We arose early, ate breakfast, and ordered a cab. What little food we still had left in our fridge we loaded into two grocery bags and left outside our kindly neighbors’ door. Despite our efforts to avoid disturbing them, they still got up to see us off. Good people are like that, dontchya know!

We arose early, ate breakfast, and ordered a cab. What little food we still had left in our fridge we loaded into two grocery bags and left outside our kindly neighbors’ door. Despite our efforts to avoid disturbing them, they still got up to see us off. Good people are like that, dontchya know!

Our luggage consisted of two enormous black suitcases, two carry-on suitcases, two backpacks, my Warwick guitar case, and my bicycle in a box. It was the antithesis of packing light. We specifically asked for a larger cab, and fortunately the SUV Radio Cab sent to collect us had enough room for all our crap—plus us—inside.

The cabbie set out for the airport through Goose Hollow, at length ushering us over the Marquam Bridge which, as if in apology for its own “freeway” homeliness, offers an arresting view of downtown Portland and the Willamette River. Skyscraper windows and flowing water alike glittered in the golden light of dawn, while each of Portland’s iconic bridges lined up to salute us farewell.

Each of Portland’s iconic bridges lined up to salute us farewell.

Nestled beneath the Burnside Bridge we could see the site of the Portland Saturday Market, where we had toiled alongside countless other artists and crafters through sweltering heat and freezing cold over the past two years. By my calculation, we set up and tore down our tent more than a hundred times down there.

We held hands in the backseat of the cab like high-school sweethearts, while the cab driver, himself from Iran, asked us where we were headed. He guessed we were moving from the quantity of our luggage. We told him we were bound for Japan more or less indefinitely, to which he nodded knowingly. He said he was working in the States to send money back to his family and missed his home something fierce.

Arriving at the PDX Airport, it took me three trips back and forth between the cab and the airport lobby just to get all our crap in the doors.

Once inside, we queued into a long line which stretched from the Air Canada counter clear to the back of the foyer, and remained stationary therein for the better part of an hour. Apparently storms up north had been wreaking havoc with Air Canada even to the point of reducing their capacity to staff non-stormy locations down in the States.

Though somewhat worried about whether or not we would be able to make our flight—or either of the two connecting flights thereafter—the counter at length showed signs of life, and we slowly shimmied our luggage up to the receptionist.

The Air Canada folks were obviously scrambling to get everyone on the move as quickly as possible, and as a result the baggage checker, much to our delight, willfully neglected to charge us oversize or overweight fees on any of our checked items, at least three of which stood in probable violation.

Three long corridors, two cups of tea, and one fiddle-dee doodle-dee in the TSA security theatre had us awaiting our flight on a bench with a window overlooking Mt. hood. 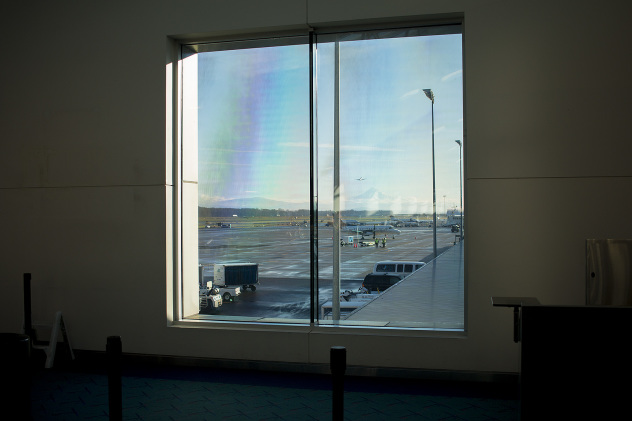 We were excited to be underway—and especially to be at long last done with the unspeakable hell that is packing.

But more than anything we felt exhausted.

Soon enough our flight was boarding. We waved goodbye to Portland and Mt. Hood, showed our one way tickets at the gate, and climbed aboard a Bombardier turboprop bound for our connection in Vancouver, B.C.

2 comments on “One Way Ticket” Add yours →