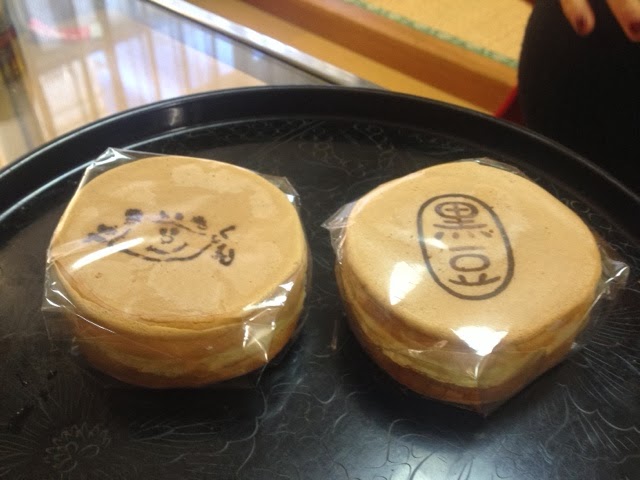 Breakfast consisted of pastries purchased from some obachans at a shop the day before, fresh fruit, blueberry bagel, some instant miso which Koji-San brought to our room in paper cups, and of course Kagome. 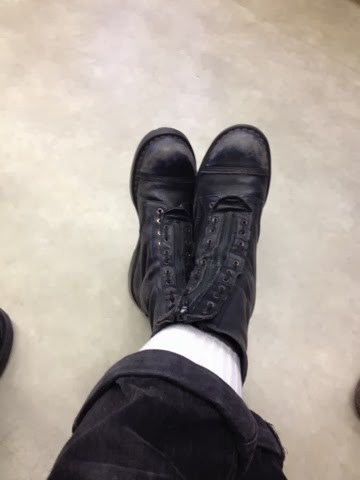 We grabbed a train, and headed out to one of the most famous shrines in Japan, Fushimi-Inari.

Quite cleverly, I’m sure, I equipped my 14-eye combat boots with lace-in zippers which I had brought from the States, since many of the places we would be visiting would require shoe removal. With these bad boys in place, my boot on/off time went from a minute or two to a few seconds. 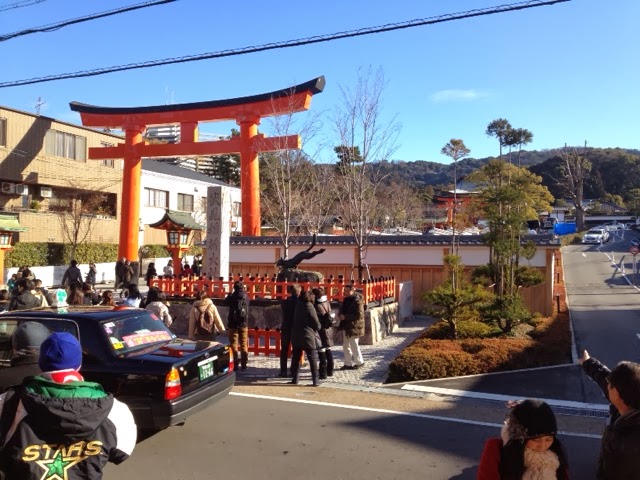 We rode the train for a short spell, and found ourselves outside a gorgeous shrine. The train and bus systems in Japan are remarkably fast, clean, and cheap, and are organized impeccably.

It’s amazing what happens when the government spends your tax money on stuff other than the dumbass military—public transportation, education, healthcare… 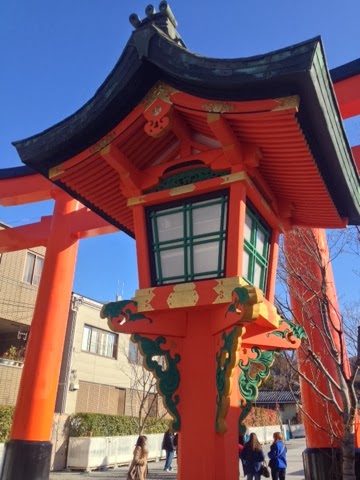 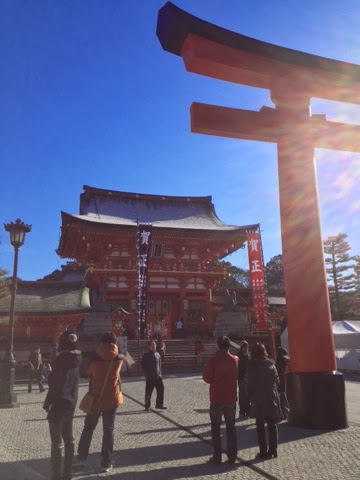 We walked through the giant Torii gates which signified the entrance to the shrine, and wandered up toward the grounds.

Already, preparations for Oshougatsu were under way, with stockpiles of rice and sake and who knows what else stacked at the ready, and shrine volunteers diligently measuring off lanes to help contain the immense throngs which would soon visit the shrine grounds in search of glad tidings and good fortune for the new year.

Here we found many statues of Kitsune, or magical foxes from Shinto mythology. Similar to foxes in Western traditions, Kitsune are often tricksters and shapeshifters, however certain famous Kitsune are special messengers for the Okami, those being the most important and powerful of the Shinto gods.

The Kitsune which serve the Okami generally carry an orb of power in their mouths or balanced on the ends of their tails, and are always agents of good. Dealing with any other type of Kitsune, however, is more of a gamble, according to legend. 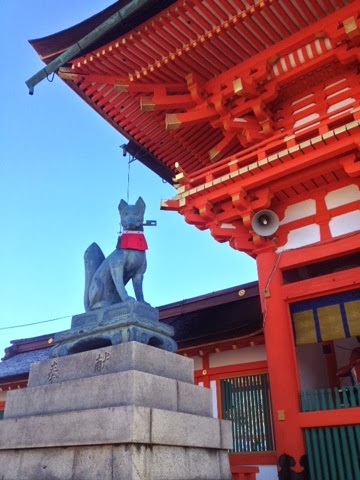 I am beginning to get used to the immense number of people constantly gathered at every location. Like us, they are talking, laughing, participating in the various traditions, purchasing food items and souvenirs, and of course posing for photographs in front of any and every notable feature, which, at the shrines and temples of Japan, are numberless.

I can see how this aspect of Japan might stress out some Westerners, but to me at least… it ain’t no thang. 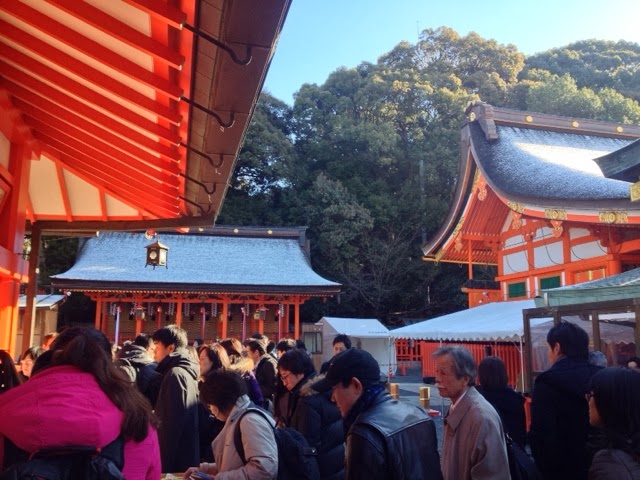 At shrines and temples alike, you will find facilities for a hand washing ritual unique to the Japanese.

Taking up a long-handled water cup, usually composed of bamboo, you fill the cup from one of the water spouts and pour it over your left hand; refill, and pour over the right hand; and lastly you place some water into your left hand, sip it, and then spit it out. Rinse your left hand once more, and then tilt the cup upward such that any remaining water in the cup flows over the handle. With this done you are, theoretically anyway, fit to appear before and address the gods.

They ain’t liking no dirty muthafuckas up in they grill. 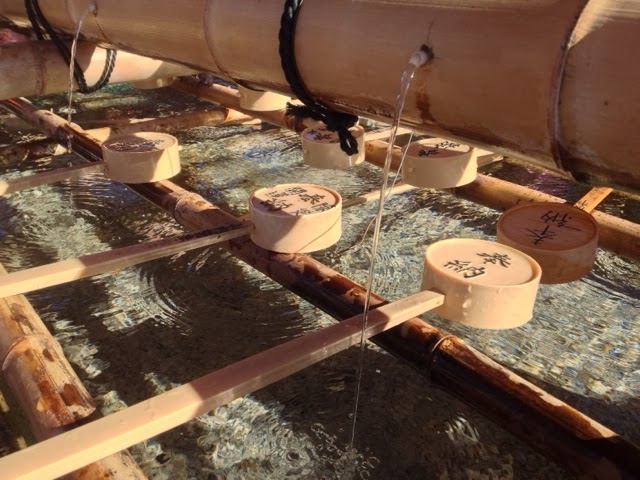 With hands rendered fresh, you may then proceed to any of the various areas where people give thanks to the resident deities of the shrines. These places generally consist of a box into which you toss a coin (five yen coins are presumed to be the most appropriate for such purposes), ring the bell (if there is one), and then bow twice, clap twice, pray… And then bow once more.
Little places to indulge in this particular ritual can be found everywhere in Japan.
Many people also like to purchase charms at Japanese shrines, including special ones which you write on and hang up at designated displays on the Shrine grounds. Fushimi-Inari has thousands of Torii gates ranging all over the mountain upon which it is situated.
We purchased an appropriately Torii-shaped charm, and wrote wishes for the local dirty-hand-hating diety, Inari Okami, whose name I learned by asking one of the accolytes nearby (in Japanese, I might add).
With this information, a quick iPhone enabled Google search revealed that this particular Kami, one of the most famous of the Kitsune, is the god of harvests, and also probably of busting a cap if your hands be dirty.
Due to the significance the harvest aspect shares with the novel I am currently writing, I wrote a wish requesting success as an author; the Princess requested success with her jewelry making; and we both requested to have a happy life together.
We hung our wish totem upon the wishing wall, and bowed in respect. Were I inclined to believe in any gods, Shinto or otherwise, I would not presume to think that my own wishes would weigh particularly heavily in the cosmic scale to which such an entitiy’s attentions must necessarily be at all times devoted.
However, should Inari Okami deign for a moment to assist such endeavors as we attempted to bring to his attention, it is my hope that he will find us diligently working on them already. 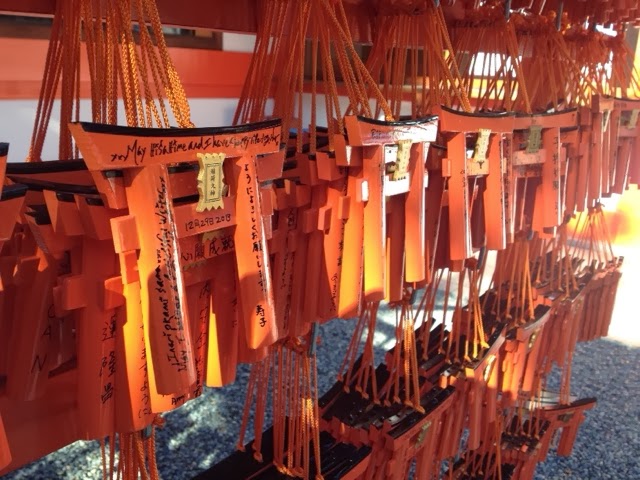 In addition to sightseeing, and of course grovelling for divine intervention, we had another motive for visiting shrines and temples in Japan—namely, to add to the collection of stamps in the shrine book which my beloved aunt Atya imparted to us prior to our departure for the Land of the Rising Sun.

She had already filled out seven pages, and we are determined to make a significant addition before we leave. 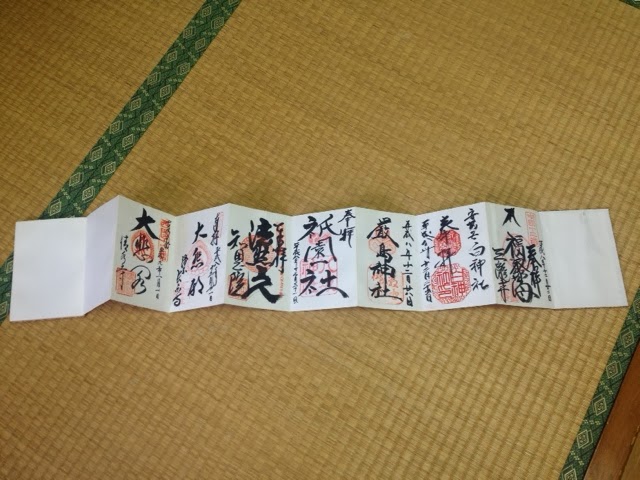 For those not yet in the know, at all the major temples and shrines in Japan, one can have a monk or preist, accordingly, write the name of the holy site in beautiful calligraphy above a stamp specific to the shrine.

Fushimi-Inari marks our first addition to this lovely memento. 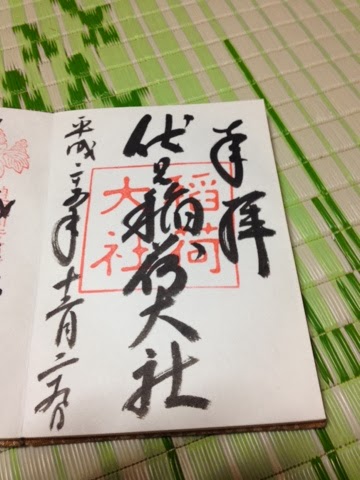 Walking through thousands of Torii across a Shinto mountain is an experience like no other. 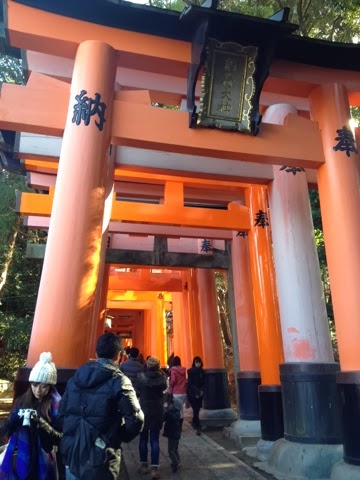 The effect of seeing the beautiful shrine grounds shifting by behind the red pillars of the innumerable gates, while at the same time strolling beneath their gorgeous arches has something in it otherworldly. 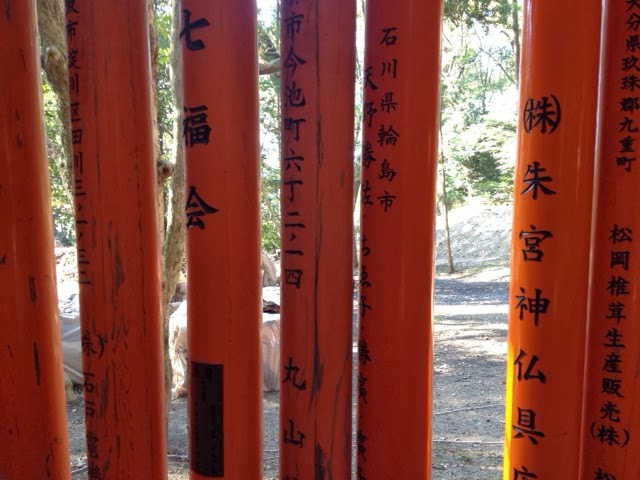 We stopped for some sort of hot sake drink which, as it contained no alchohol, I was happy to partake of. It was sweet, with little rice bits floating in it.

We drank happily, and pressed on, traveling through yet further expanses of Torii lined pathways across the mountain home of a god.

As much as we desired to traverse the entire breadth of the mountain, we had a very important luncheon date, and thus were forced to divert back to the entrance without making the complete loop.

Next time, Great Inari, next time! 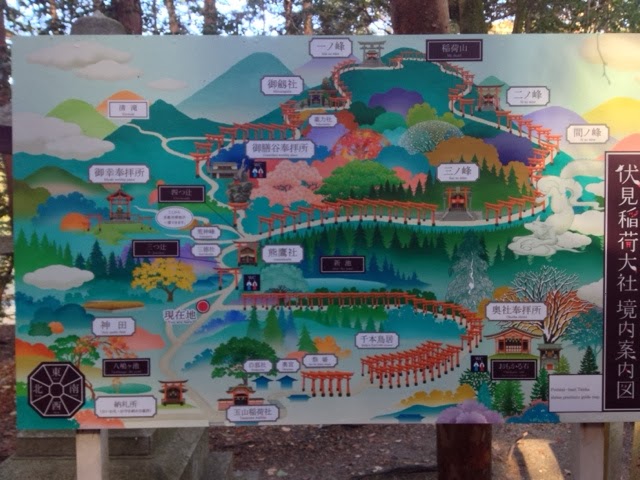 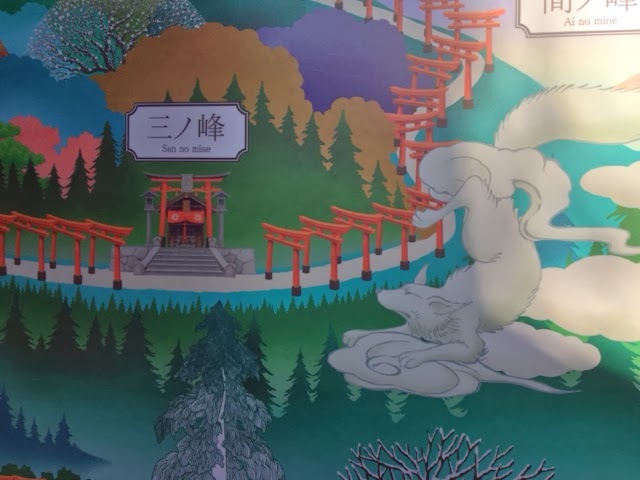 We exited the shrine grounds, and caught a train into downtown Kyoto to meet Miako, the vegan jazz monk, for lunch!

0 comments on “Inari Okami” Add yours →