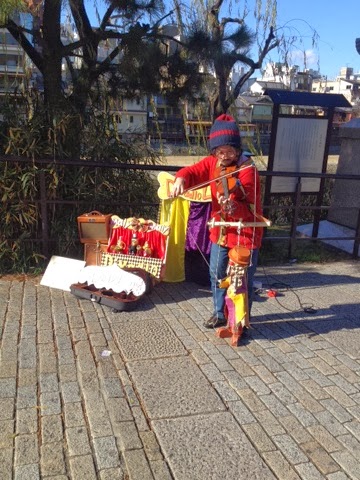 Along the way, we happened upon a street performer whose primary act was a marionette which would fiddle along as he scraped out old Scott Joplin tunes on the violin. Upon seeing me, he exclaimed, “Kakoii!!”, meaning “You’re cool!!”

Being a punk in Kyoto ain’t half bad, I tell ya. 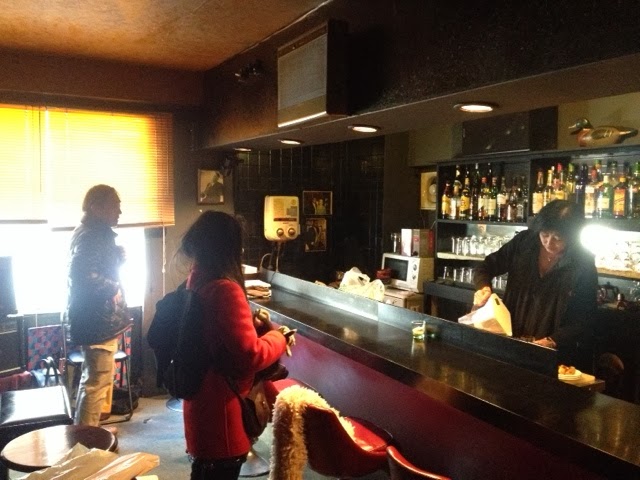 We arrived, climbed a flight of steps, and knocked on a door through which the sounds of muffled jazz could be heard.

No sooner had Miako-San opened the door than delicious aromas wafted over us. She ushered us inside a bar space which, like every other place I had yet been to in Japan, was characteristically small. However, instead of the neat and orderly appearance of the other Japanese eateries I had been to or seen, this pad was packed with instruments and vinyl records, exhibiting—dare I say it—a bit of a Portland vibe.

She turned down the stereo, and invited me to play a dusty old guitar tucked in the corner of a bookshelf, to which suggestion I happily complied, singing and picking out a few old tunes while she finished the preparations for our meal. 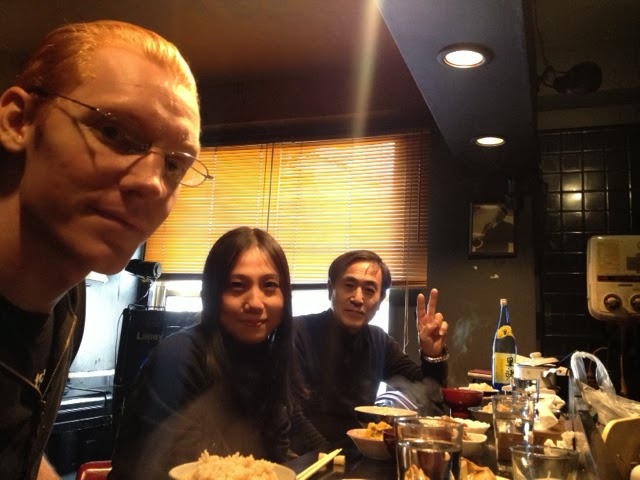 Miako-San made three separate sets, a different one for each of us, and as we ate she related her story to us (most of which I have already divulged in the prior blog entry entitled Everybody Wants to Be a Cat).

Though she explained that the extensive damage the fire had caused to her hands and arms had somewhat hindered her ability at the piano, it did not stop her from hammering out a few tunes on the upright behind us, including a wonderful rendition of the Japanese classic Furusato, during which she skillfully shifted from the formal cadences of the original to fullly jazz-infused improvisation.

The effect was pure magic. 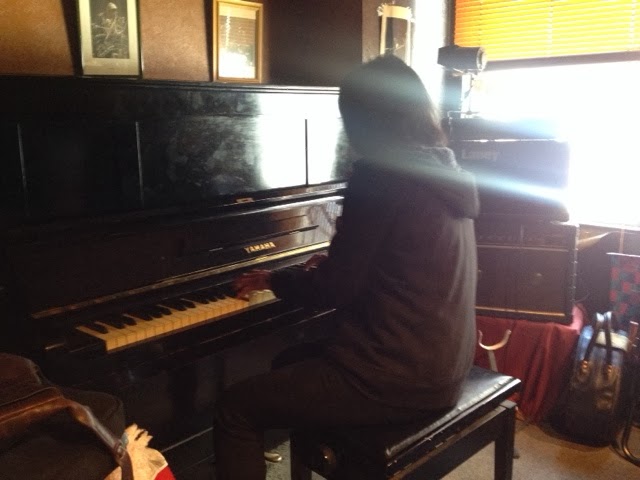 Miako-San discussed also some of her techniques for being vegan/vegetarian in Japan, and offered some advice to me.

Throughout this, I could not help but notice that her manner was quite reserved, far more so than other Japanese people with whom I had thus far interacted. Whether this was due to her injuries, or her personal nature, I cannot with accuracy conjecture. However, I’d like to think that her demeanor was a reflection of her background as an ordained Buddhist monk, the experience of which would certainly necessitate a deep detachment from worldly desires and emotions.

Or who knows, maybe crustpunk gaijins just make her uncomfortable.

Being vegetarian in Japan, let alone vegan, is a tough gig unless you can cook all your own meals (and, of course, accurately read all the ingredients on everything you buy). Most Japanese people don’t really know what vegetarian cuisine is, nor are they particularly aware of which ingredients would or would not constitute a violation of vegetarian or vegan principles.
From what I’ve gathered, most Japanese people understand vegetarians to be people who do not eat chicken, pork, or beef. Fish, from what I can gather, is basically just another vegetable as far as most Japanese people are concerned.
And man, it is in EVERYTHING.
Kinda like corn in the States. Fish is the Japanese corn. It’s a massive national industry, and if there is any possible way, no matter how remote, to insert it into a product, by gory, by gingo, by gee, by gosh, by gum—they will!
There are essentially two main reasons for this, from what I can discern. One, fish has been central to the island dwelling people of Japan since time immemorial; and two, Japanese people are deeply concerned with observing and participating in the practices of the Group.
No one wants to make anyone else feel uncomfortable, and so exhibiting a diet which flies against thousands of years of Japanese tradition—a tradition reinforced in modern times by a monolithic national industry—is basically a major fucking taboo.
You know that phrase, “The nail that sticks out gets hammered down?” That saying was originally translated from Japanese (not kidding).
However, the veggie climate is slowly changing in Japan, as more people grow health, animal, and eco conscious, and from what I can gather, Kyoto is the epicenter from which these winds of change are blowing (just check happycow.net!). There are beginning to be more veggie restaurants, organic food markets, and meat-free options in Japan. However, having come from Portland, which is essentially Vegetarian Mecca, there’s still a lot to be desired.
Before even setting out for Japan, I had resigned myself to certain sacrifices. For example dashi, a fish-based seasoning central to Japanese cuisine, is in pretty much everything, and in order to completely avoid consuming it, I would more or less have to become a compete pain in the ass to Hisako, Hisako’s family, and every single waiter, waitress, or chef whose doom it would be to encounter me during my travels.
As it is, Hisachan’s mother went out of her way to figure out how to cook meat-free dishes for me, and barring the select few veggie restaurants mentioned above, and perhaps a handful of pre-packaged snack foods available at convenience stores, I would be S.O.L. You’ve gotta pick your battles, dontchya know, and I am currently fighting to be someone whom Hisako’s folks will want to invite back to visit again one day.
Besides, I came here to experience Japan, and for the time being, at least, this is an unavoidable part of it. I also think that one must be a very special type of unrepentant asshole to go to another country, and then expect the people there to throw their multi-millennia old culture out the window and bend over backward for you just because you happen to do things differently where you come from.
Boo-friggidy-hoo, right?!
But on the other hand, you’ve gotta be true to your own principles too. However, I don’t think that animal rights, human rights, or environmental rights will be furthered by my acting like a dick, nor will such behavior bolster acceptance for any locals who share my sentiments.
In addition to the dashi problem, there’s also a ghastly tendency to season otherwise meat free dishes with fish and/or pork shavings… But at least you can politely scrape such things off when no one is looking. 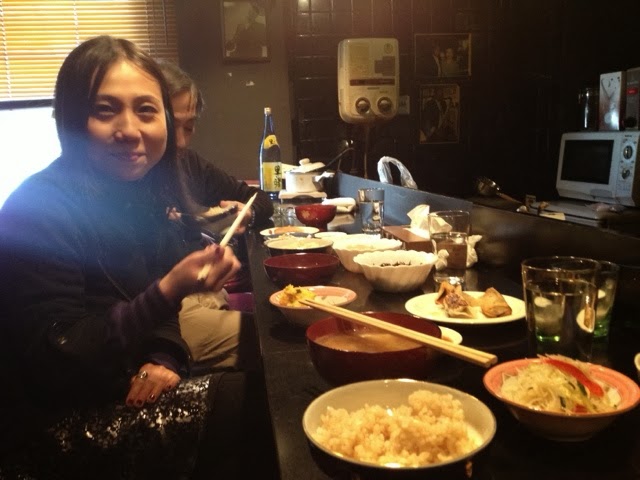 In any event, Miako-San’s cooking was unspeakably delicious, and to be honest, there were so many tiny dishes on the board, each more delicious than the last, that I was unable to keep track of what was what. The names were doubtless uttered to me during all this, but my Japanese was too inadequate, and my foodgasm too fierce, to be capable of retaining any of them.

The good news is that Miako-San will likely be taking over at Jazzmass (and may possibly change the name to Mikouan when she does, for those who need to be in the know).
She also has a cookbook in the works—FUCK YES!!!!!
But for now, if you are planning a trip to Kyoto, whether you are veggie, vegan, or carnie (i.e. “carnivore,” or possibly “carnival freak” depending on the context), hunt down Miako-San, and have her cook a meal for you.
And if you are not planning to go to Kyoto—make a plan to go to Kyoto NOW.
Hisako and I decided to make it our treat, and the total for three sets was around $40 USD. I’ve paid far more for meals greatly inferior.
Arigatou gozaimasu, Miako-San! 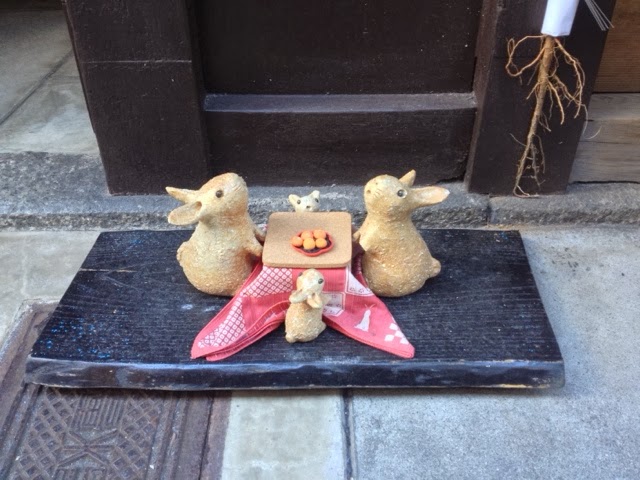 4 comments on “Veggie-Core in Kyoto” Add yours →