*** Mt. Misen, Part I ***
Awoken by our iPhone alarms at 2:30am, we clambered as from an unhallowed grave to dress ourselves, and elope into the night.

Awoken by our iPhone alarms at 2:30am, we clambered as from an unhallowed grave to dress ourselves, and elope into the night.

Wearily stumbling through the streets, we dragged our heavy feet across the few blocks which separated us from Hiroshima Station, and there met the three other unfortunates who had chosen to undertake this sleepless project with us: Miki-Chyan, Piro-Chyan, and Asa-Chyan, Hisako’s Hiroshima High School buddies.

This group of intrepid ladies, along with The Princess of course, make up “Hiroshima Copu,” or Hiroshima Coop., their own self-appointed title for, well, themselves.

Miki-Chyan (pictured below) met us first, while the others joined us at other stops along the route. (Apparently there was also some kind of “Ass Sale” going on at the time! Grab ’em while they’re hot, I guess!) 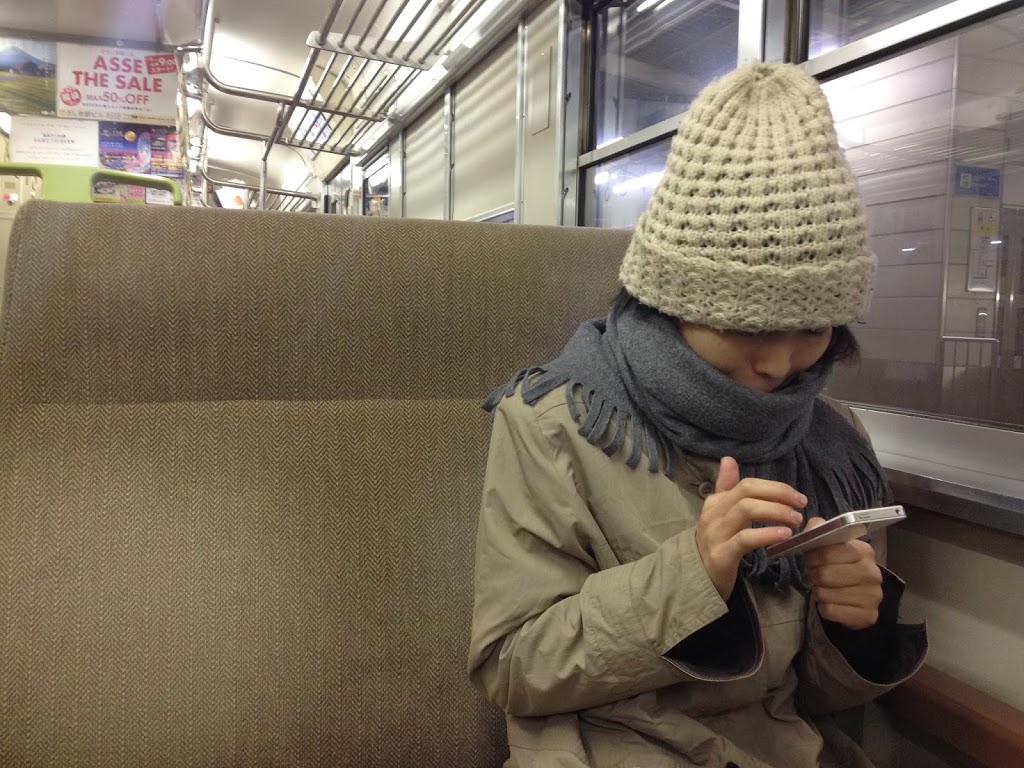 Despite the late hour, quite a number of other masochistic sightseers had also soldiered to the station.

I’m not sure if the trains were running at so murky an hour of the night specifically because of the insane throngs indulging in this particular New Year’s tradition, or if they just run all night all year round. In Portland, at least, everything shuts down shortly after midnight at the latest, holiday or no.

Together we climbed into a train bound for Miyajima, island home of one of the most famous and beautiful shrines in the world, above which towers the lofty peak of Mt. Misen. Before the dawn, we would ascend its heights, and from that vantage witness the great Amaterasu herself, Shinto Goddess of the Sun, climbing into the heavens for the first time in the new year. 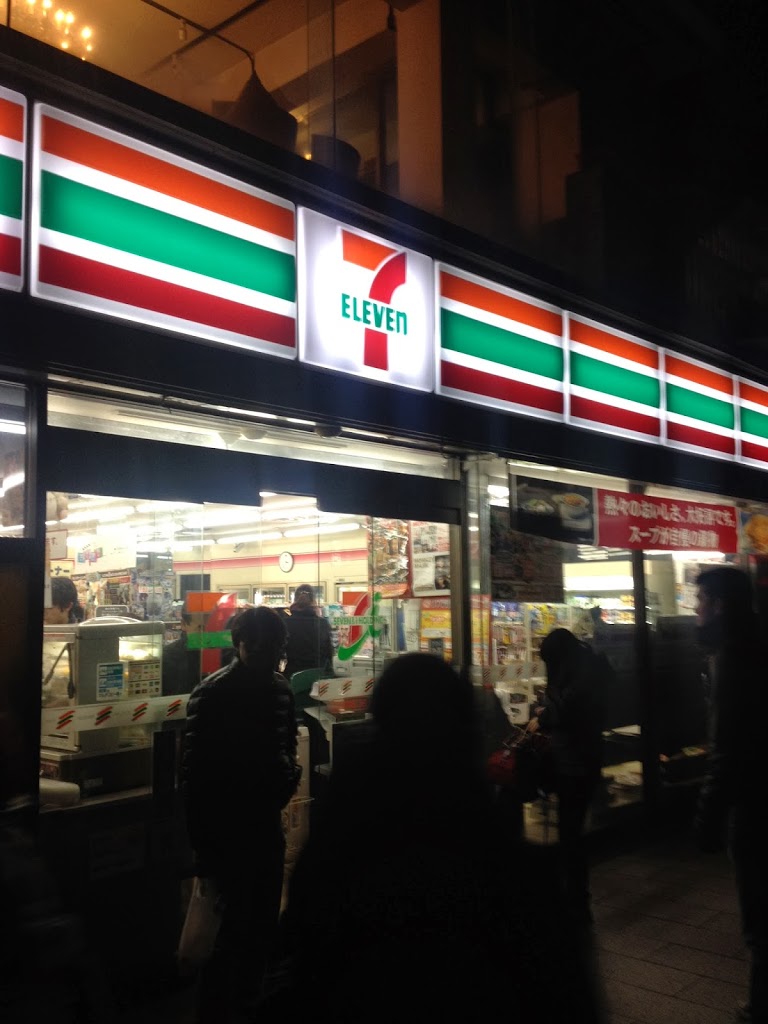 Of course, Miyajima being an island, our train stopped short, and we were forced to clamber out to a ferry that would, well, ferry us the rest of the way. Before boarding, we grabbed snacks from a “conbeenee,” this time a Seven-Eleven, before hopping on the ferry bound for Miyajima. 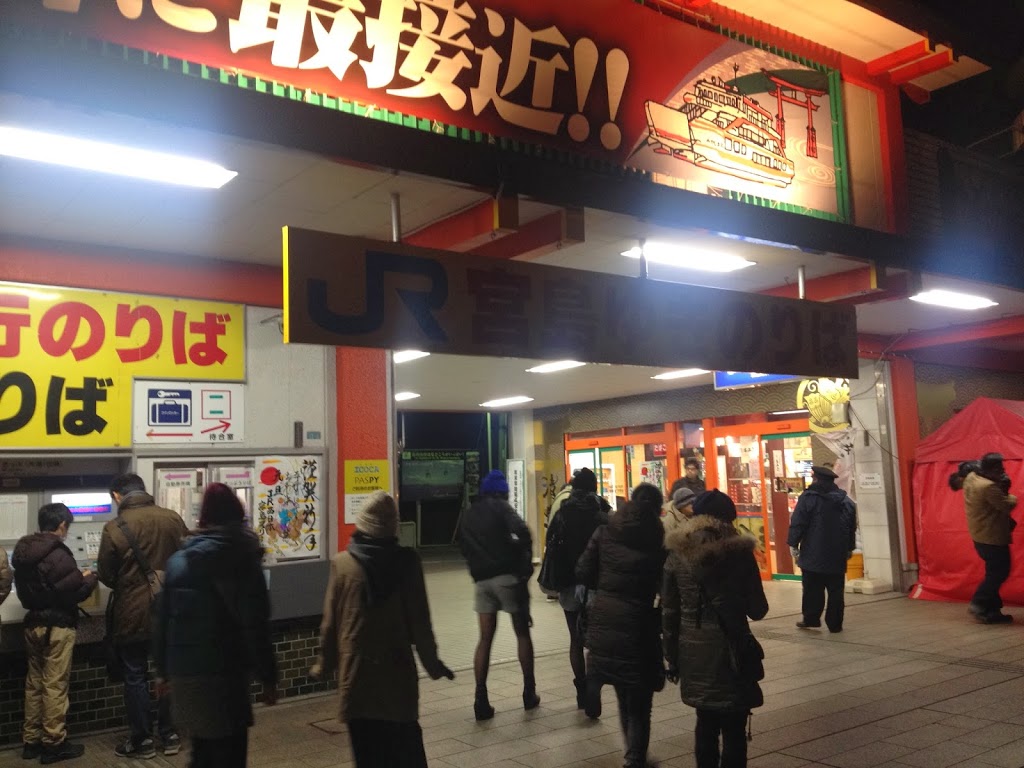 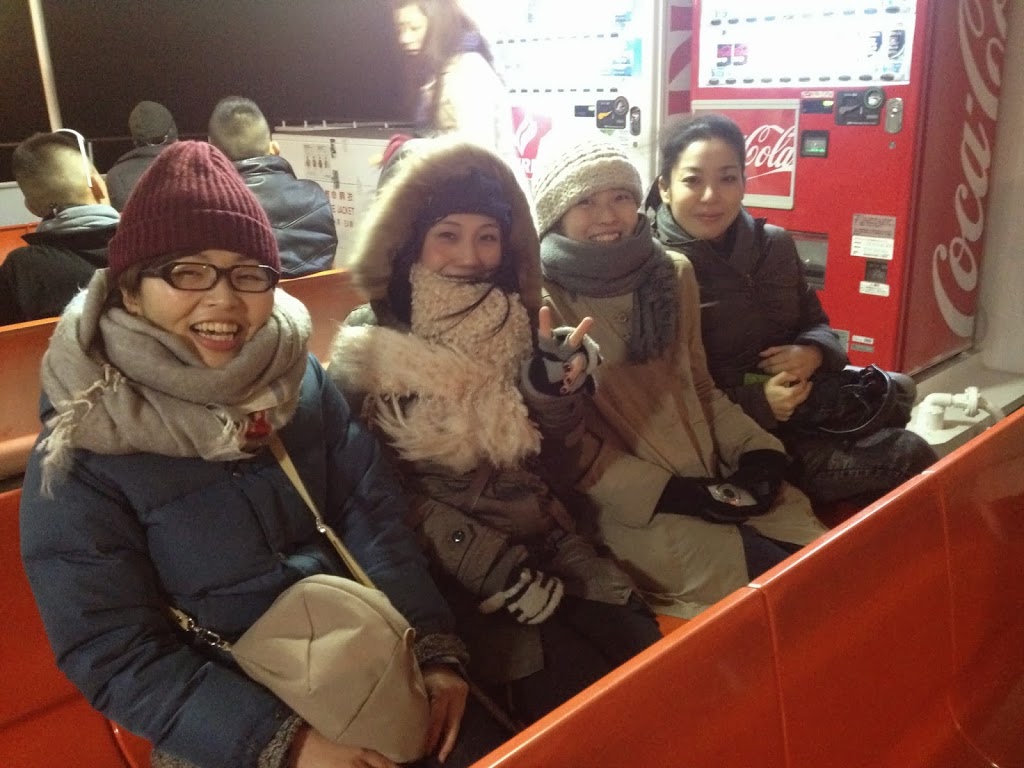 The air was cold and windy, filled with the salty tang of the sea. We found the pathways of the island well lit, and lined with food stalls selling croquettes, tempura, and various forms of cooked animal corpse. 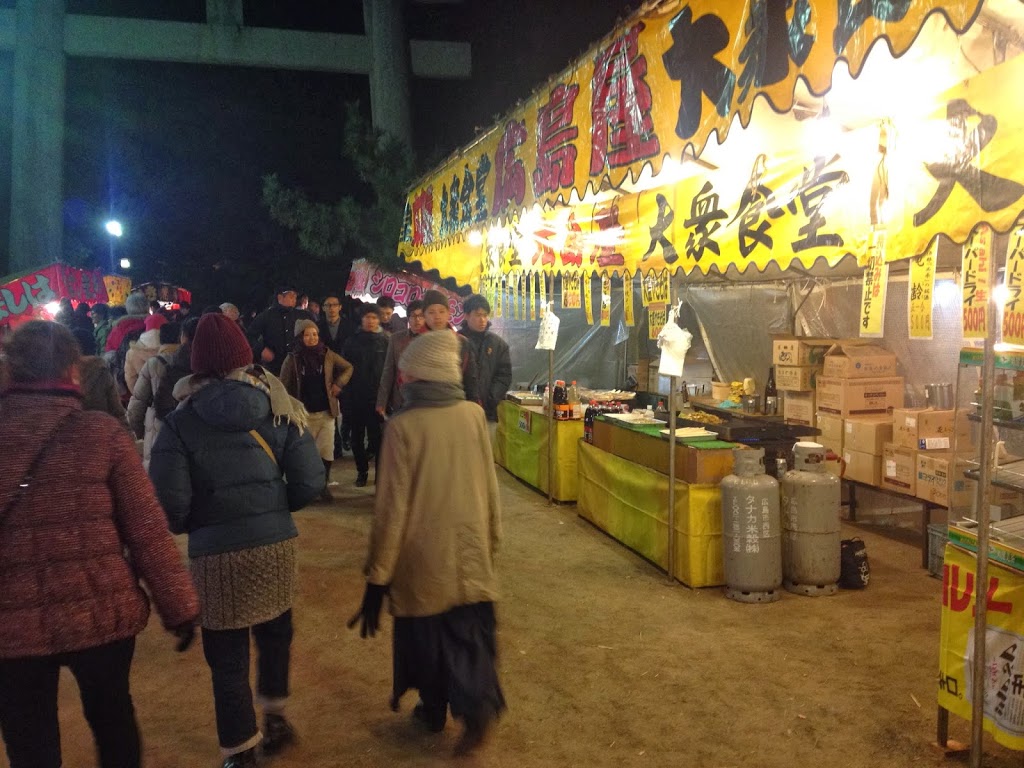 It was around this time that I had my first “Shika-Chyan,” or “deer,” sighting. Yup, there were deer.

But do not be fooled by cute looks! According to legend, these cuddly-wuddly monsters will leap from the shadows to devour every morsel of food in your possession. Like hungry, furry, four-legged ninjas.

Of course, in the West there’s a legend that some dude who got nailed to a tree will magically come back to life one day, so you can’t always believe what the locals tell you. From what I saw, these furry fellows were sleepy and used to being petted and photographed.

One particular point to note is that Japanese culture is a practice in subtlety. Meanings are more often implied than directly stated, and strangers rarely speak to one another outside the performances of their various job duties. When the obachan in Gion fed me her bento, Hisachan described her as “aggressive.”

So I could be mistaken on this one, but I’m pretty sure that what passes for “aggressive” to the Japanese is probably just mild forwardness in the West, such as a deer that approaches you in hopes of a handout. But hey—maybe when they’re not sleepy they bite your limbs off unless you distract them with tempura.

Japan is a weird place sometimes.

In any event, according to Shinto beliefs, deer are messengers of the gods, and so these deer, whether aggressive or otherwise, are sanctioned by the Okami themselves to roam around and eat whatever the fuck they want, so y’all best recognize!

Word has it that there are also monkeys. But where they are, none can tell.

According to Miki-Chyan, the monkeys were forcefully evicted from Miyajima, since they had, like the deer, adopted a propensity for dispossessing people of their food, yet unlike the deer, were messengers not of the gods, but rather of actually very violently attacking you in screeching relentless swarms.

I guess we’re the only monkey’s here now.

I purchased some sort of sauce-laden vegetable concoction on a stick, called “hashimaki,” devoured it like a vicious monkey, and marched on. We were all more or less lively at this point, and happy to be embarking on such an epic journey together. 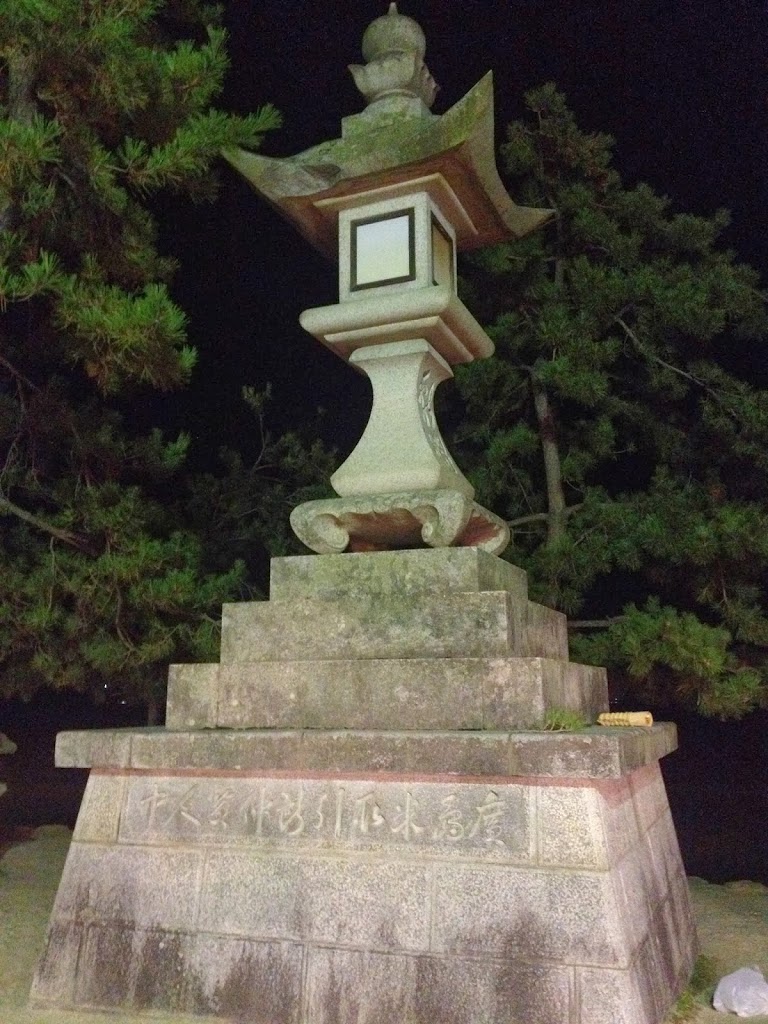 We rounded a corner, and saw rising from the ocean floor the distant arches of the famous Miyajima Torii gate, so often depicted on postcards and in photographs. 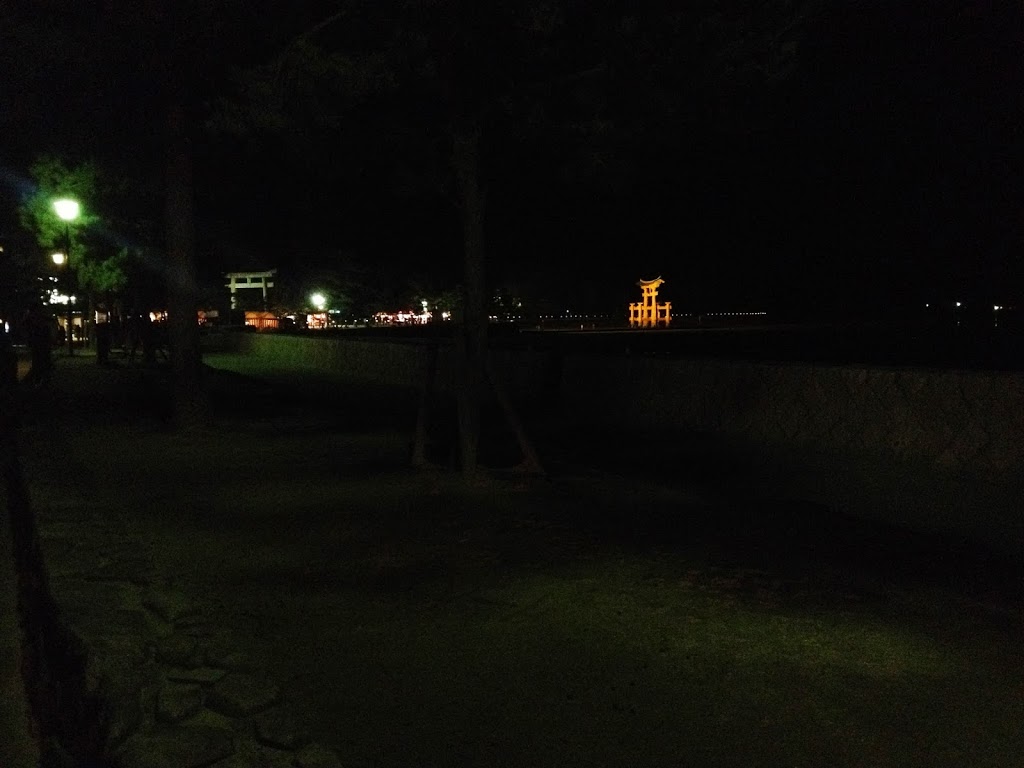 As we continued on, ancient stone lanterns began to appear alongside the path.

We could see that the tide was low, and people were walking out to pay their respects to—and of course also to take photos of themselves in front of—the gate.

And you know, when in Rome… 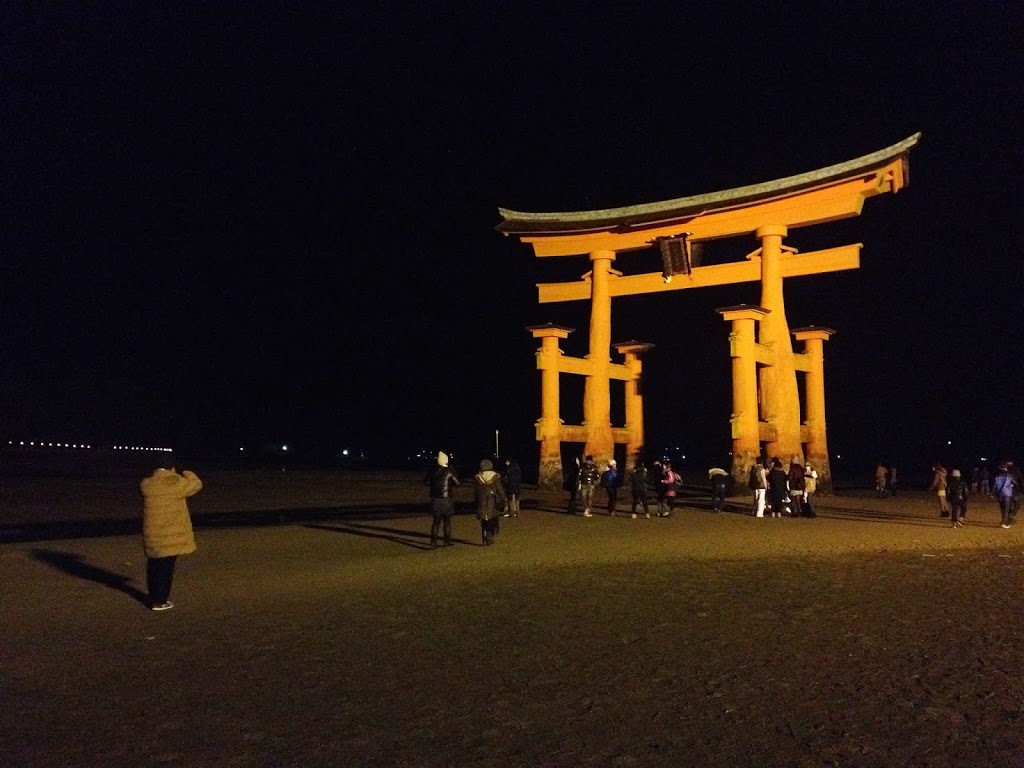 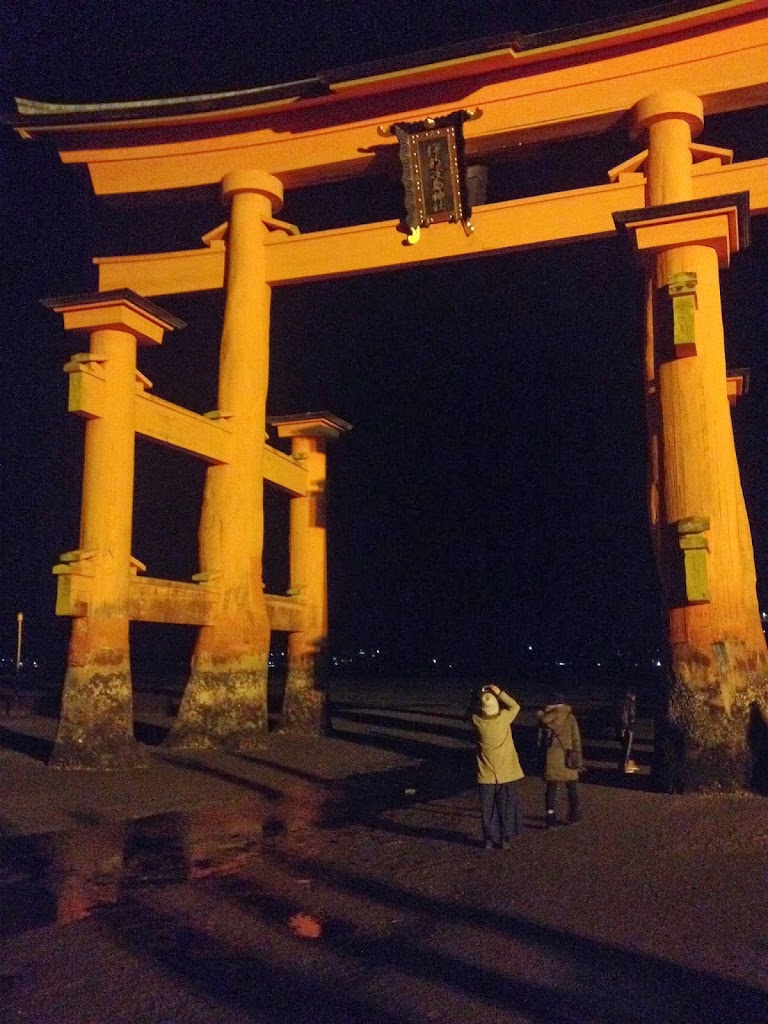 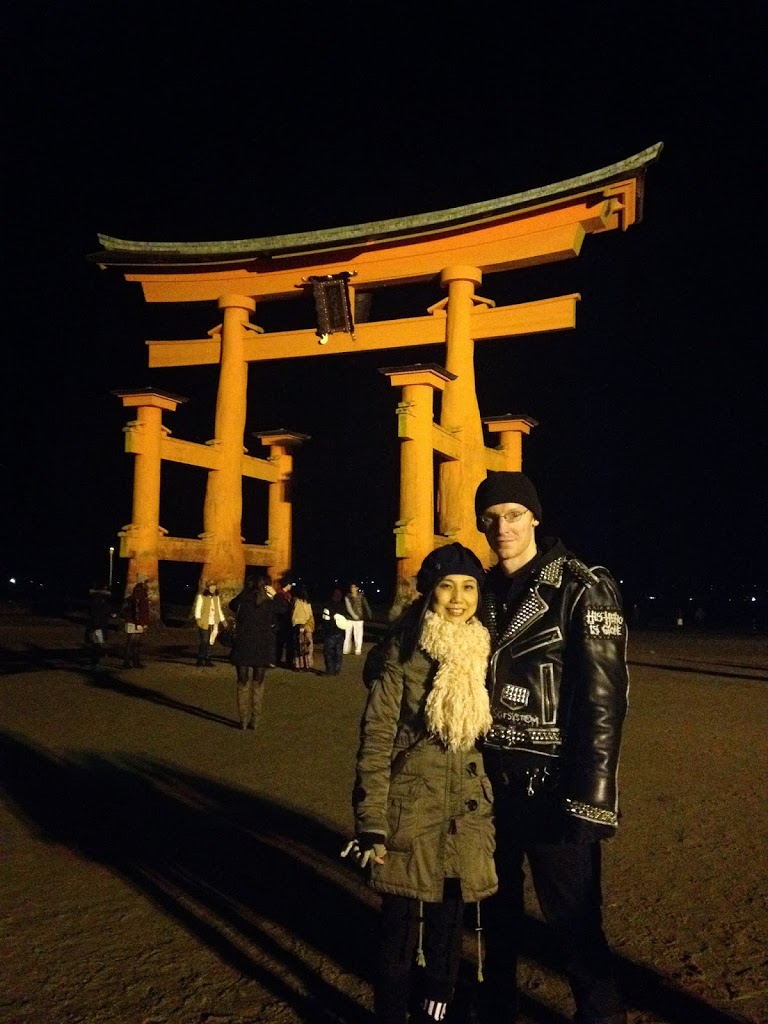 I will never forget the awe I felt standing beneath this incredible, ancient homage to the gods—this place in the bay, washed by the mighty sea, where a Shinto gate has stood for nearly nine-hundred years!

Though my iPhone was unable to do it justice, the sky above the Torii was lit with stars.

By the time we would reach the top of Mt. Misen, the shining Sun Goddess herself would be rising in the sky to greet us!

At the base of the gate, the sea-swept earth of the bay glittered with countless five-yen coins cast thither to the gods. The Princess and I, too, threw our own coins directly into the center beneath the Torii, where they splashed quietly into a rivulet of sea water left shimmering in the night. 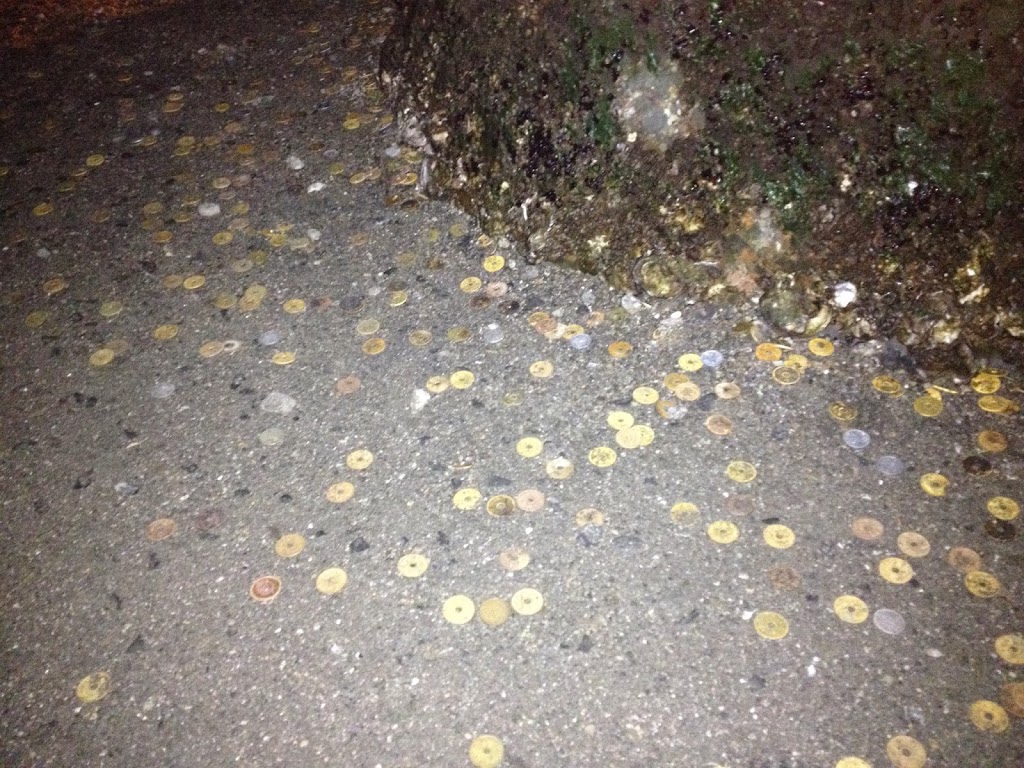 Five being a lucky number more or less everywhere in Asia, from what I understand, the five-yen coin in particular is considered to be ideal for establishing a connection with the god to whom, or shrine to which, it is given as an offering. In fact, the Japanese pronunciations for “five yen” and “deep connection” are the same—”go-en.” 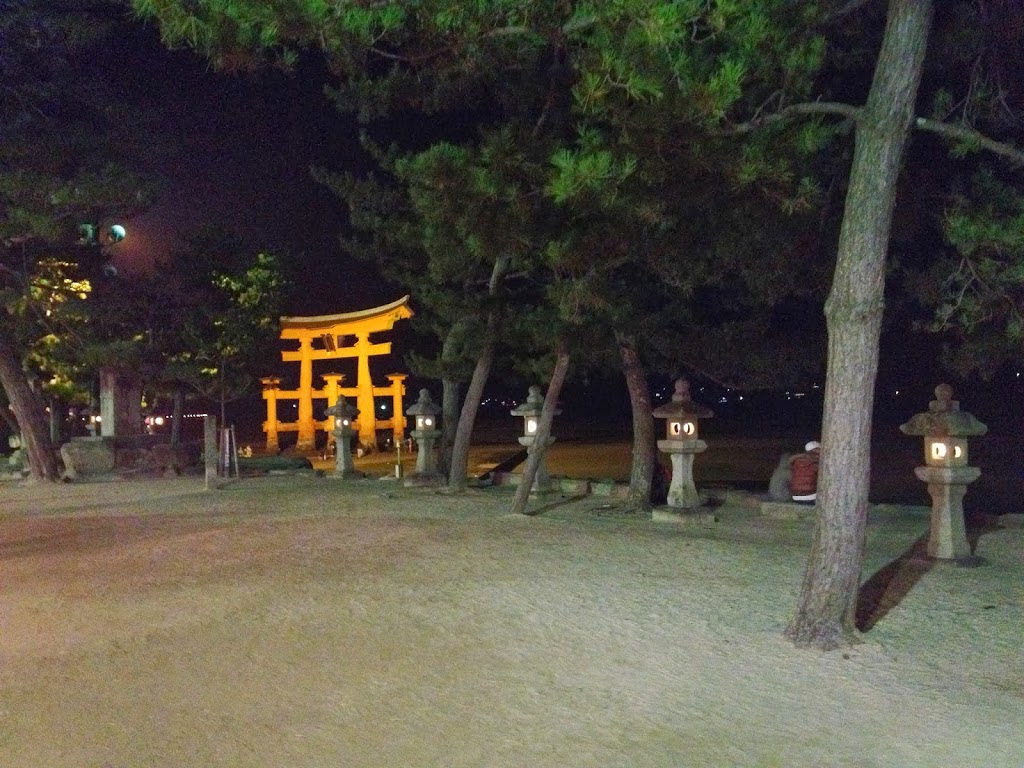 Here we also found the formidable Komainu (gargoyles) where they keep eternal watch over the sanctity of the Shrine’s holy grounds.

Though it is not required, if one wishes to make a connection with, or pay special respects to, a kami (i.e. god/spirit) embodied within a statue found at a Shrine or Temple (Komainu included), there is a particular protocol for doing so. You must touch the statue with your right hand, or with both hands, never with the left alone.

Additionally, if the statue stands beyond your reach, you may instead apply this procedure to the pedestal upon which it is stationed to achieve the same effect. 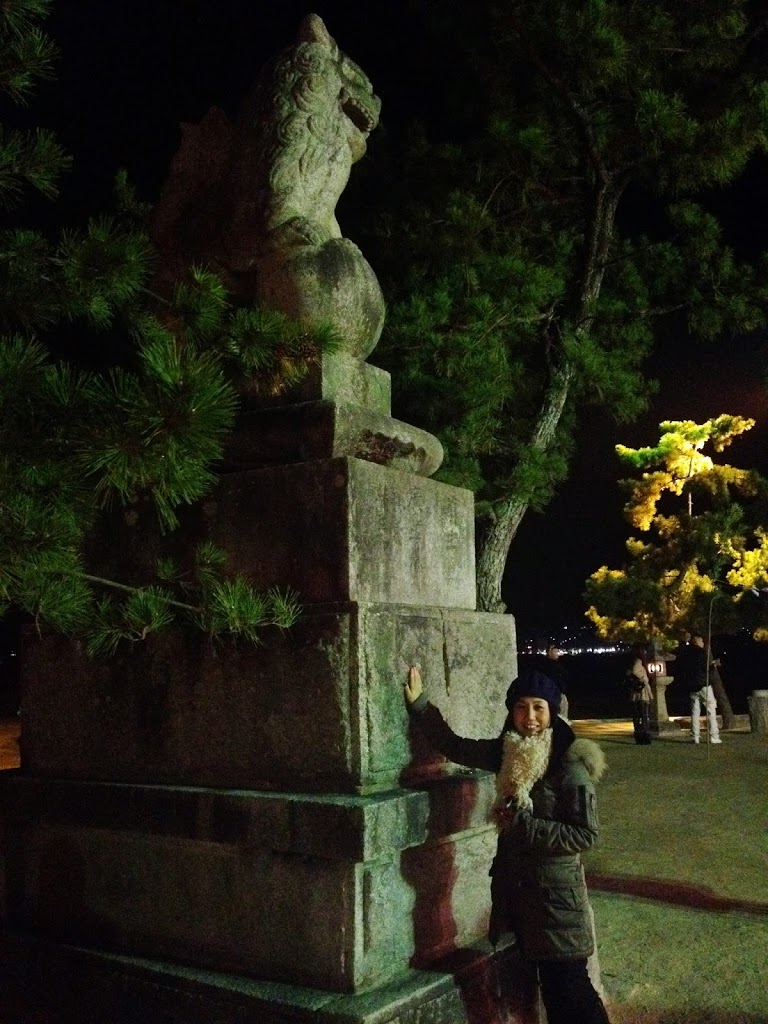 It is impossible to describe the beauty abounding everywhere you look while strolling down the paths of Miyajima. 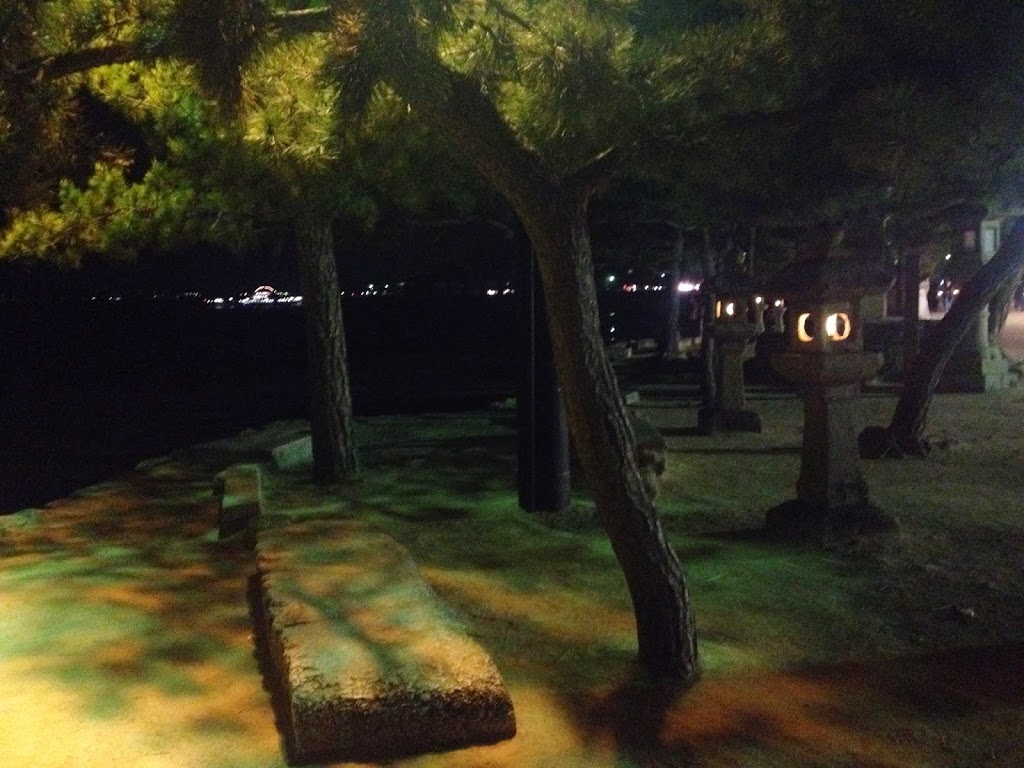 Existing in its present form since the mid-16th Century, Miyajima has been recognized as an UNESCO World Heritage Site, yet has been a place of Shinto worship since time immemorial.

The beauty of Miyajima is breathtaking. Almost unreal. There is nothing else like it in the world. 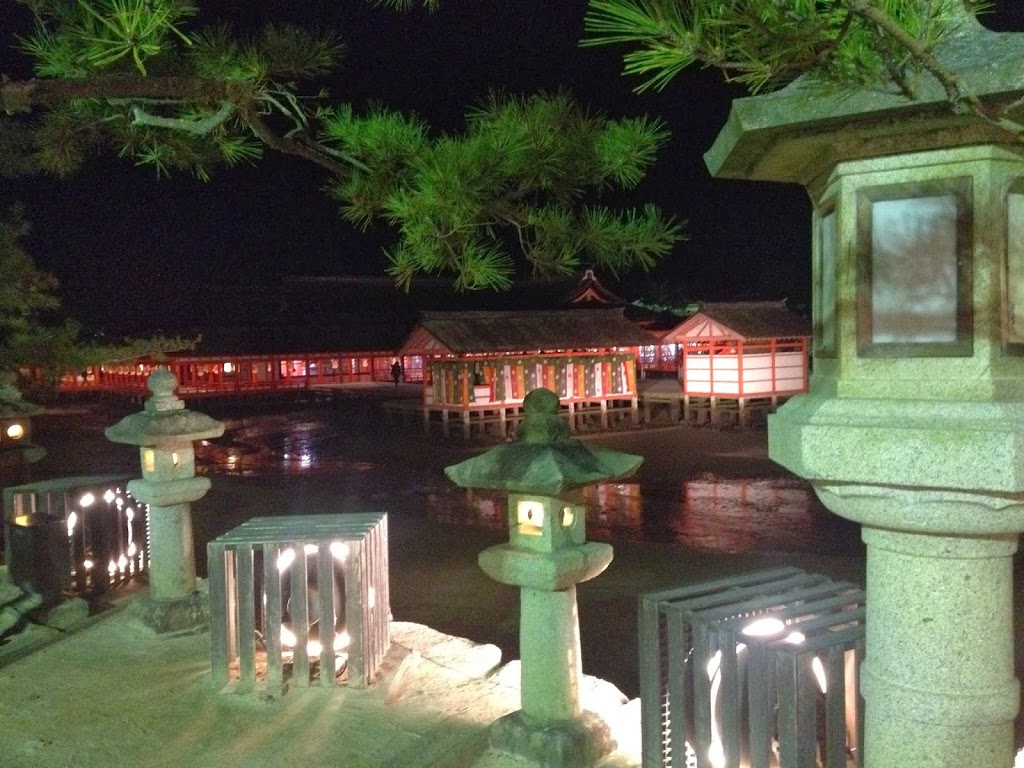 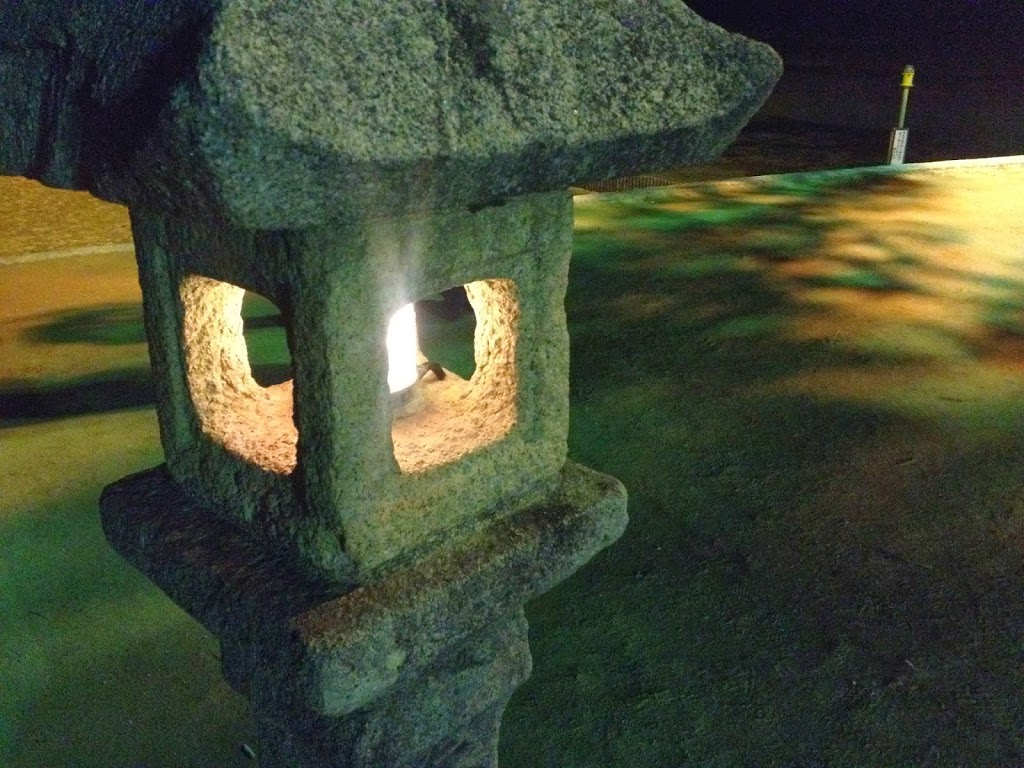 A little further along, and we arrived at a hand washing station.

Though it was a cold and windy winter night, no one neglected to wash their hands before entering the sacred site, lest they get lit up by a rage-filled Kami packing the heat of the gods. No gloves allowed after that, either. 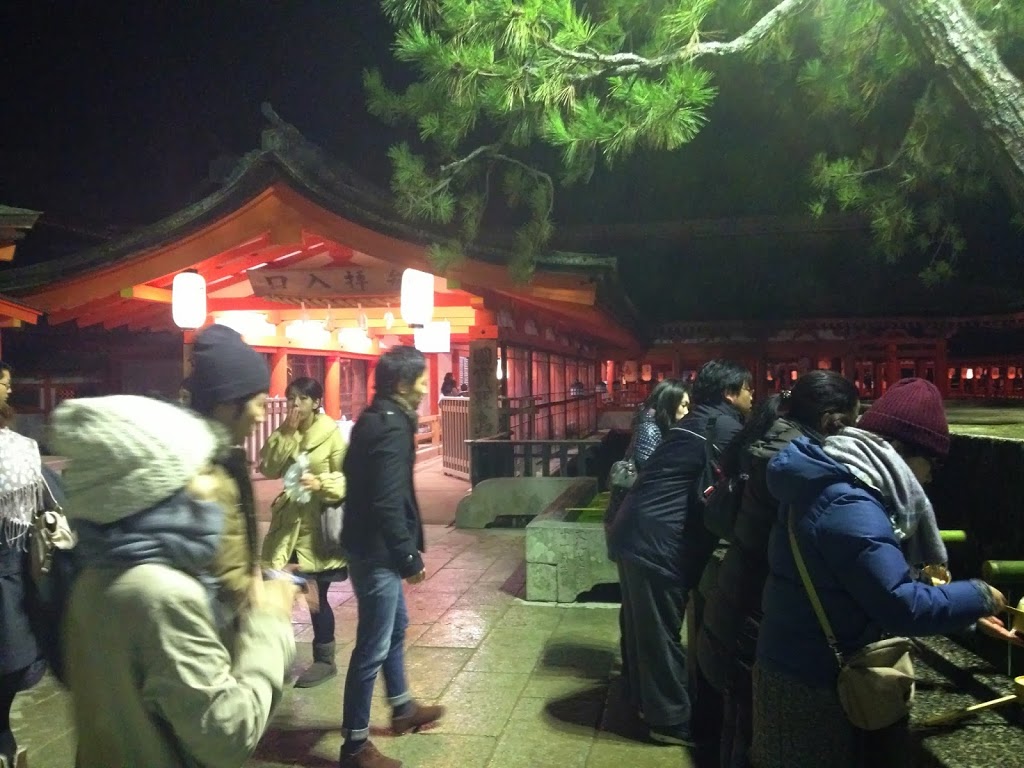 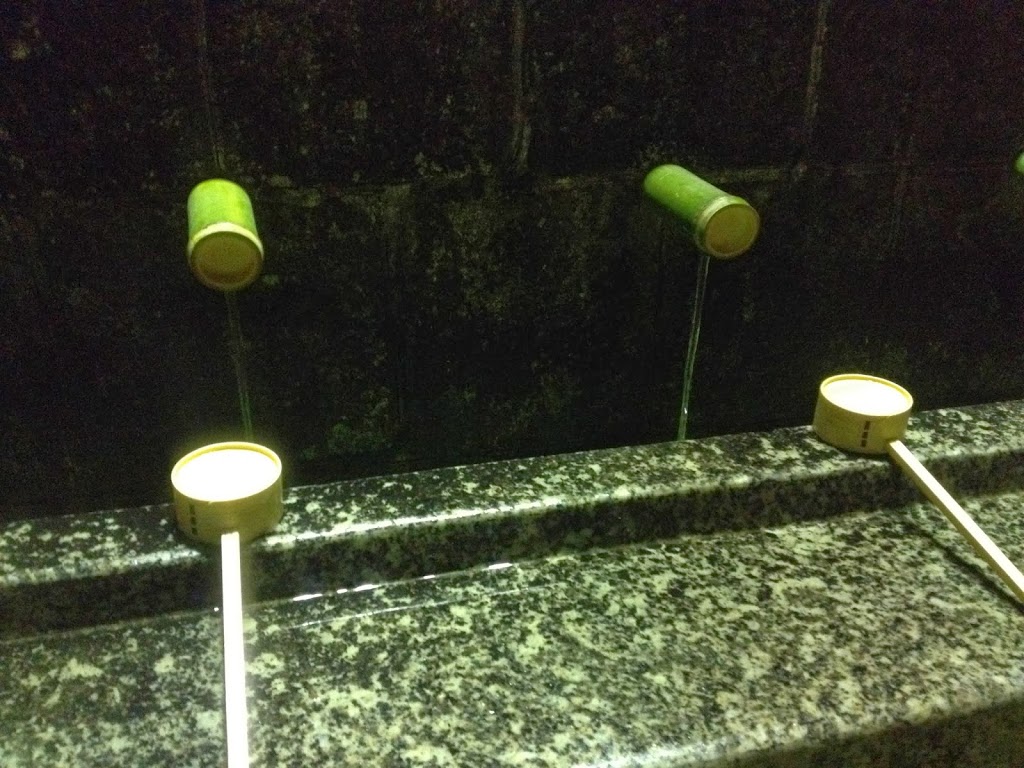 After paying a modest admission fee, we were given lucky New Year’s ass-paddles, and ushered inside. Upon inquiry, The Princess informed me that these wooden tools are in fact rice-scoopers, and not ass-paddles.

As legend has it, a monk who long ago lived on the island of Miyajima is reputed to have invented a special rice-scooper which would not alter the flavor of the rice upon scooping. Apparently at the time this was a Really Big Deal.

Though official records conflict on the subject, there is evidence which places the invention of the ass-paddle in roughly the same historical time period.

Throughout the Shrine, clusters of holy Shinto confetti dance upon the ocean breeze.

At one place, there was even a self-serve confetti-blessing station. And MAN did we tank up on good luck! 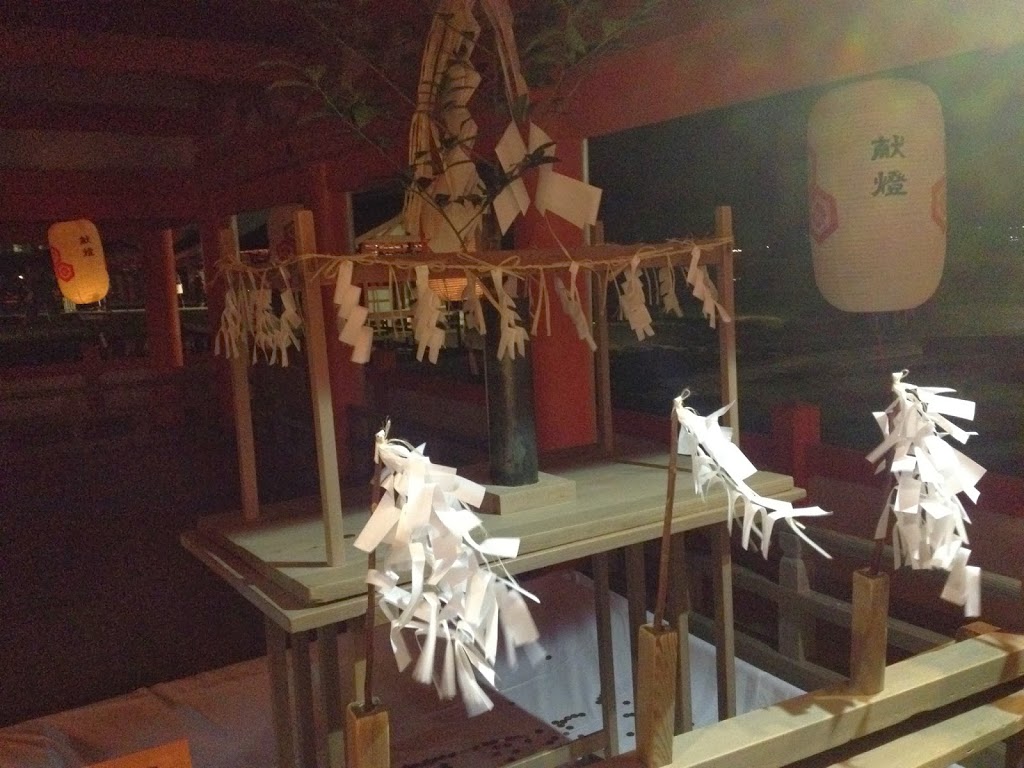 The Shrine at Miyajima, called Itsukushima, though one of several great Shrines dedicated to Amaterasu Omikami, also houses many devotional spots pertaining to other favorites from among the Shinto gods.

That we might pass in peace, we each tossed five-yen coins, and bowed and clapped our way across the immense shrine, being sure to pay our respects at each devotional station. 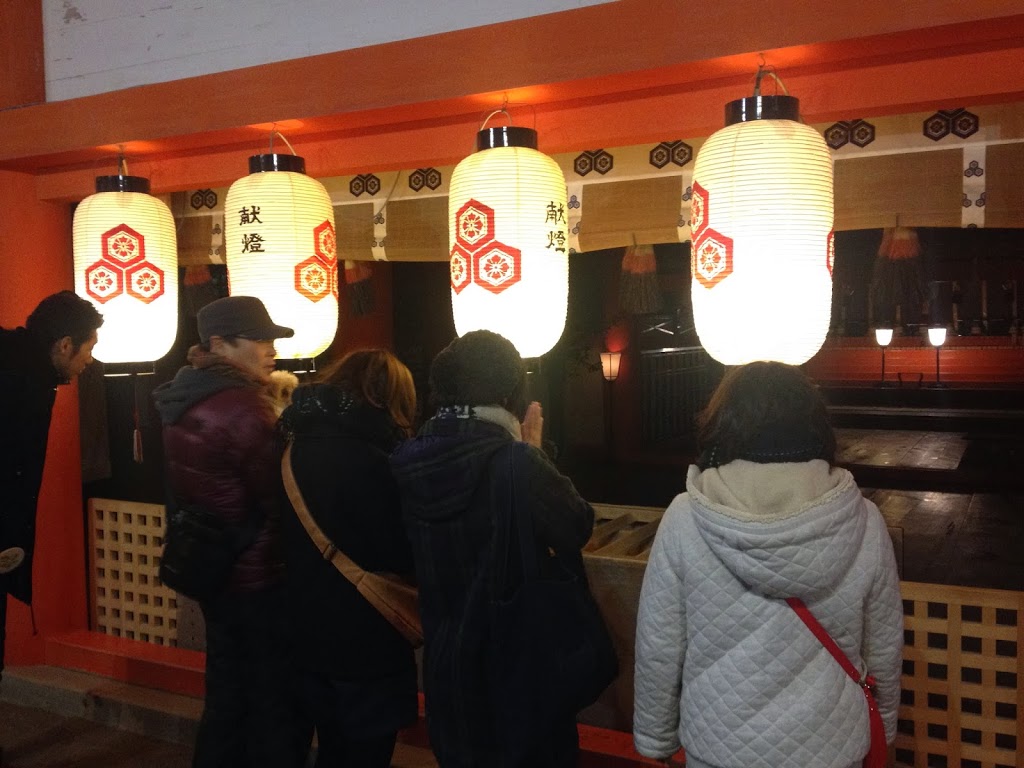 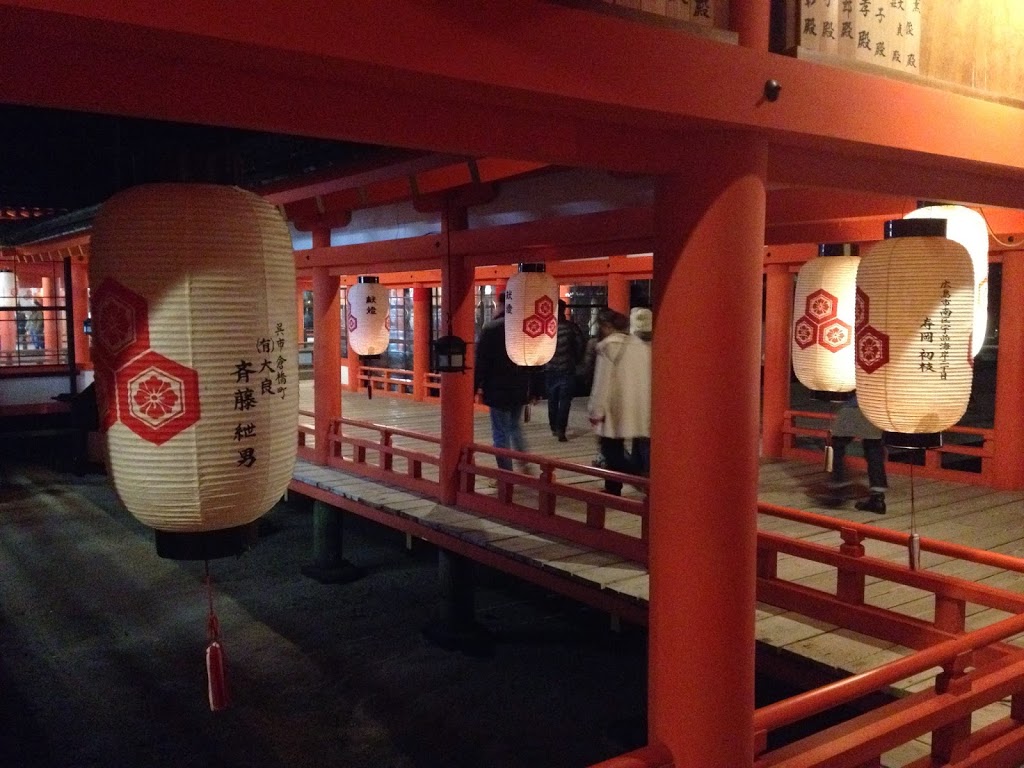 Along the way, I even found a pair of acolytes relighting a lantern that had gone out!

Deep within the heart of the shrine, Shinto priests were conducting a special ceremony for the coming New Year. 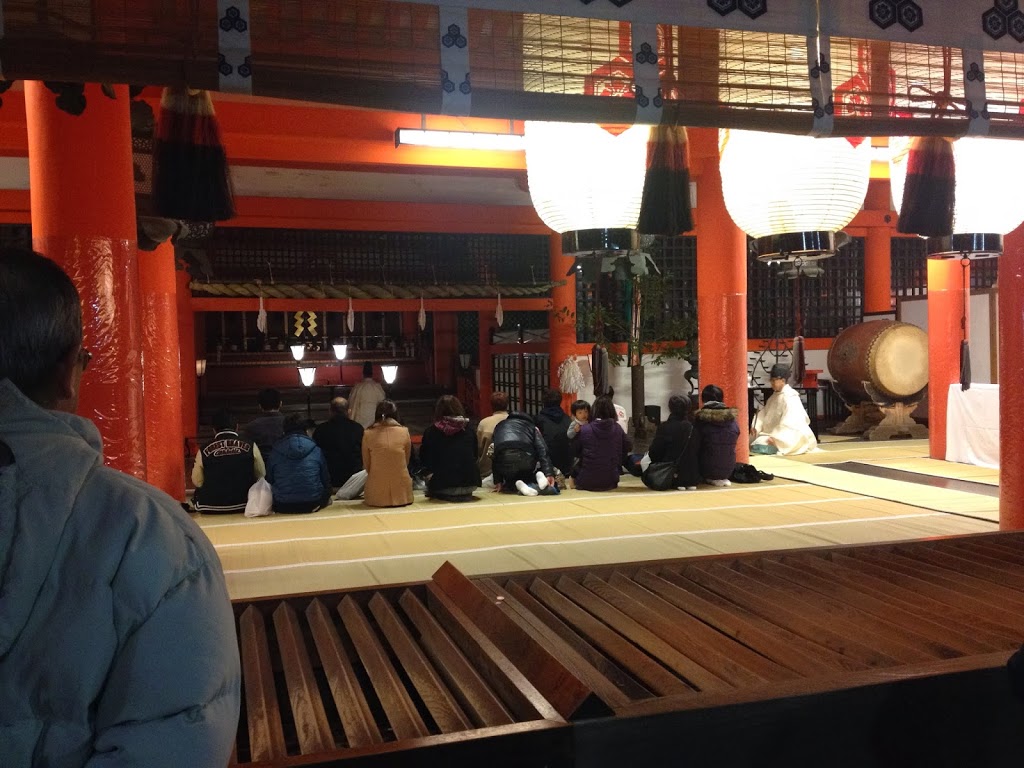 In the center of the Shrine stands an open deck from which one can view, photograph (of course), and otherwise contemplate the enormous Torii gate rising out of the bay. We too paused again to admire its stunning beauty. 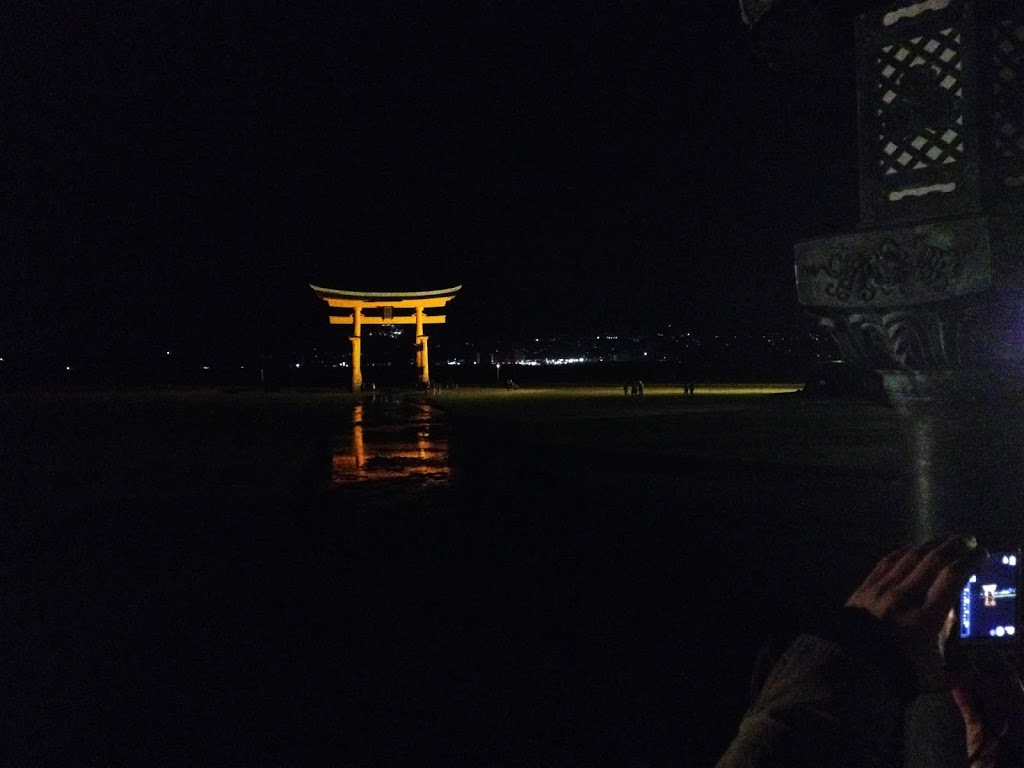 Further evincing Japan’s general lack of theft, massive quantities of sake and soy sauce, no doubt awaiting further New Year’s festivities, sat completely unguarded along the promenade. Right by the exit, too, I might add.

To Hisachan, this was, of course, “normal.”

To me, it might as well have been a giant banner stretched across the wall declaring, “YOU ARE NOT IN AMERICA.” 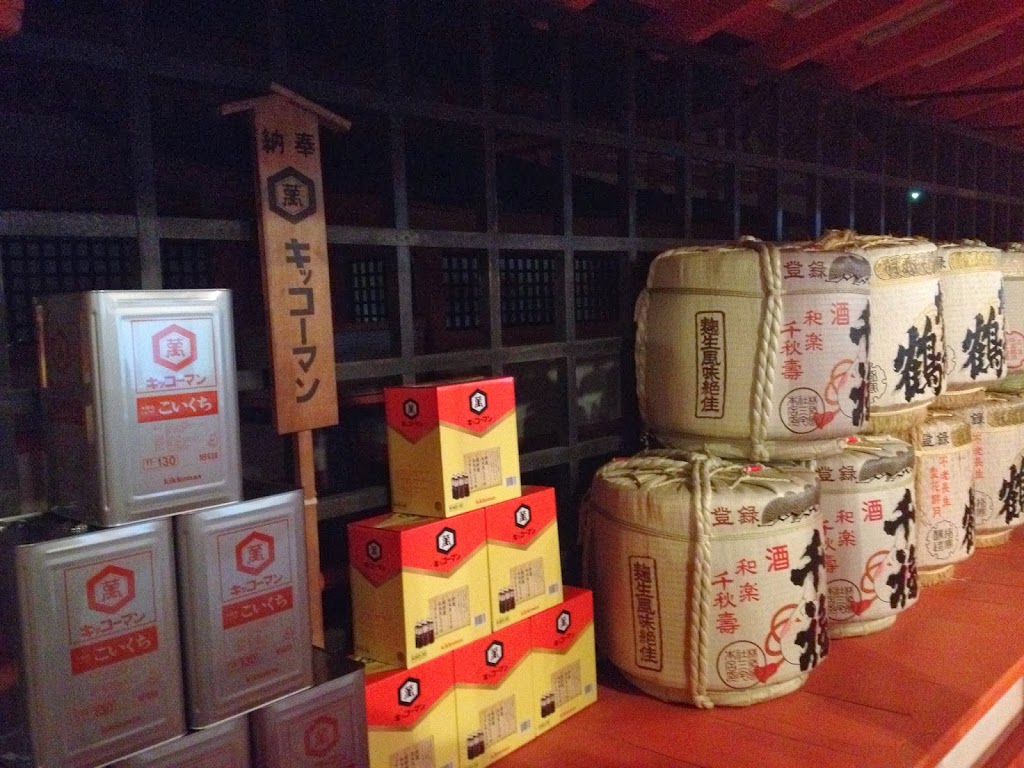 We purchased some special talismans from a concession of priestesses, and soon exited out the other end of the Shrine, disgorged with countless others as we all wound our way up Mt. Misen to greet the dawn. 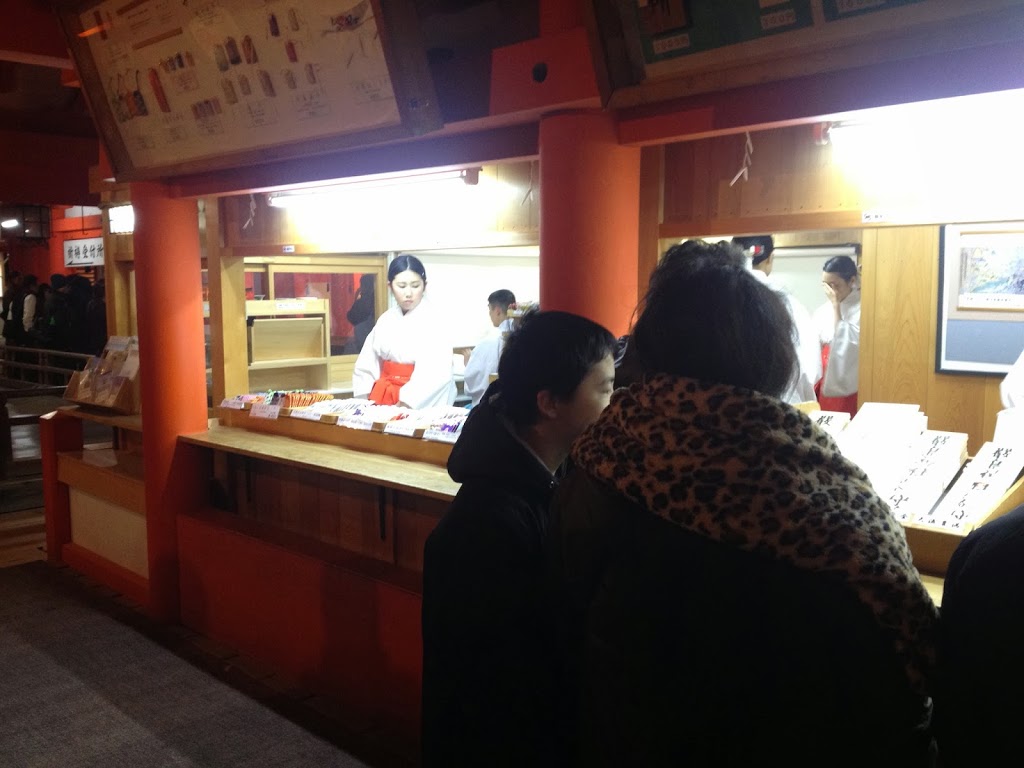 The Shrine exits into a beautiful grounds, next to which stands a sizable Buddhist Temple.

We stood for a moment to take in the beautiful nighttime scene, as all around us gorgeous ancient structures glowed against the darkness. 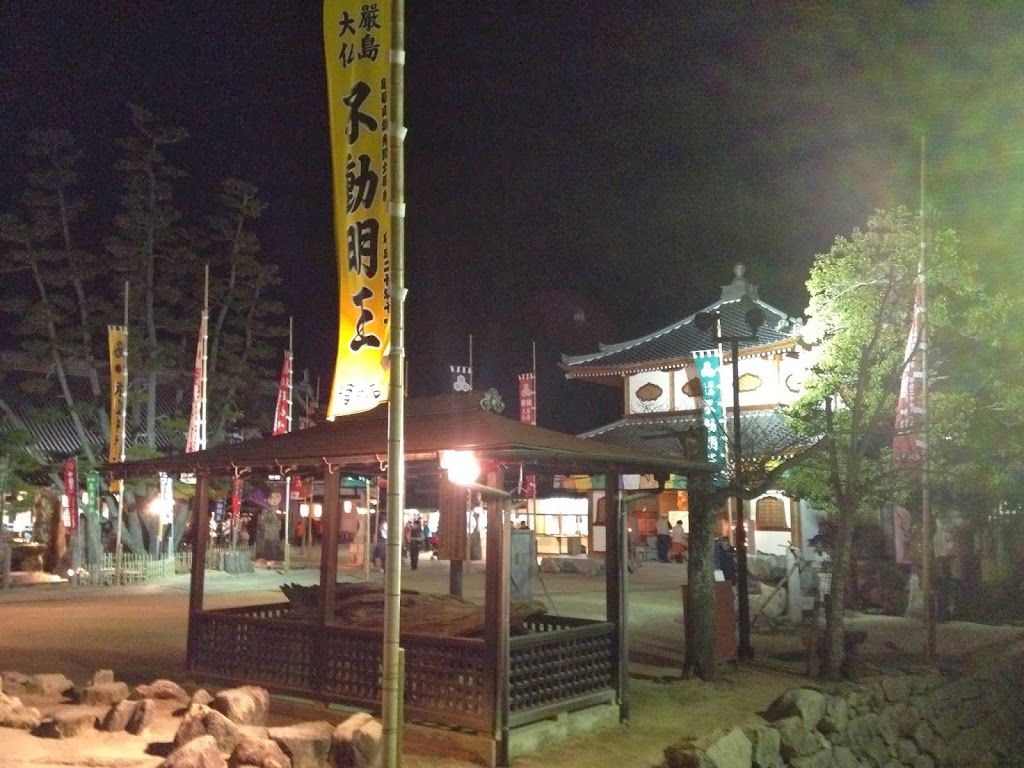