*** Mt Misen, Part II ***
Leaving the shining shrine of Miyajima behind us, we marched on into the night.

Leaving the shining shrine of Miyajima behind us, we marched on into the night. With only a couple hours until dawn, the five of us, Piro-Chyan, Miki-Chyan, Asa-Chyan, Hisa-Chyan (a.k.a. The Princess), and myself, needed to attain the summit of Mt. Misen in time to witness the first sunrise of the New Year.

As we slipped silently passed houses in the stillness of night, I noticed one with a Christmas tree outside. Encountering such a decontextualized Western relic while marching up a sacred Shinto mountain to observe a pagan New Year’s ritual was deeply amusing. 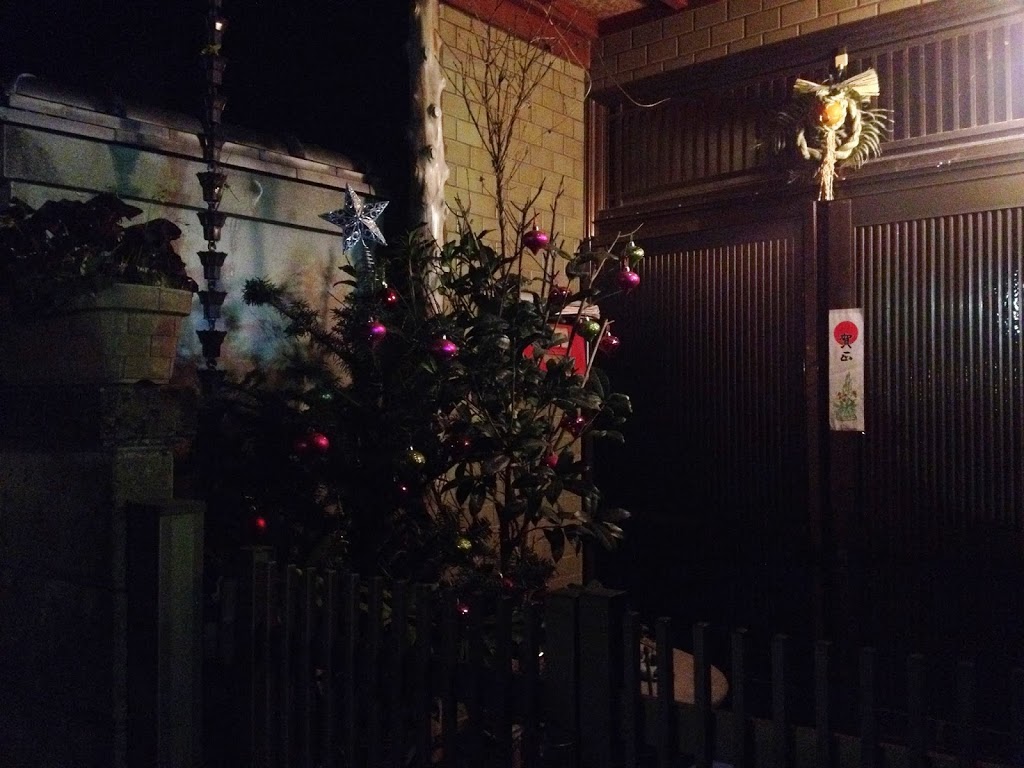 Most people in Japan participate in Shinto AND Buddhist practices, and attend both Shrines AND Temples as occasion demands. In addition, most folks also celebrate Christmas. So, you may be asking yourself, what exactly DO the Japanese believe in?

The quick answer: Everything, and nothing.

According to Shinto, the ancient folk religion of Japan, everything has a spirit, including animate creatures, inanimate objects, and even concepts and ideas. These are called “Kami,” and to the Japanese, other gods and spirits from other parts of the world are basically just more Kami. In fact, there is even a word to describe the indiscriminate spiritual anarchy unique to the Japanese, “Shinbutsu Shuugoo,” or “Gathering of the Gods.”

But here’s the clincher—at the same time, the majority of Japanese people consider themselves “non-religions.”

So there you have it… Everything, and nothing. 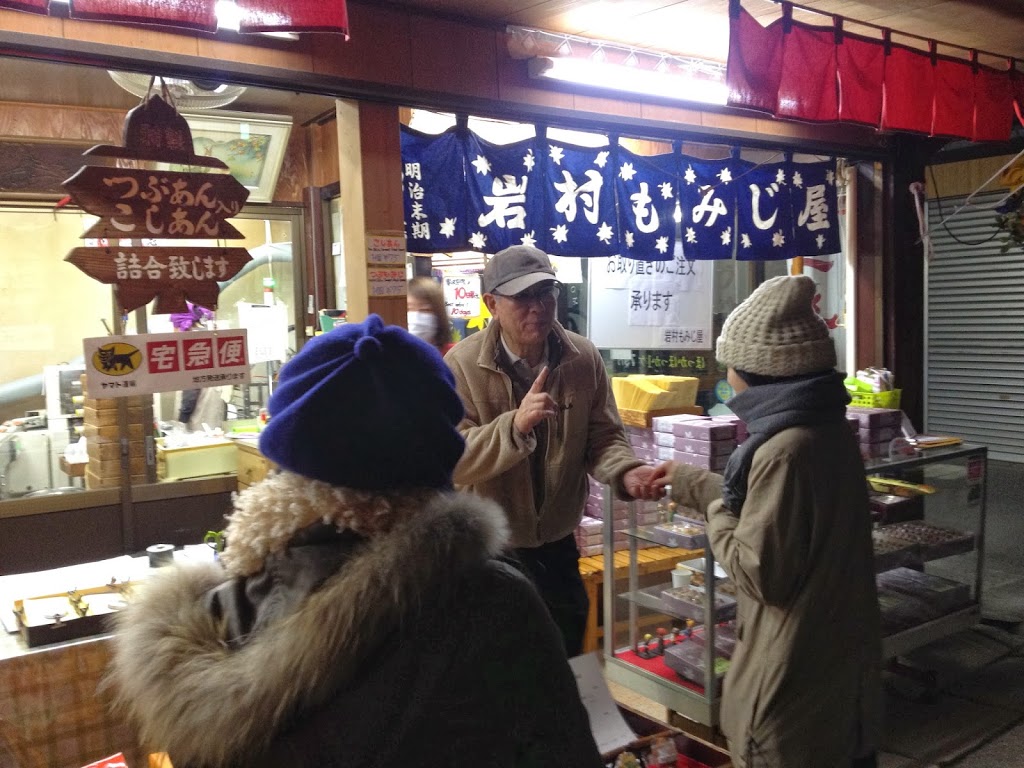 A little down the lane, we encountered a stand selling “momijimanjuu,” or small, delectable, maple-leaf shaped cakes commemorating the maple trees which grow across Miyajima. 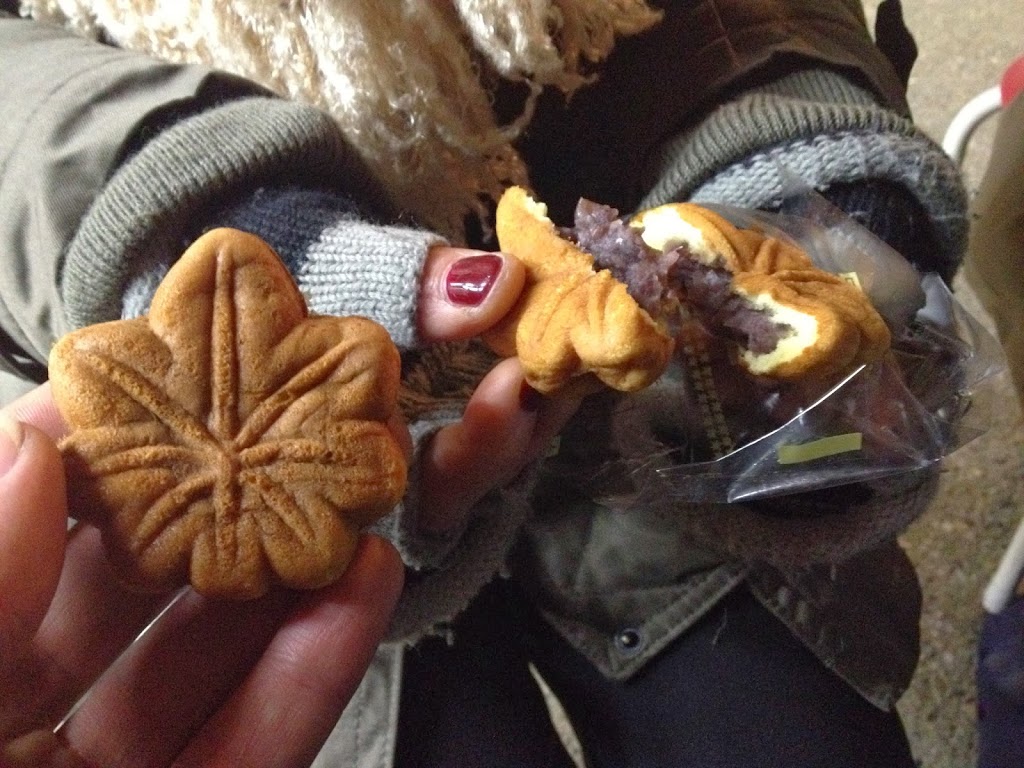 These little morsels are variously filled with sweet red bean paste, custard, cheese, chocolate, macha, yams, chestnuts, etc. Ours were filled with sweet black beans, made to order!
In addition to momijimanjuu, a handy-dandy tea dispensing station stood at the ready. 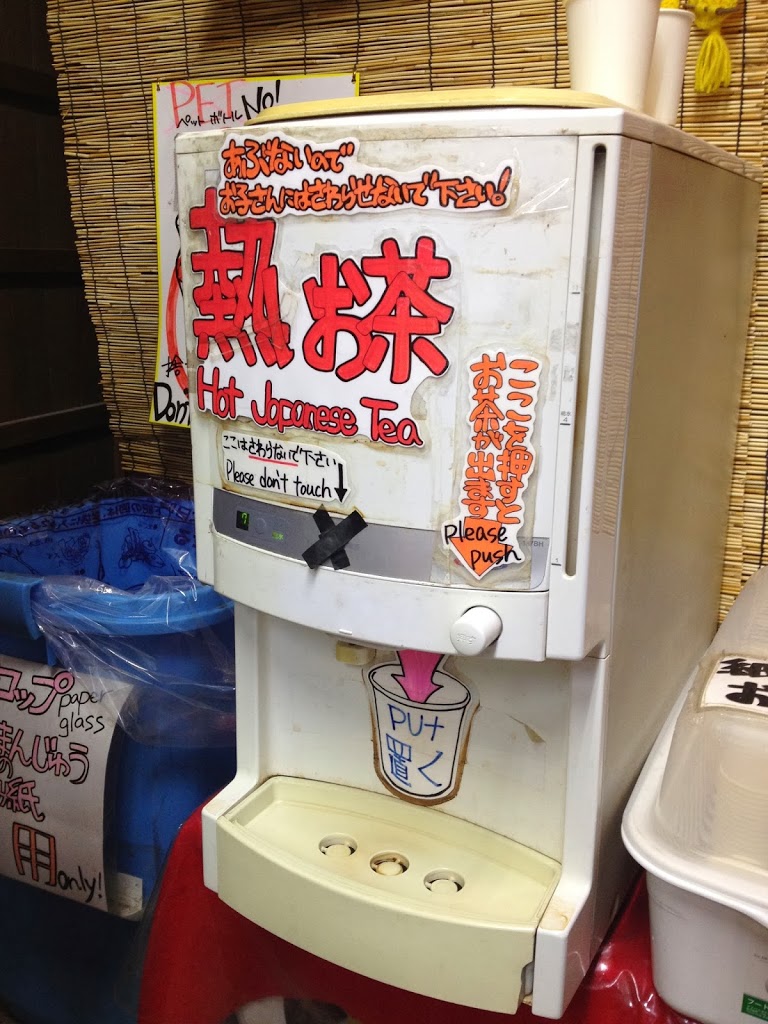 As the night reached its deepest hour, the temperature dropped drastically.
The hot tea and cakes steeled us against the cold, as we gathered around something resembling an enormous black vase, in which burned a bright-hot heating filament, and over which we eagerly placed our frozen hands. 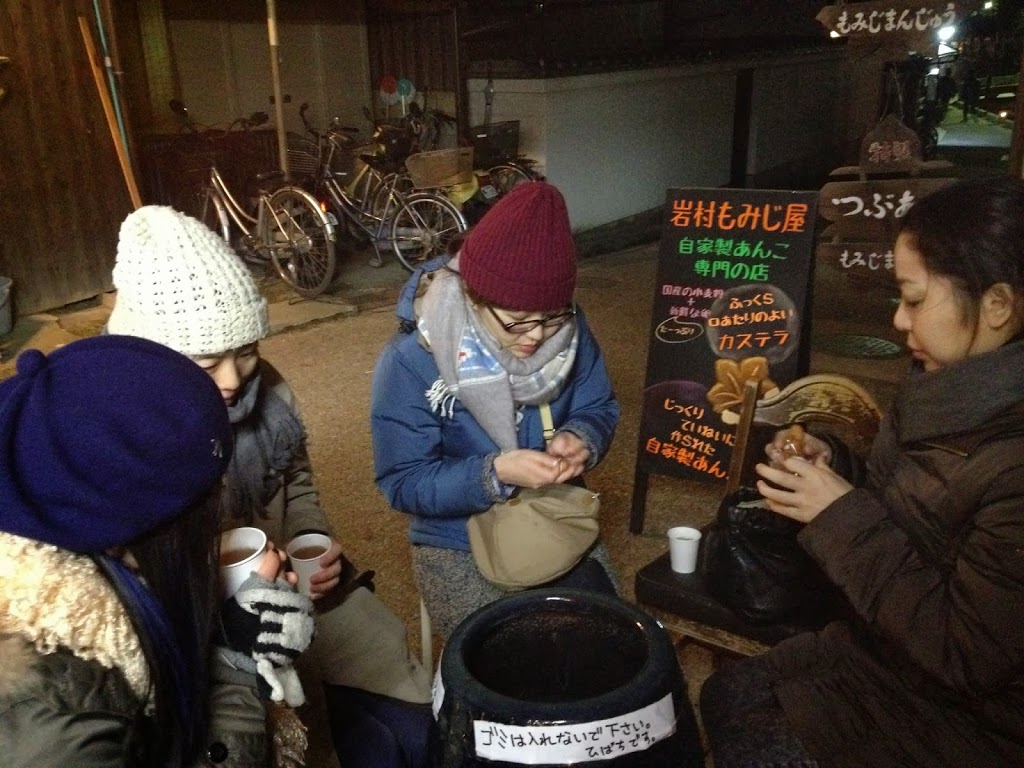 In Japan, little oases like these always seem to appear just when you need them. 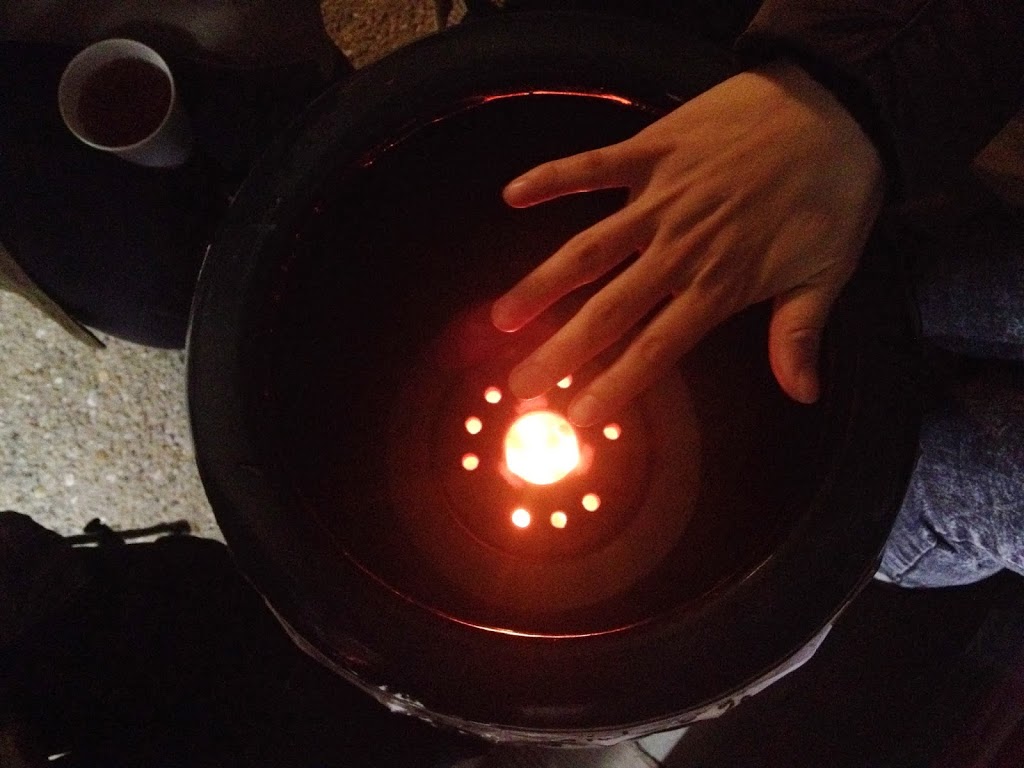 Pressing on from our beloved heater-vase, we wandered over a long rough path punctuated with half-sunken rocks, curious slopes, rough-hewn stone steps, thick shadows, and essentially every other species of instability imaginable—a fine line between quaintly rustic and downright precarious.

We walked along together, other groups of friends, families, and sweethearts before and behind us—a silent convoy ascending in the night. 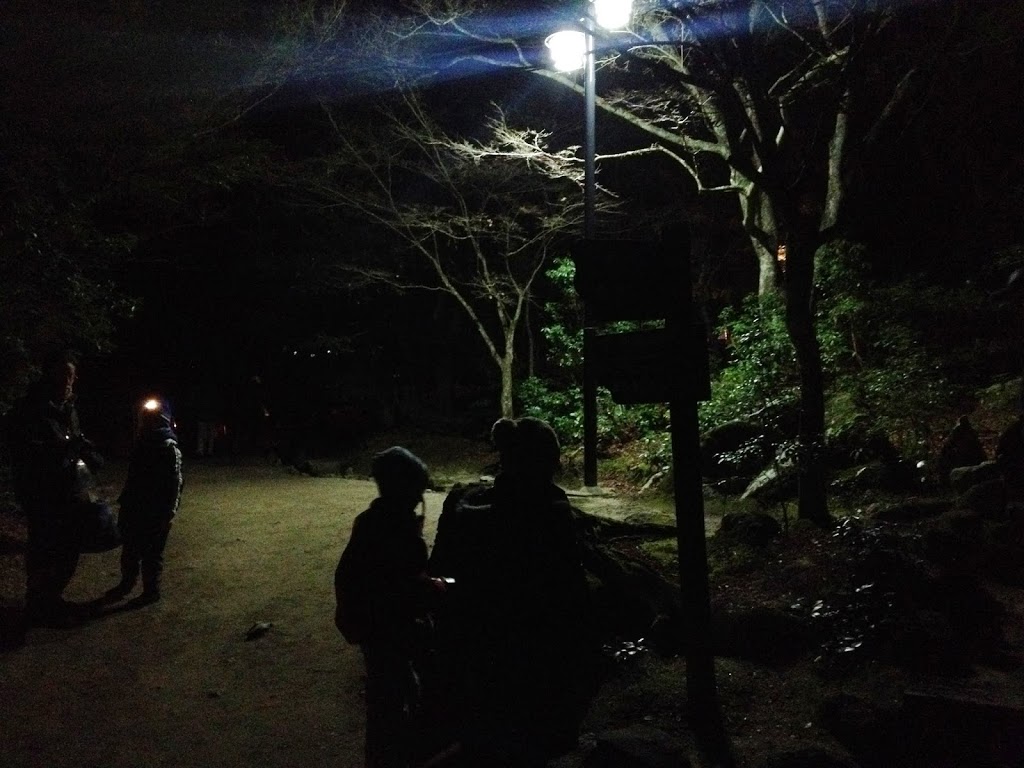 After about a mile of this, we arrived at a fork in the road. On one side, the path continued up the mountain, while on the other stood a long flight of rough-hewn stone steps leading up to the “Ropeway,” that being a gondola standing by for those disinclined to make the entire journey up Mt. Misen on foot.

As much as I would have enjoyed a nighttime hike to the peak, as a group we were bound for the Ropeway, and thus joined the line which stretched along the steps leading thereto.

As we stood on the stone steps awaiting the Ropeway, The Princess and I couldn’t help but notice a large number of ladies in heels waiting in line with us—ladies who, in stiletto heels, had navigated the same, lengthy, uneven, badly-lit, rock-strewn, steeply sloping mountain path up which we had just carefully tread our own selves.

It was around this time that The Princess and I developed the phrase “ashi-ni-bushido,” or “samurai-spirit-in-the-foot,” as the only plausible explanation for this Japanese fashion phenomenon. 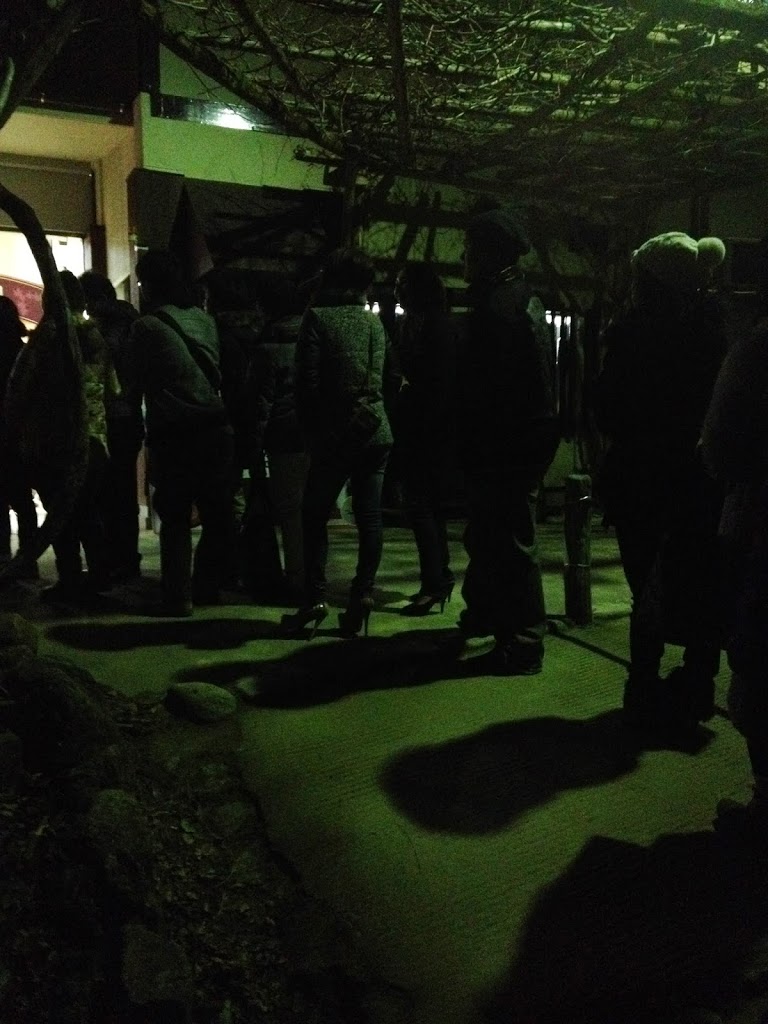 Soon we found ourselves within the Ropeway building, wherein numerous maps and other useful visitor information abounded. The mountain itself stands strewn with beautiful historical places. 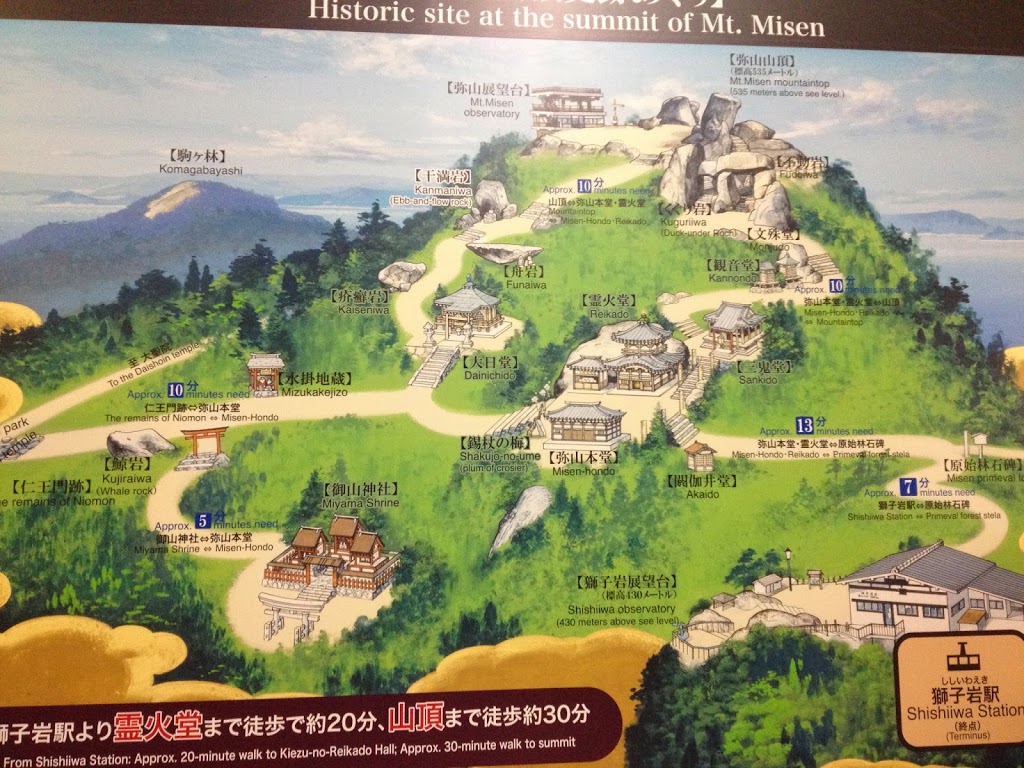 They even had an English version for honkies like me! Notice the warning in the lower right corner declaring that my tickets and souvenirs might be devoured by wild deer.
The Ropeway actually consists of two gondolas combined, as depicted below. 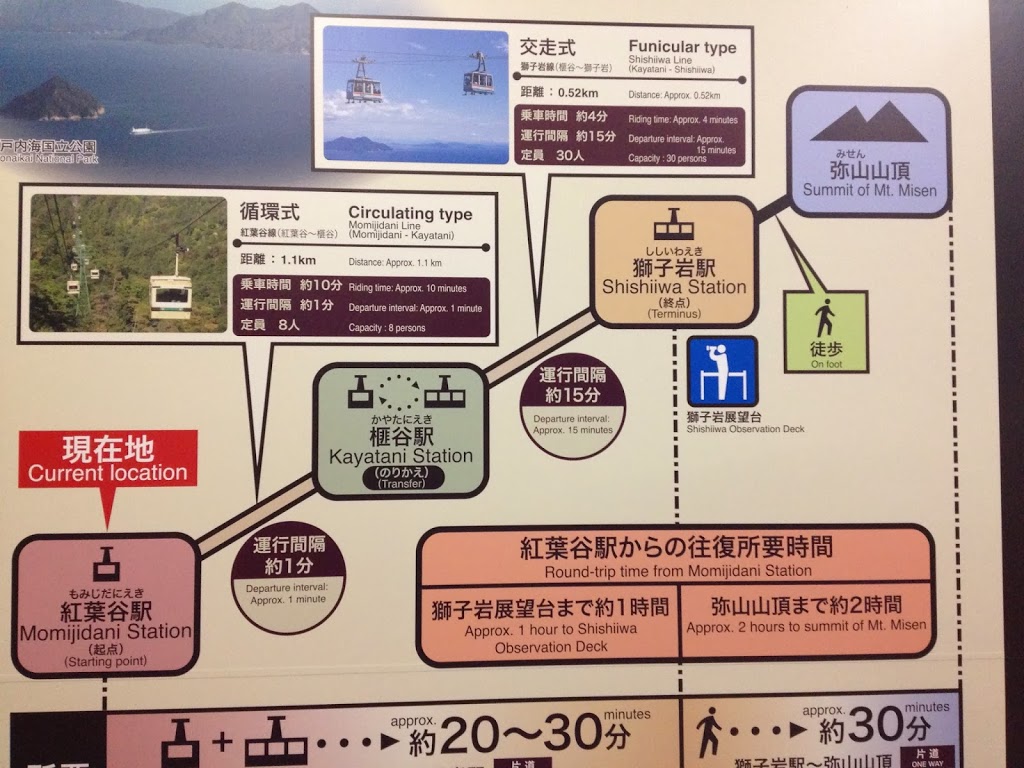 Curiously enough, to ease the trepidation of gondola passengers, there was a display case mounted on the wall depicting the various cable thicknesses utilized by the Ropeway.
For me at least, I’m not generally nervous about such things until someone tries to convince me that I shouldn’t be. This is definitely a product of Western thinking. To The Princess, this display was very reassuring.
In any case, we continued past the highly suspicious “This is Perfectly Safe” display, ready to entrust our lives to the Ropeway. 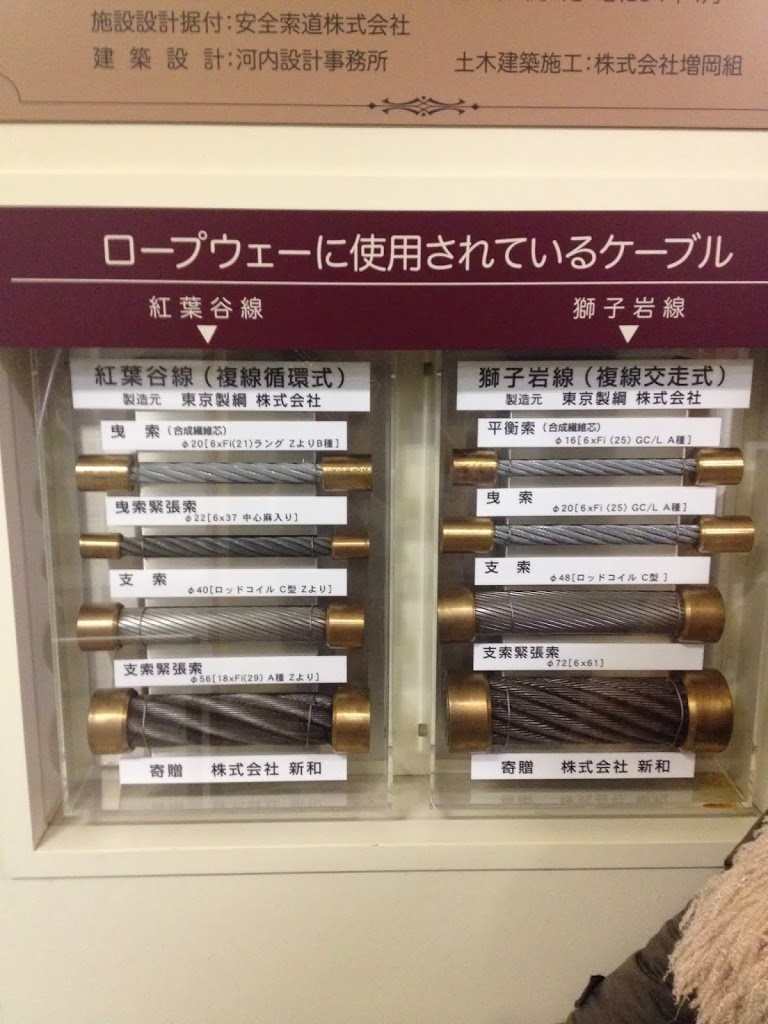 The first Ropeway gondolas we rode in looked like disembodied pickup truck cabs, their interiors lined with benches on both sides, capable of seating about six Japanese-sized people (i.e. probably like four Americans). 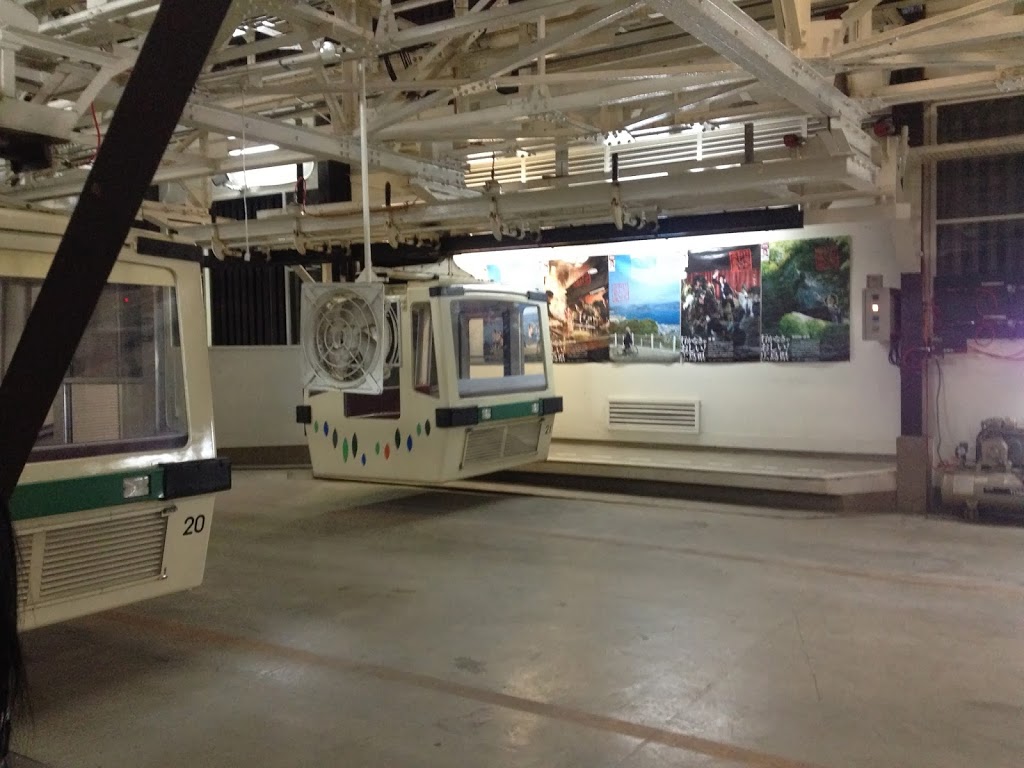 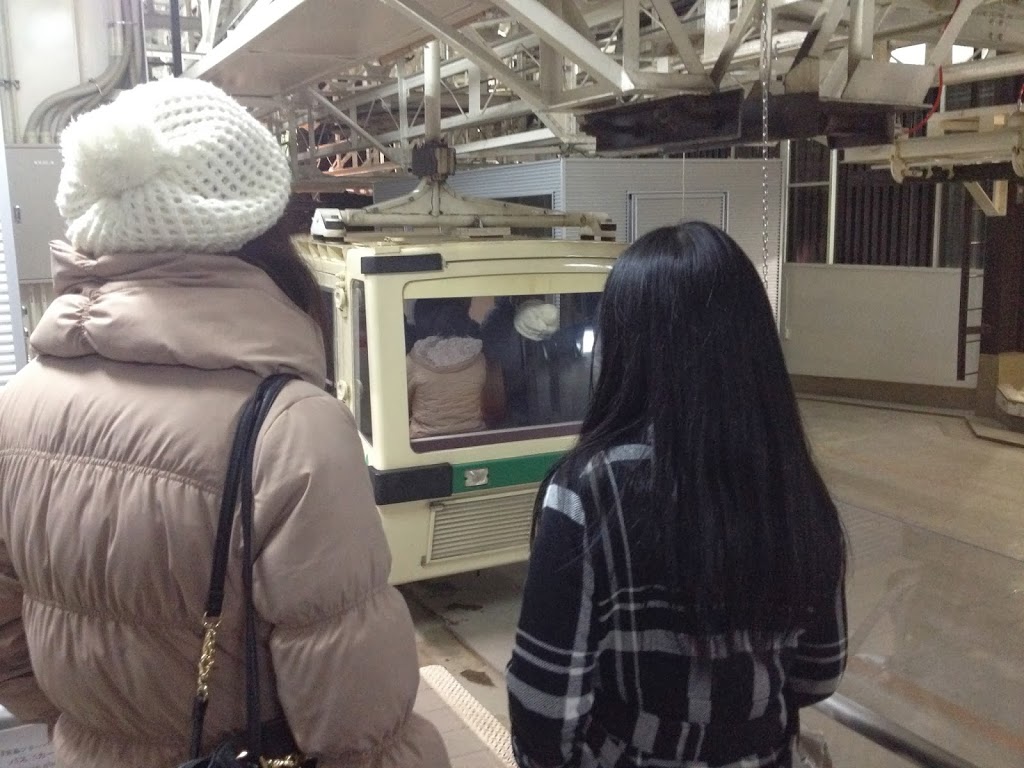 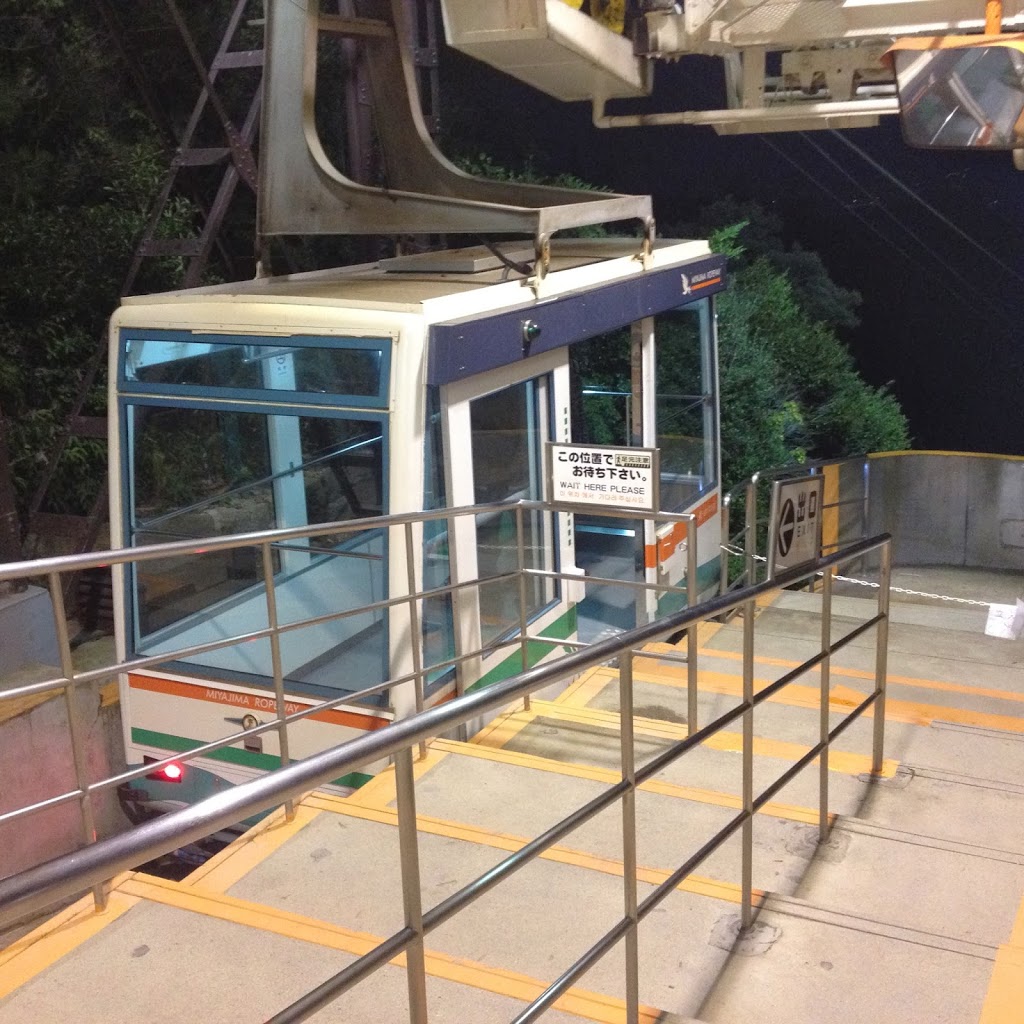 Passing up the mountain on the Ropeway in the shroud of night was exhilarating.
The gondolas, with their pickup truck headlights shining, and spotlights from the boarding stations blazing both ahead and behind, we floated over the forest as if swept up in a river of light. The treetops glowed green beneath us, even as their bases fell into a fathomless sea of darkness below.
Unable to predict our relative height, we passed sometimes near to the trees, sometimes far above them, yet always with the ground itself lost in shadow. All the while, our ears kept popping, reassuring us that we were indeed ascending, and from what I could tell, very rapidly. 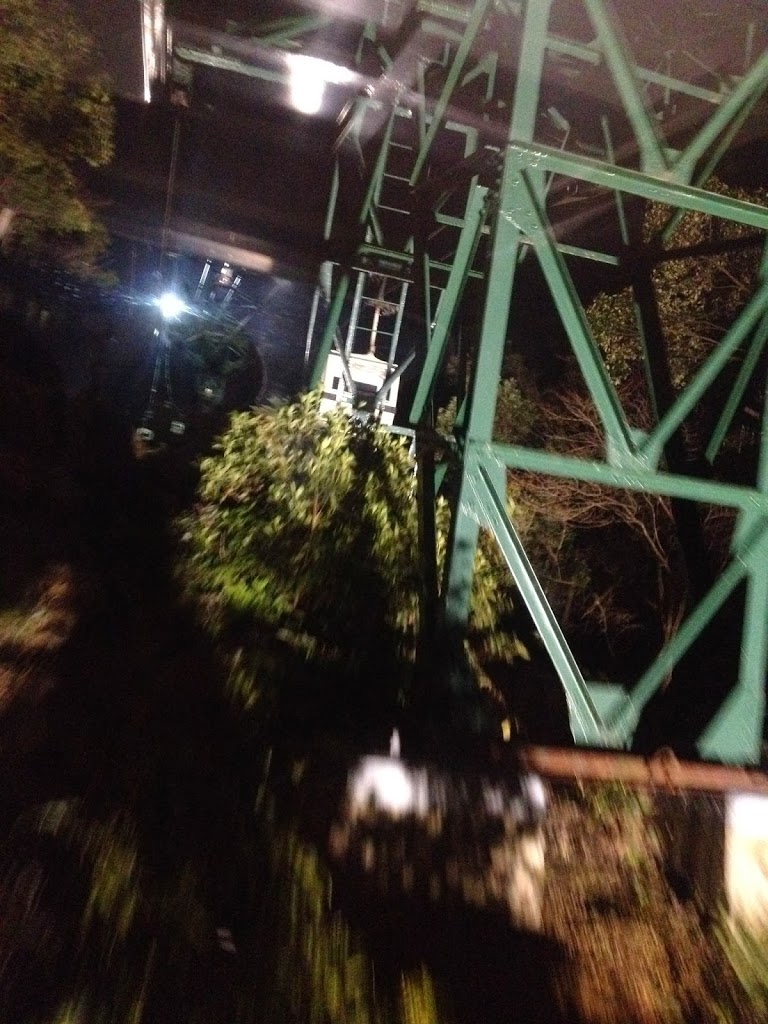 At last our gondola arrived, and we surmounted a flight of steps which brought us to the uppermost Ropeway station, inside which many others were already gathering. We rounded a corner, and exited the station onto the peak of Mt. Misen, towering 1,755 feet (535 meters) above the sea.
Upon the distant horizon, we found a sky already beginning to glow with the promises of dawn.
Together and full of excitement, we half walked, half ran toward the uppermost point of the summit—for within the hour, we would be greeted by the Shinto Goddess of the Sun, Amaterasu Omikami herself, making her first shining ascent into the heavens of the new year. 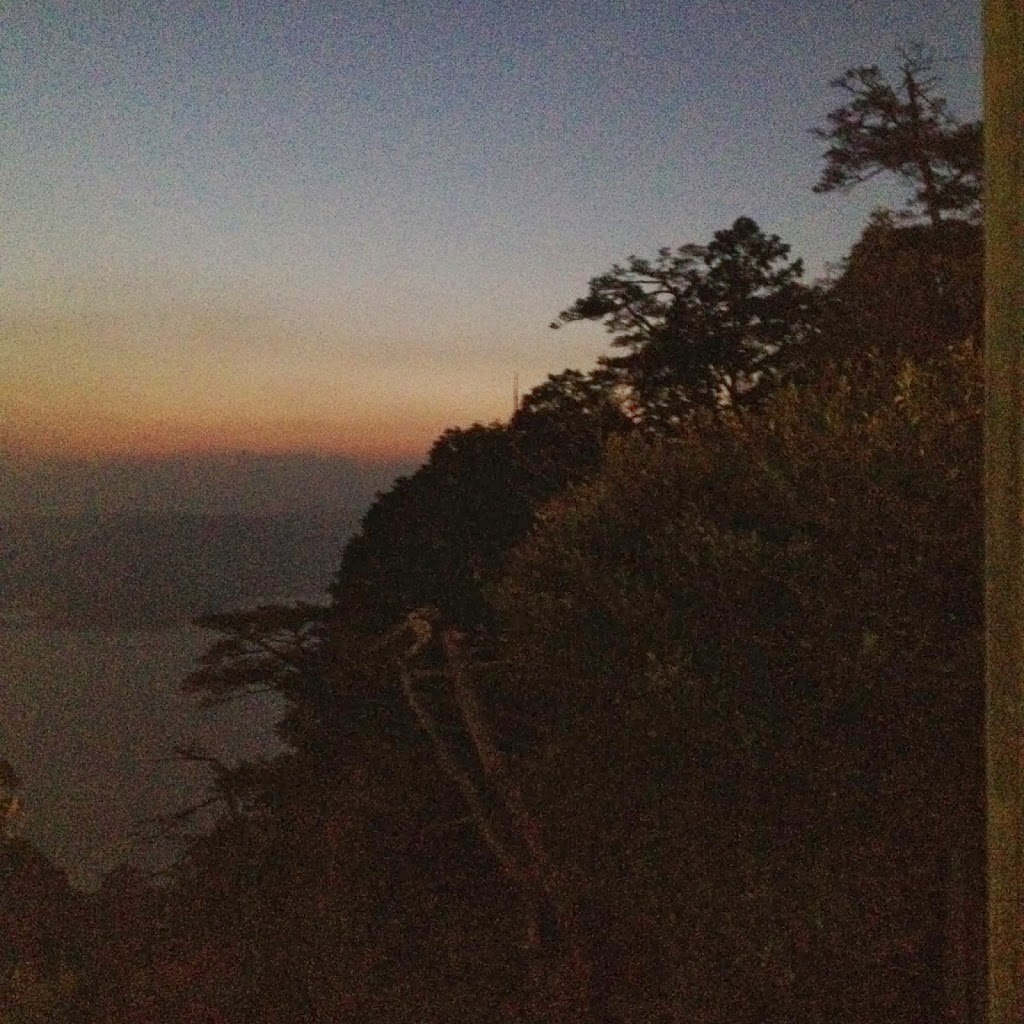 0 comments on “A River of Light” Add yours →