Though barely able to contain two slices of English muffin, in Japan this toaster oven apparently qualifies as “jumbo.”

Though barely able to contain two slices of English muffin, in Japan this toaster oven apparently qualifies as “jumbo.”

After breakfast, we grabbed our umbrellas, and headed to the shrine near Hisachan’s place—the very same which we had visited on New Year’s Eve. 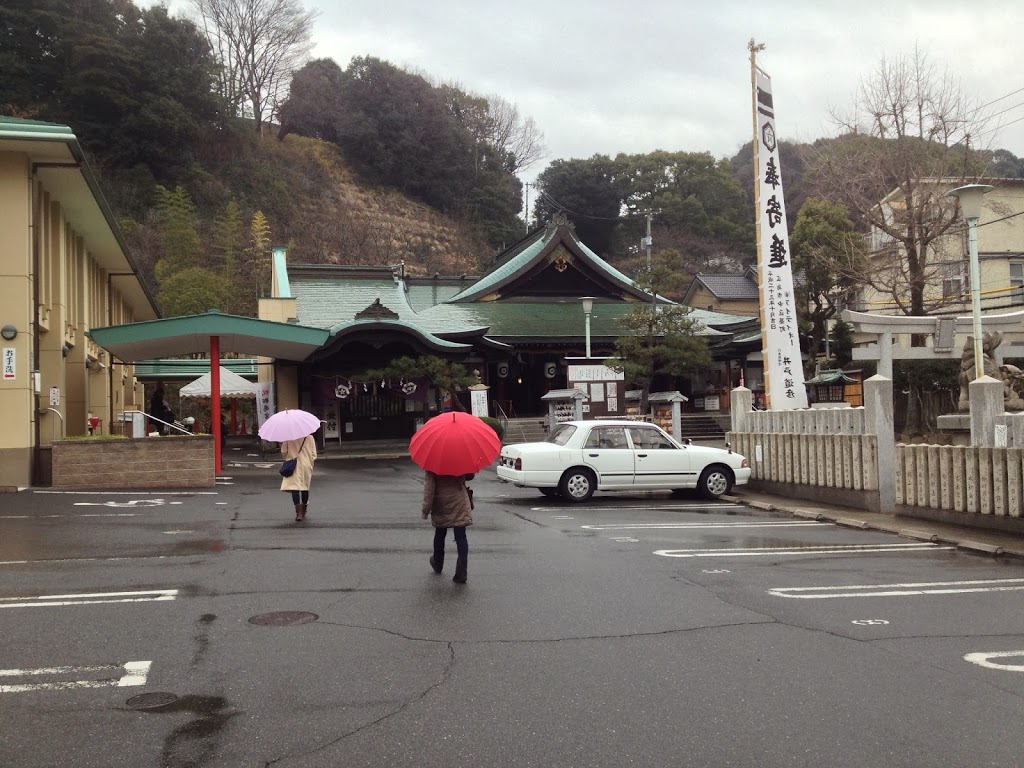 Inside they showed us list of bad luck ages and years.

Thirty-Two is supposedly the biggest “bad luck year,” so much so in fact, that the years before and after your bad luck year are often considered to be pretty nasty too. We had come to the shrine in hopes of mitigating this misfortune spillover now that Hisachan had turned thirty-three. 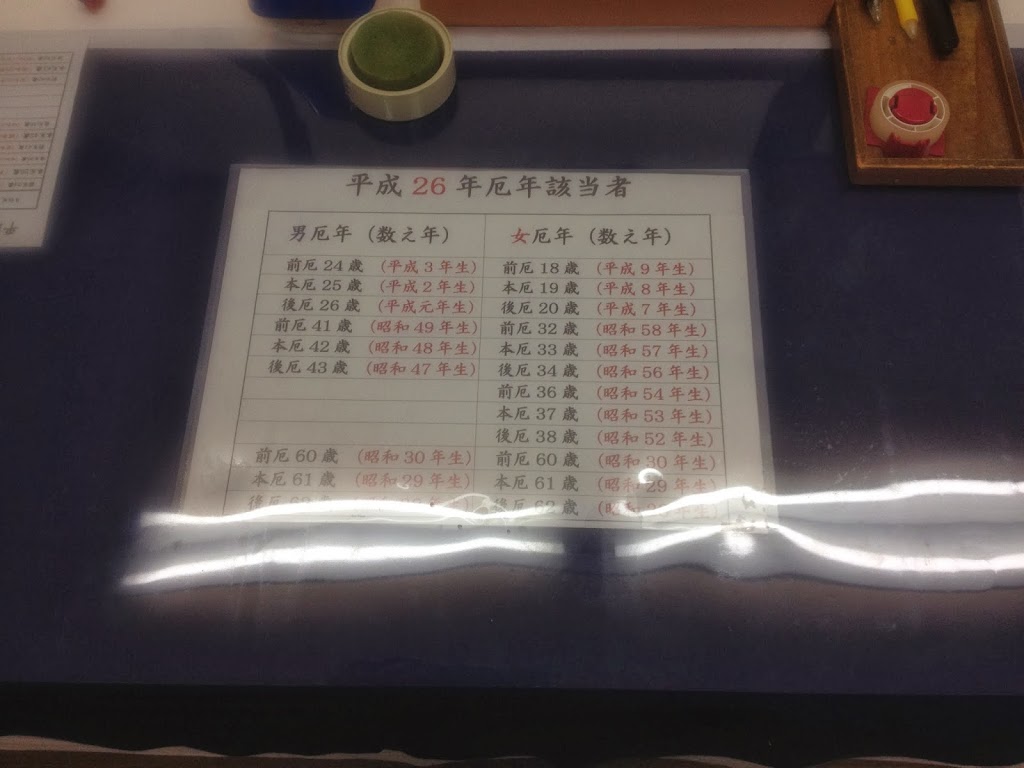 Here we see Hisachan providing the necessary information for the Shinto Priest to conduct the sacred rite. 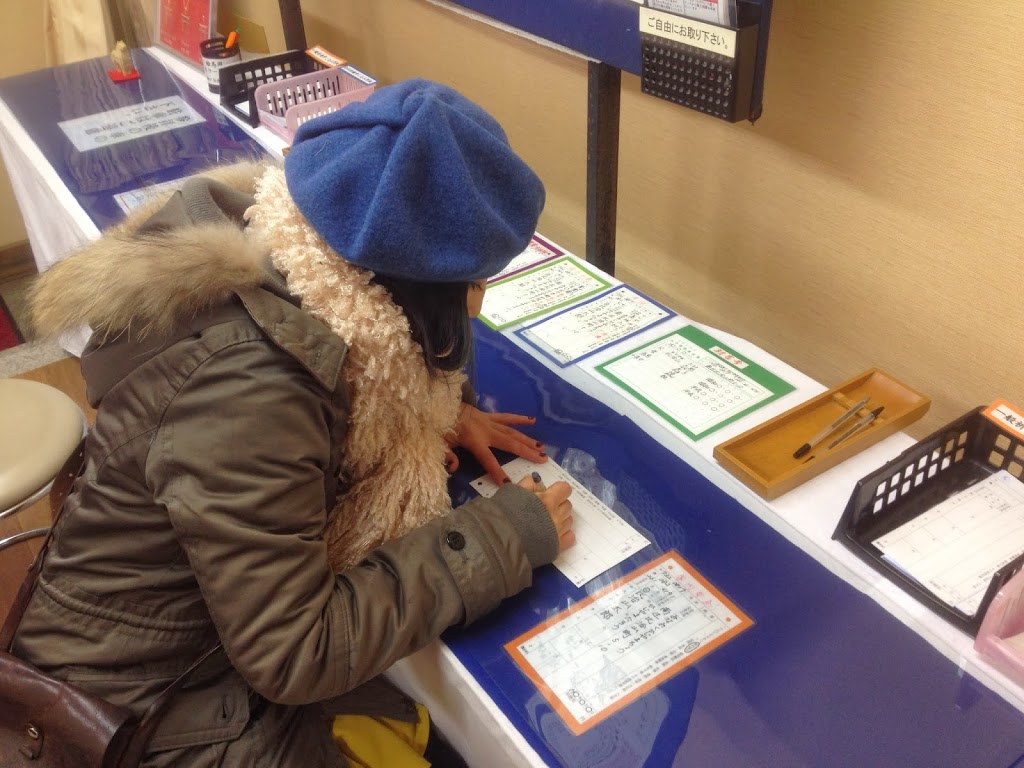 There were some pretty interesting charms available inside, including this miniature handmade cart full of tiny rice barrels.

Hisachan had to provide katakana transliterations of all the English words.

Little did we know, this would spell the first bout of misfortune scheduled to befall the poor Princess this year.

We seated ourselves upon a bench inside the Shrine’s reception area overlooking a classically styled Japanese garden, and there awaited the commencement of the ceremony.

Once summoned inside, we took our places upon the benches before the dais. Rich silk hangings, beautiful ornate lanterns, and great swaths of Shinto confetti adorned the stage.

Hisachan took a seat in the front row, while Naoko-san and I positioned ourselves upon the bench behind her.

I of course felt it poor etiquette to photograph the procession which followed, but I did manage to snap one shot prior to the commencement of the ceremony. 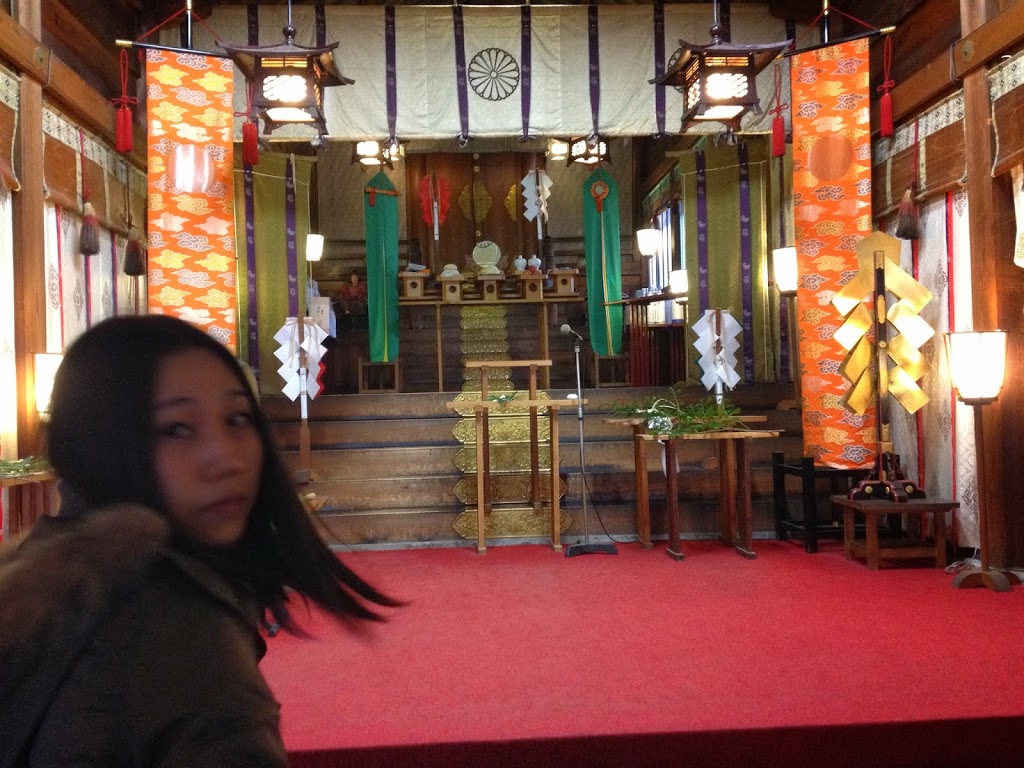 What next transpired strained the mind a bit.

Hisachan and another young lady were both to receive the blessings of the gods. A Priest appeared, dressed in traditional robes, and wearing a funny hat.

As an historical rule (both in Japan and elsewhere), the weirder the hat, the greater the importance of the dignitary found beneath it. I’ve yet to fully understand why this is so.

In any case, the priest proceeded to speak in archaic Japanese which, I later learned from the Princess, I was not alone in completely failing to understand. He repeatedly pulled out and tucked away a strip of wood from his sash, the surface of which was apparently printed with some sacred inscription or other. He also occasionally shook about and waived around some Shinto-Confetti-on-a-Stick as the ceremony required.

He called the other young lady and Hisachan to the stage one after another two or three times during the proceedings, but the the real highlight came when he produced the forms which the supplicants had filled out prior to the ceremony.

Apparently the gods need a physical address to properly confer blessings. It is perfectly understandable how this might otherwise prove confusing for ancient spirits of monumental power and sagacity. The modern world is a heavily populated place, and we certainly wouldn’t want our blessings, miracles, and of course curses, getting mixed up along the way. So an address they need, and an address every Priest must apparently attempt to provide.

With the first of the supplicants, a fine young Japanese lady dwelling nearby in Hiroshima, this proved a simple matter. The worthy Shinto dignitary recited the name, age, and address of the lass with all the weight of religious solemnity.

However, when the priest moved on to Hisachan’s address, things became a bit more challenging.

By this time, Hisachan was already vibrating with suppressed laughter, and Naoko-san and I, sitting directly behind her, were no less struggling to keep ourselves similarly in check.

“Nai…” continued the priest, still no further along in his recitation than when he had begun.

We were beside ourselves.

The three of us nearly died. We couldn’t have found our own house by this instruction, so who knows how the hell the gods might hope to.

When the priest turned to waive his Shinto-Confetti-on-a-Stick over Hisachan’s head, all we could do was hold our breath to appear properly devout and pious.

Hisachan was at length called again to the dais, and somehow—through the grace of the Shinto gods—we all managed to keep it together long enough to survive the solemnities.

No sooner had we emerged from the Shrine than we burst into an uncontrollable fit of laughter which lasted more or less all the way back home. I, for one, am at a loss as to whether the levity of the procession is a sign of good luck or bad…

But I guess we won’t really know until around this time next year!

0 comments on “Addressing the Gods” Add yours →