It was the day after Hisachan’s birthday, and we had just emerged from our hilarious little episode in the local shrine. Hisachan and I decided to spend the rest of the day more or less just trucking around and enjoying Hiroshima.

(Signage outside a Hiroshima cafe.)

It was the day after Hisachan’s birthday, and we had just emerged from our hilarious little episode in the local shrine.

Hisachan and I decided to spend the rest of the day more or less just trucking around and enjoying Hiroshima. This would be our last full day in Japan, and we were already feeling that special melancholy unique to leaving-taking.

We headed toward downtown, and passed a giant chrome ballsack on our way to the yuubinkyoku, a.k.a. post office. 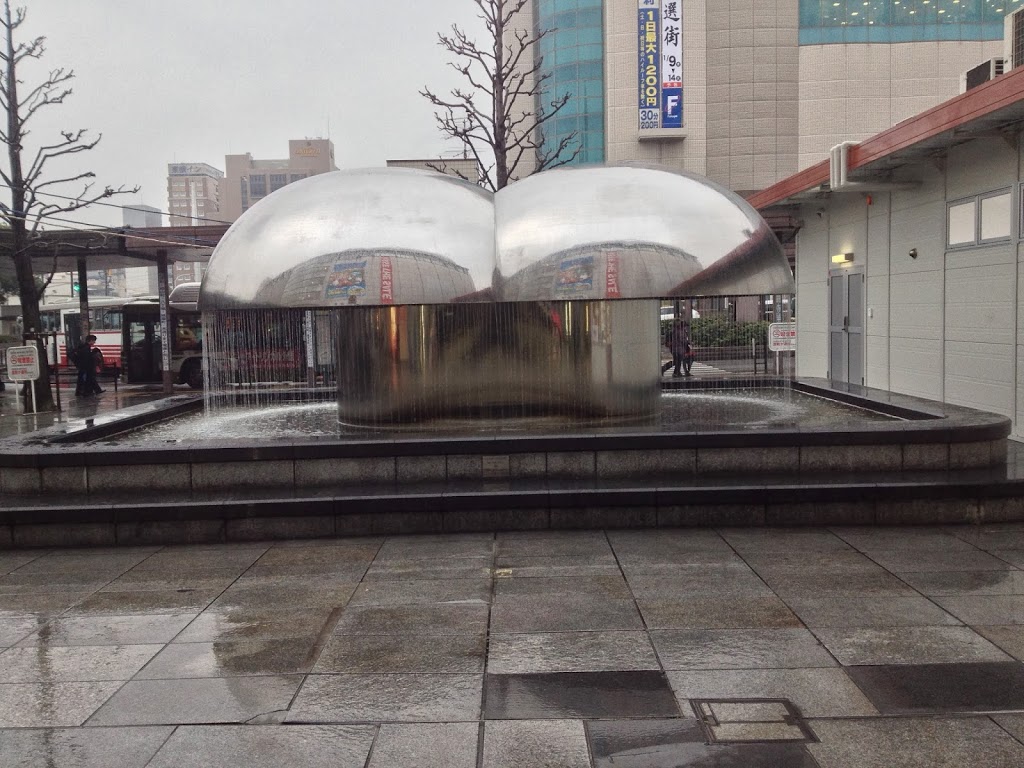 Here I mailed postcards to friends and family, while Hisachan sent some small gifts to Mikichan in thanks for our recent visit. 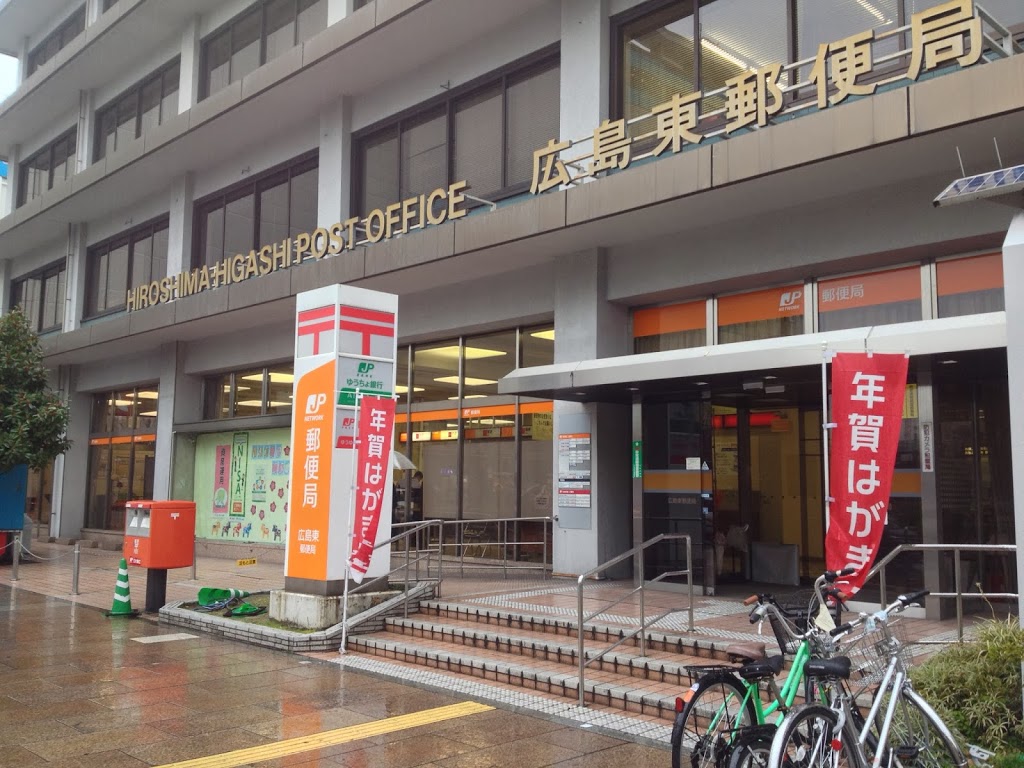 The post office lady was fast, helpful, and polite. She even assisted us by trimming the necessary post-office stamps and stickers with a pair of scissors so they would not obscure any portion of my messages. She did this cheerfully, quickly, and with precise straight cuts, as if wrapping a gift for the Emperor himself.

One of the most remarkable things about Japan is that no matter where you go, or what kind of establishment you find yourself in, the service is always of matchless quality. I Informed the awesome post-office lady that she was “sugoku jyozu,” or “very skillful,” to which compliment she humbly thanked me.

Compared to the U.S., the post office was faster, higher quality, and significantly cheaper. 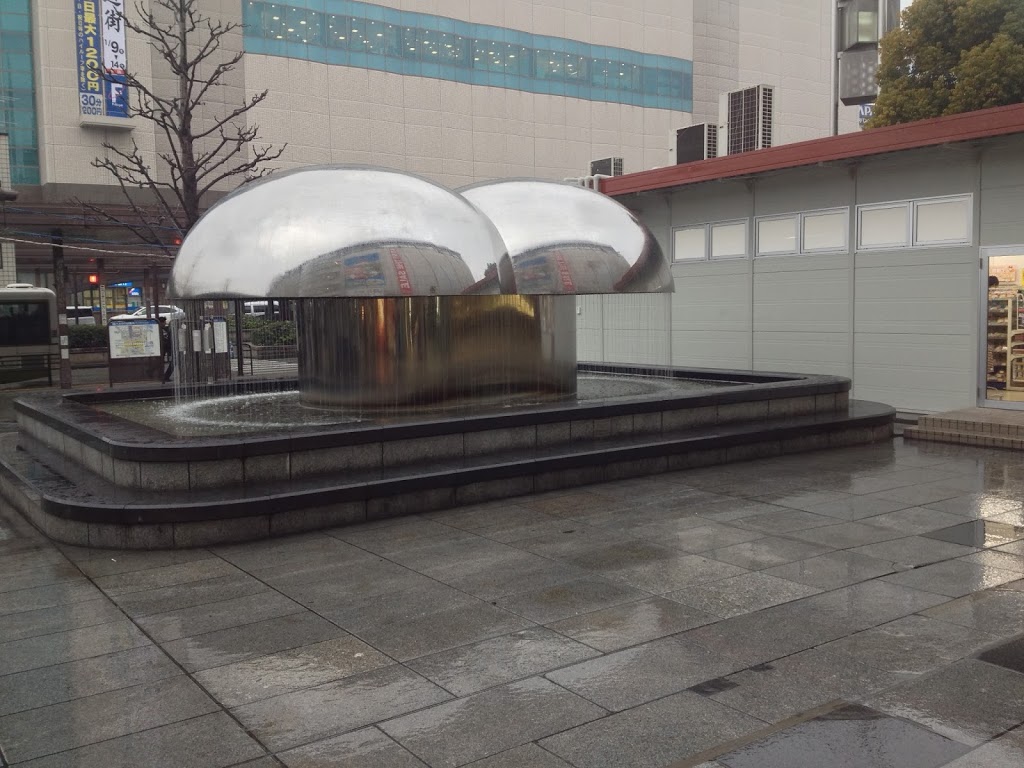 We passed back by the enormous shiny butt, and caught a streetcar at Hiroshima station.

As it was raining, row upon row of taxis, each equipped with lace seats and dapper uniformed drivers, stood at the ready. The taxis, like the post office, boast higher quality and lower price than our U.S. counterpart. 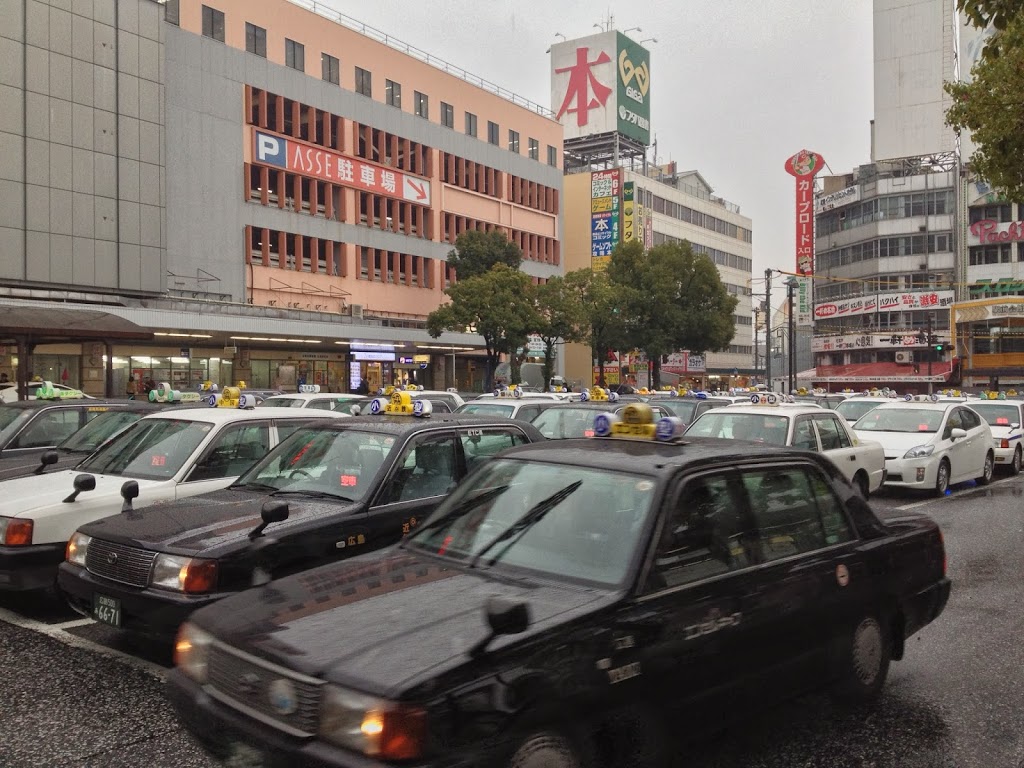 As with all public transpo in Japan, the Hiroshima streetcar is cheap, clean, and features constant service—and just like the yuubinkyoku and taxis—puts our Stateside counterpart to shame. 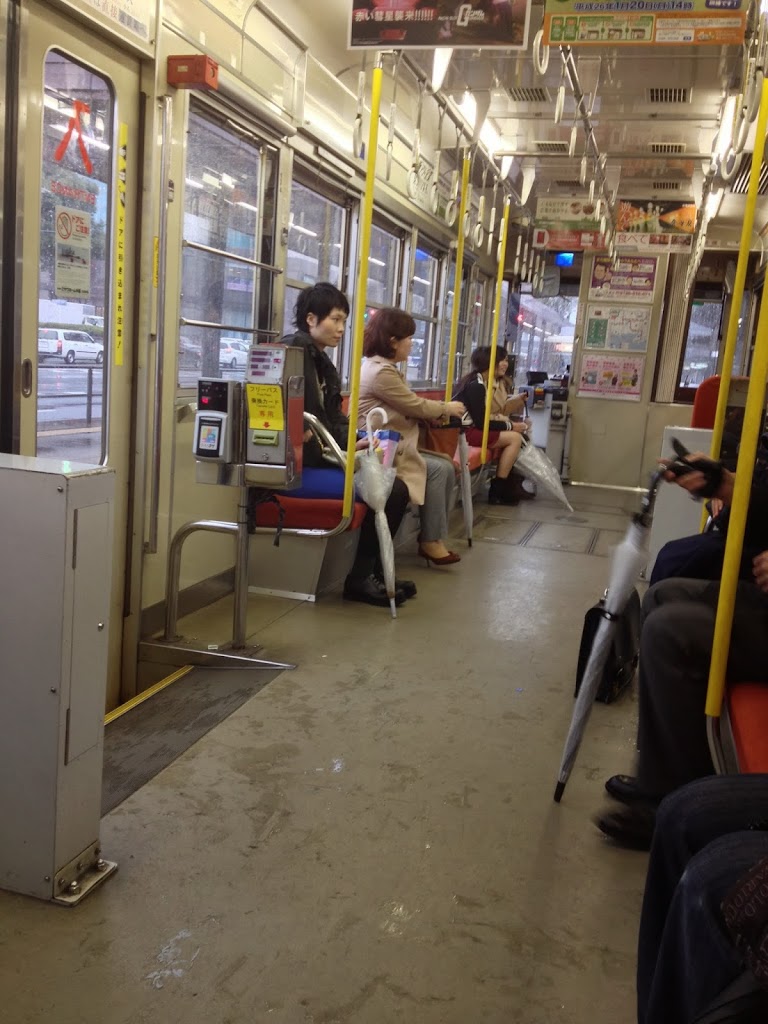 Encountered in Hiroshima City, this storefront was decidedly disconcerting.

After a bit of wandering around in the rain, we at last selected a restaurant, and stepped inside to have a light birthday lunch, just the Princess and I.

Perhaps from the early hour, or from the fact that this was a weekday after the long holiday, we had the restaurant entirely to ourselves.

At this point, most of our yen was long gone, but we split an entree, and enjoyed the lovely decor.

And did we neglect to share a slice of cake?

We wandered back through Hiroshima toward The Princess’ family home, traversing along the way the Red Light District which lay between. 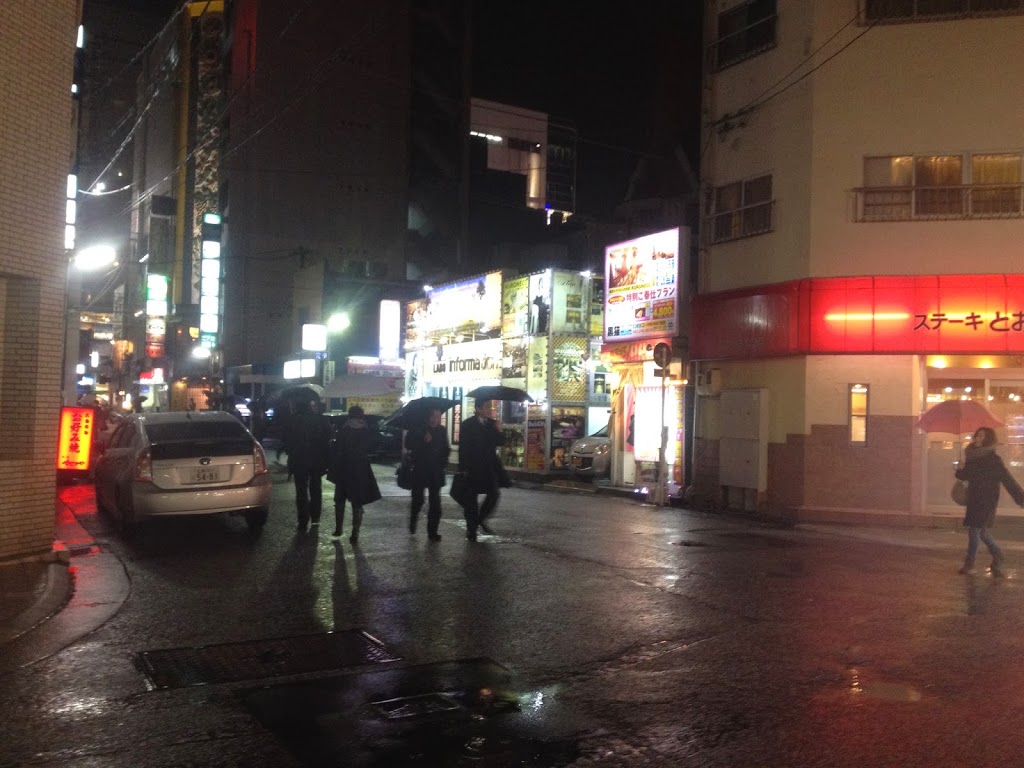 As we neared Hisachan’s house, we stopped by her favorite okonomiyaki shop to grab supper for the two of us and Naoko-san (Koji-san had already returned to work in Kyoto).

As okonomiyaki is a Hiroshima specialty, each person living there tends to have their own favorite shop. This one, run by a brother and sister, has been a Yamada Family haunt for well over a decade. 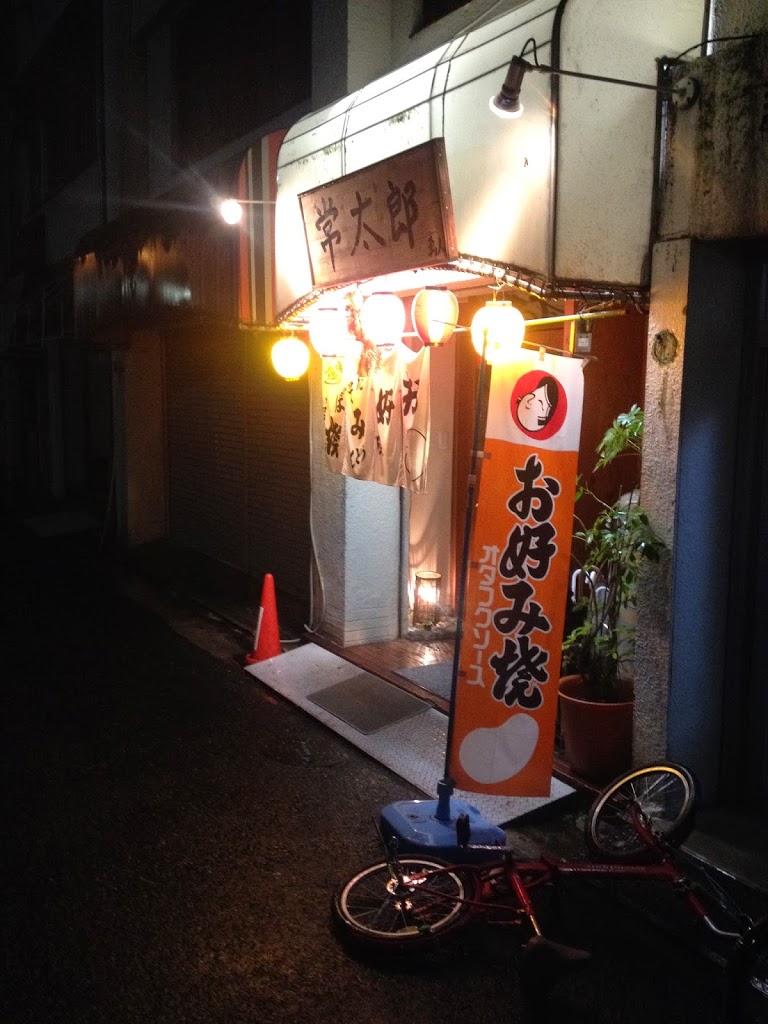 The sister recognized Hisachan, and provided a couple of complimentary beers with her order (Asahi, of course).

Naturally these would be Naoko-san’s and Hisachan’s to share, as I remain the eternal non-drinker. 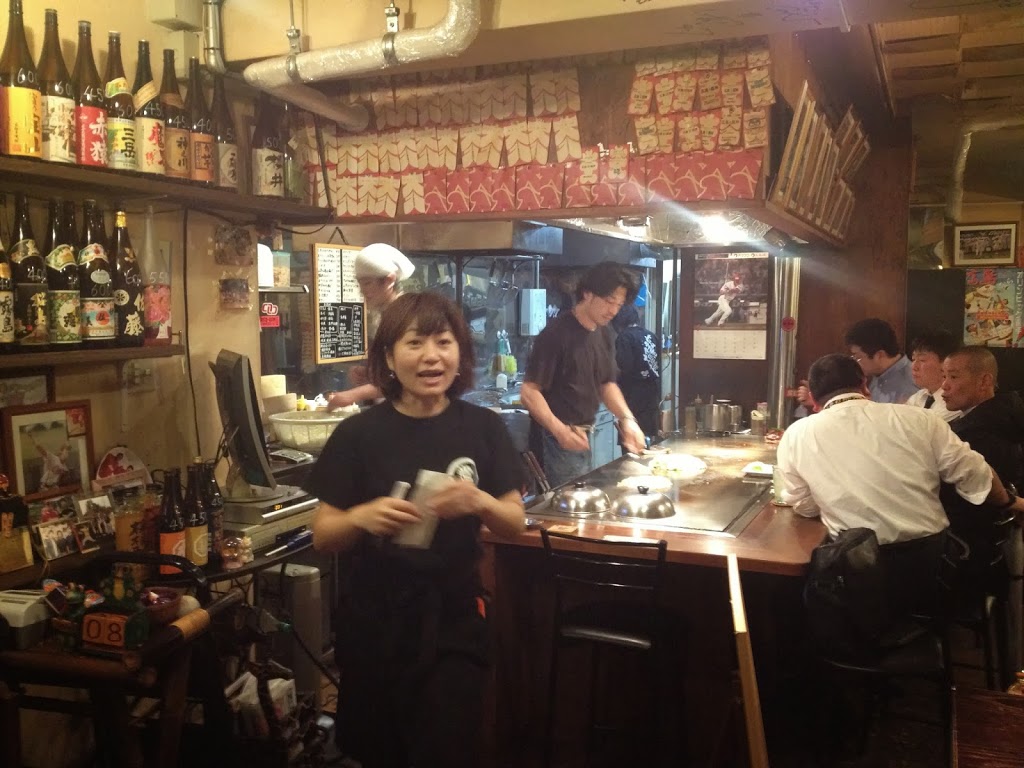 We took our prize home, and devoured it graciously. 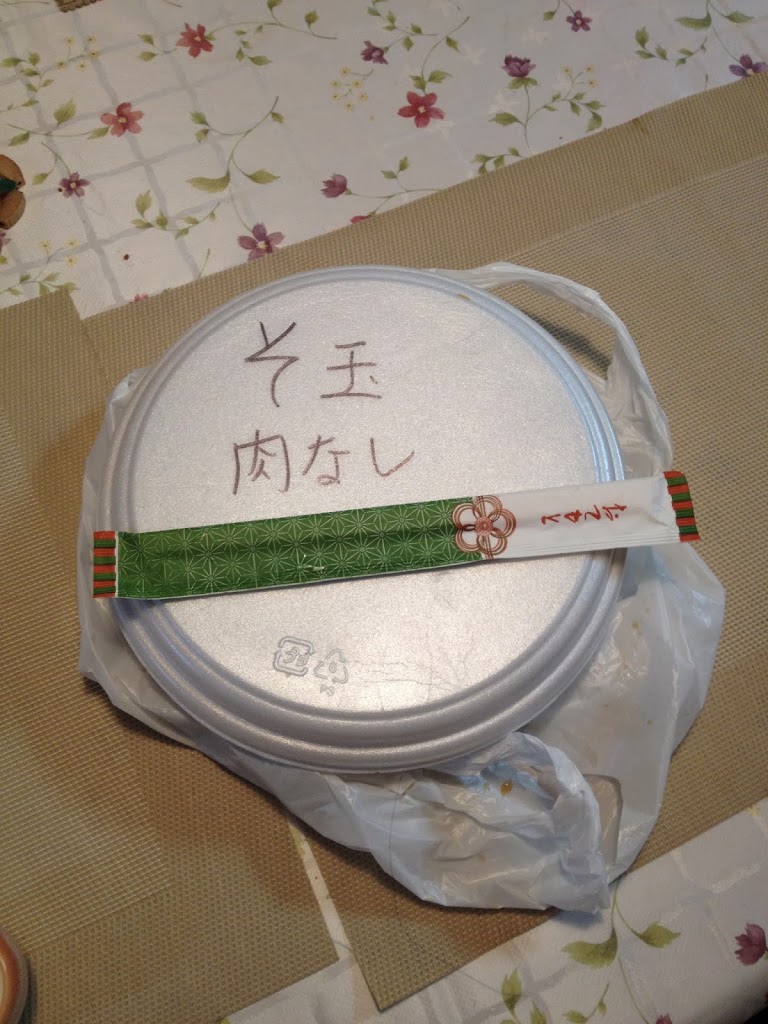 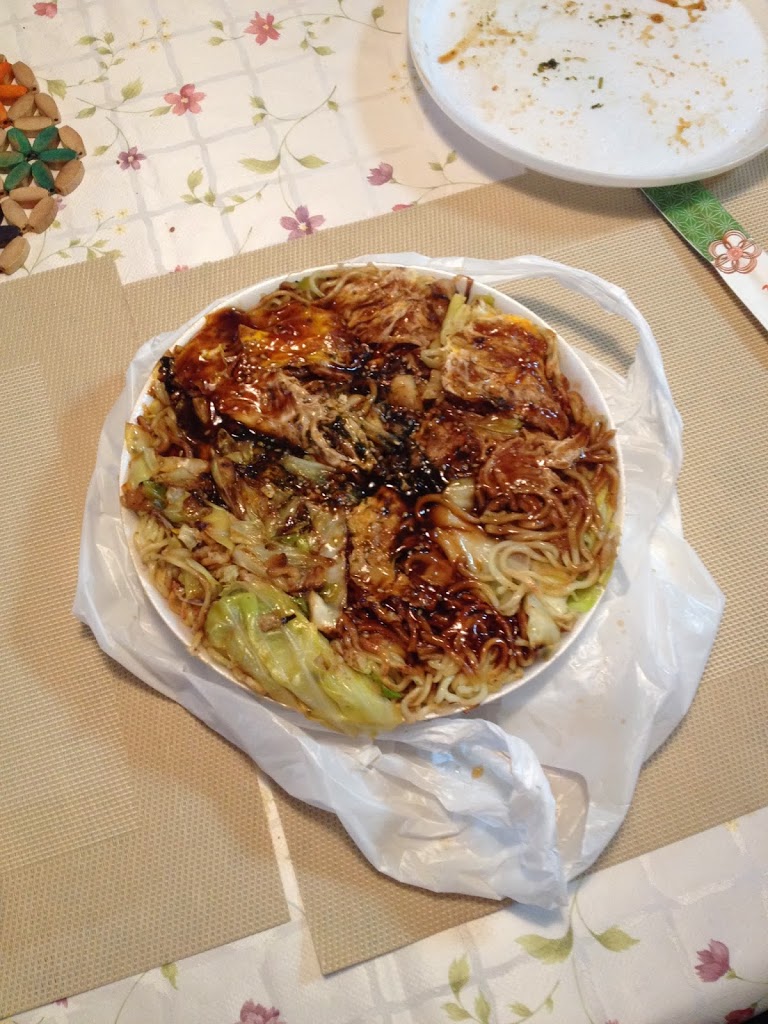 Tomorrow we would depart by bullet train for Kansai Airport.

This would mark the end of our epic journey, and the beginning of our return home.