We ventured a short distance through downtown, and met Hisachan’s friends, Mikichan, Pirochan, and Asachan at the entrance of an okonomiyaki shop. As we went to enter, one of the cooks emerged and began muttering something which I was entirely unable to understand.

My Japanese is certainly not fantastic yet, but the gentleman who spoke to us may as well have been tolling the incantations of the underworld for all I knew. Like an evil wizard in a chef’s hat, whose spell repelled us from the door of his savory-smelling crypt, and back into the foodless fathoms of the hungry night.

As we departed, I asked The Princess what on earth had just come out of that man’s mouth.

“Hiroshima-ben,” she answered, that being the (notably inelegant) dialect of the Hiroshima region generally attributed by the people of Japan to country bumpkins and Yakuza thugs. “He said they’re closed for the night,” she added.

To be fair, The Princess and her family speak a version of Hiroshima-ben at home which I am capable of muscling through, but as with all dialects, there are levels of severity, and what I had just heard was like to the third degree.

Following a brief interlude spent in search of backup okonomiyaki, we at length surmounted a flight of steps into the warm interior of a second okonomiyaki establishment, this time devoid of evil wizards of any description, chef’s hats or no.

We sat down to a table with a large grill plate embedded in its top. A normal-Japanese-speaking waitress took our order, and in a few short moments, a bottle of champagne was delivered to our table in a shiny bucket of ice. Seconding this was a bottle of ginger ale for the straight-edge ginger at the table (that being me).

Mikichan filled the glasses, my own excepted, and they named me to make the toast. As much as I wanted to expound upon something elegant and poetic to the effect of “friendship being ever the finest addition to a feast,” I knew that whatever passed my lips would need to be translated by Hisachan to the others. “To good food, and Best Friends,” I summarized, to which all sides gave a spirited “Kanpai!” (“Cheers!”). 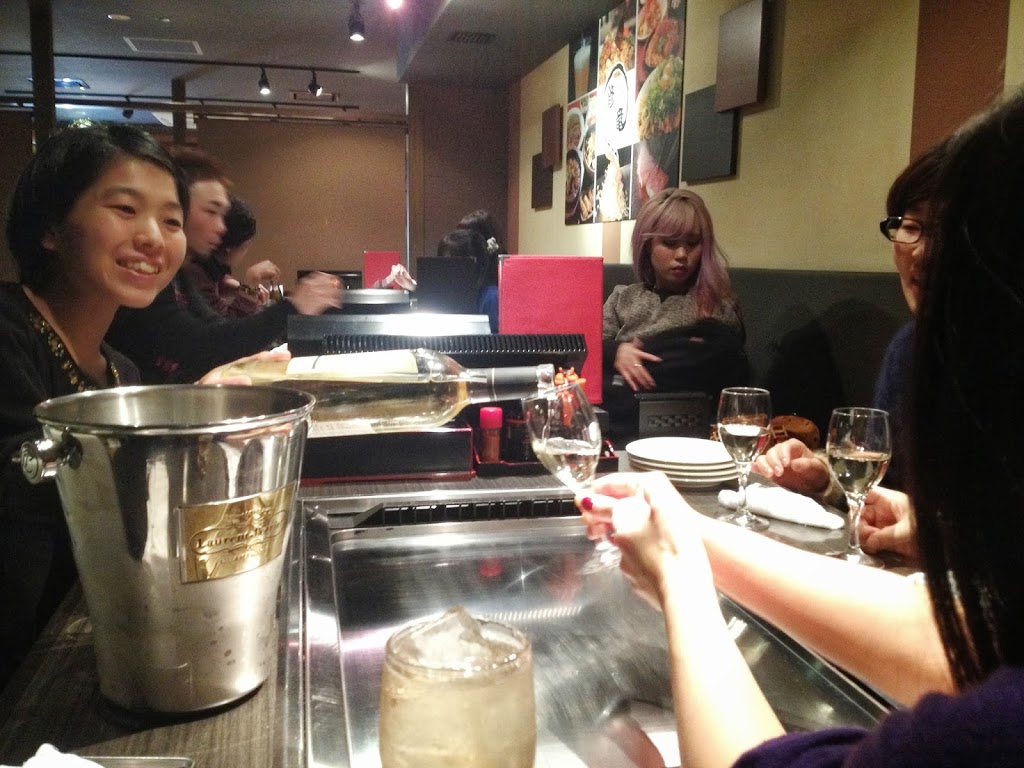 One of my few less-favorite things about Japan is that people are allowed to smoke inside restaurants, bars, and cafes.

We just banned that shit in Portland a few years back. However, people are starting to wise up to the evils of tobacco in Japan, slowly but surely—in the area around Kyoto station, for example, there has been a movement to eliminate indoor smoking sections altogether. 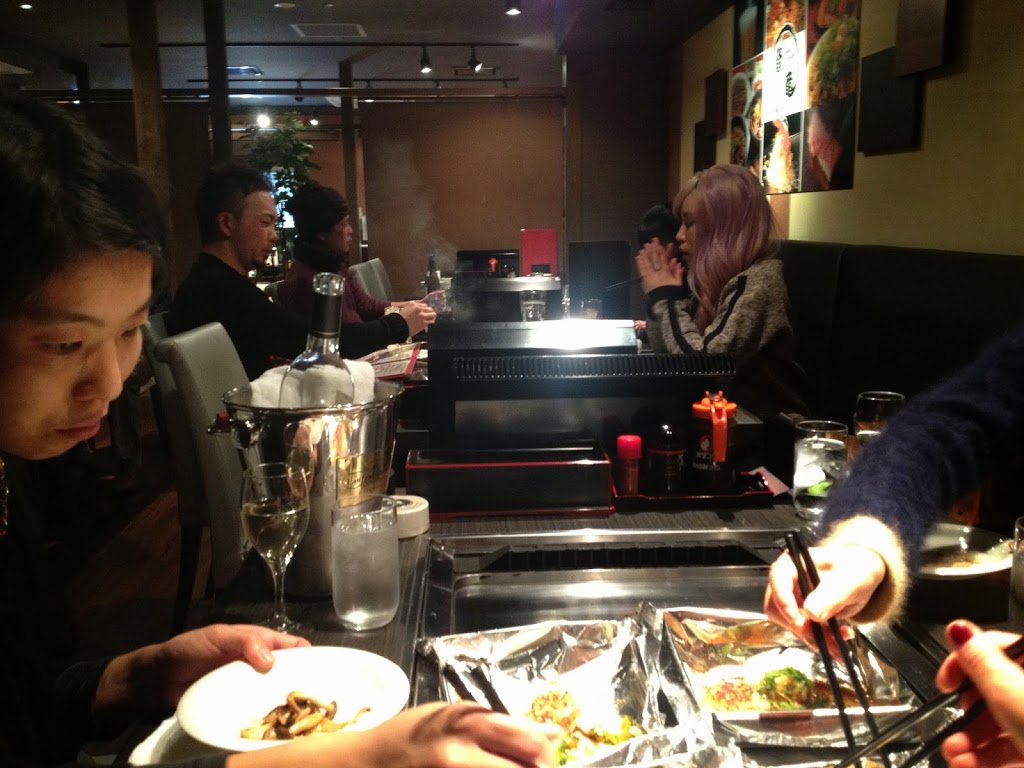 Soon the comestibles began arriving at our table, where they were placed upon the grill plate to cook. As we waited, we indulged in a round of edamame. 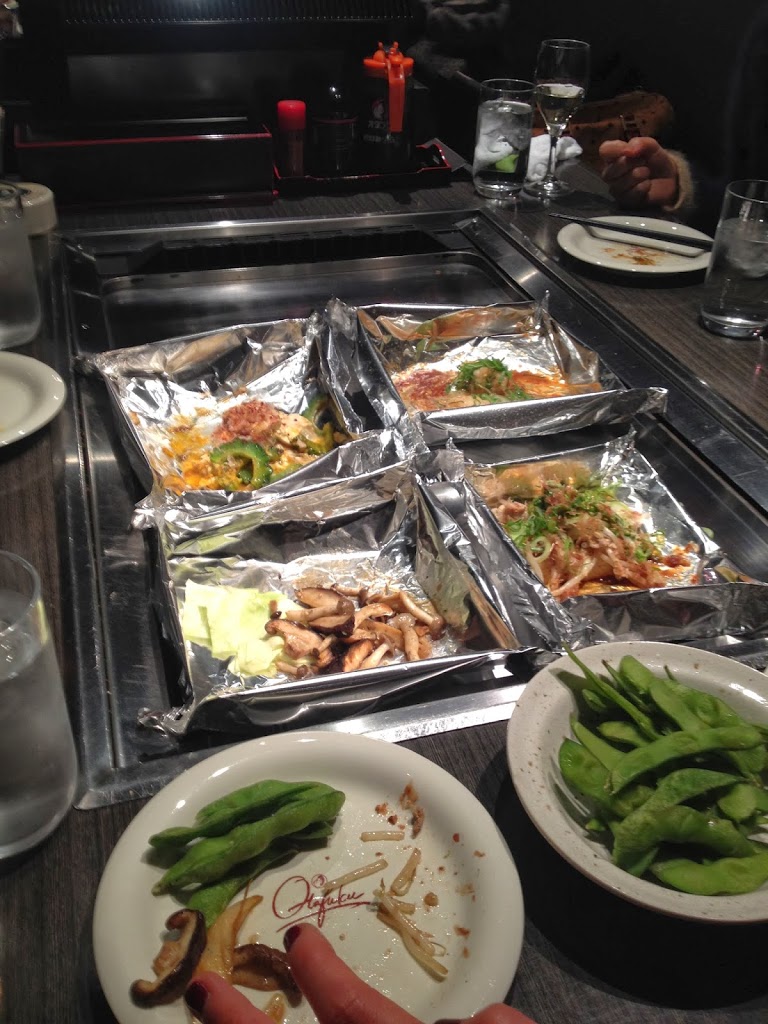 Okonomiyaki, essentially a species of savory pancake, literally means “grilled as you like it,” and as the name implies, the ingredients vary according to customer preference.

The basic template consists of an egg-batter, cabbage, pickled ginger, and any number of other items you may wish to add (including cheese, veggies, and most forms of dead land and sea animals). This concoction is then grilled up and coated in okonomiyaki sauce, which is somewhat similar to Worcestershire sauce, only sweeter. 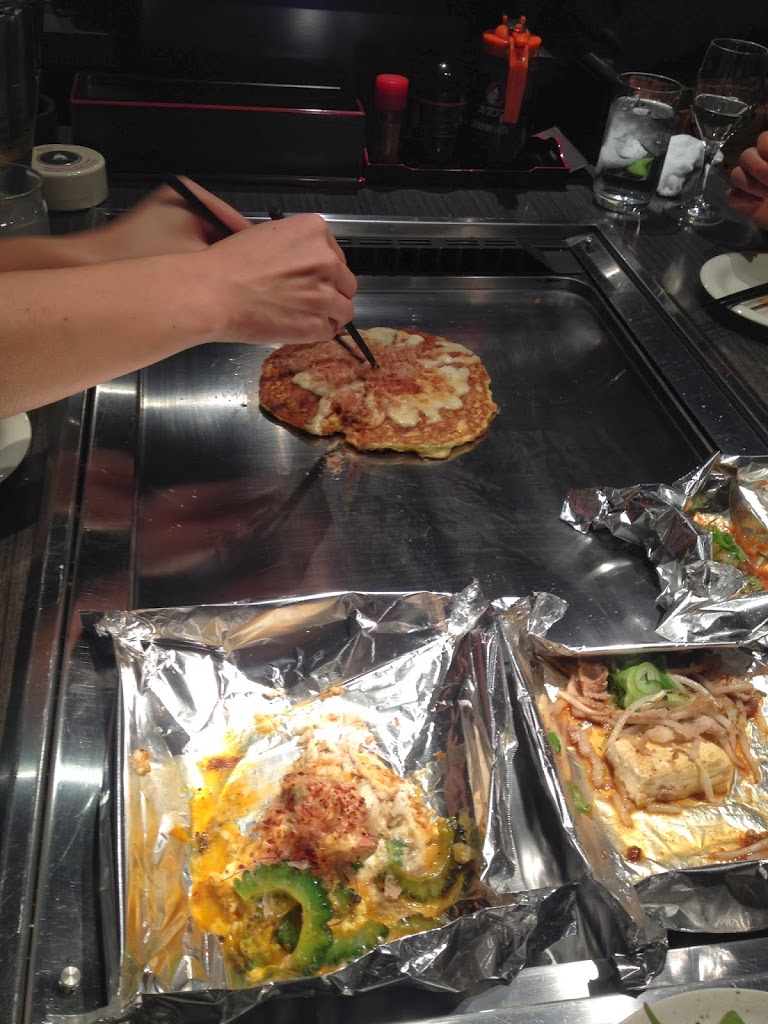 Each area of Japan boasts their own style of okonomiyaki, though the Hiroshima style differs more widely than styles found in other regions, with the main difference being that Hiroshima-style jiout484ety]=-[o’p;k…

IS THE BEST OKONOMIYAKI IN JAPAN…maybe…because it is actually a large portion that you can bring left over back home. Also, most of ingredients are vegetable, it does not give you a heavy feeling or upset stomach after you eat. It is healthy and low calory, and it has a lot of vitaminCs. Hiroshimayaki looks better. Hiroshima carp jyaken! Okonomiyaki from other area is a kind of a snack food or kids food. but, Hiroshima style is actually a food. Hiroshima person has a huge pride to their okonomiyaki. Tourist go to okonomiyaki shop on the magazine, but local go to a specific one. I like my neighboor okonomiyaki shop the best. We use a special souce made in Hiroshima. Of course this is Peter writing…maybe…Hisako is not a type of person who can say her opinions in public…only in mind.

…While other regions mix the ingredients into a single batter, Hiroshima-Style layers the ingredients together, adds a heap more cabbage so that it actually cooks down into an entire layer all its own, and tosses noodles and eggs on top.

And yes, it is the best. 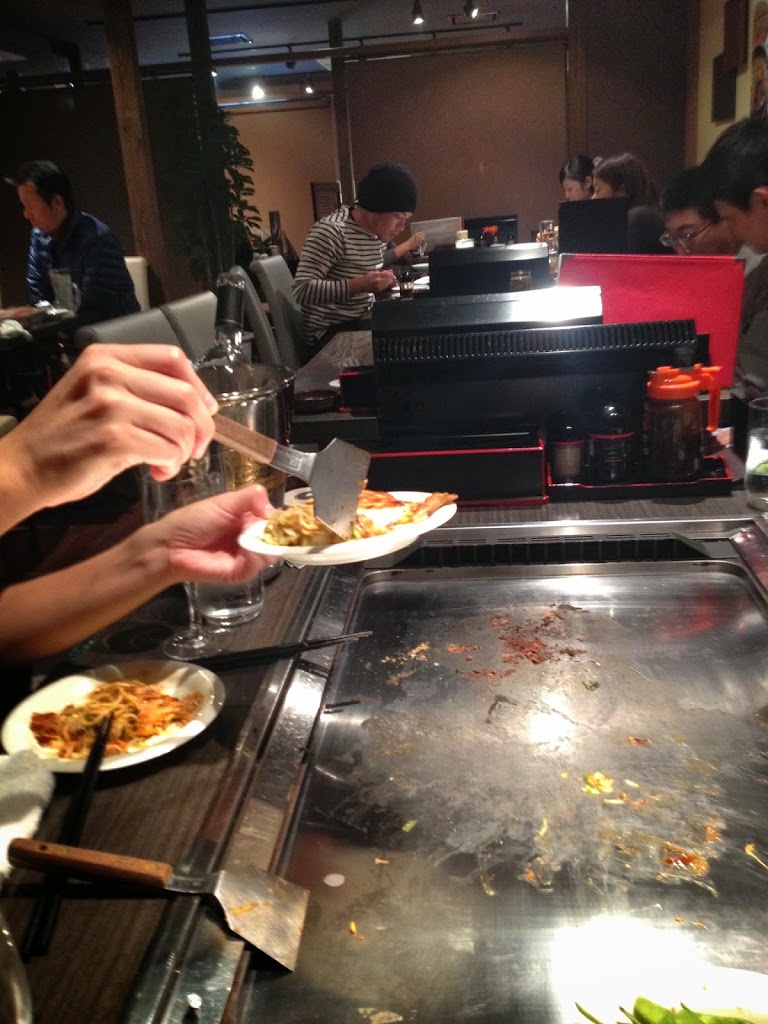 Okonomiyaki is sometimes referred to as “Japanese Pizza” by Westerners, and just like Western pizza, is best served hot, and in slices which fall apart if handled improperly.

Mikichan is an expert okonomiyaki wrangler. I think most Hiroshima ladies are.

2 comments on “Okonomiyaki” Add yours →