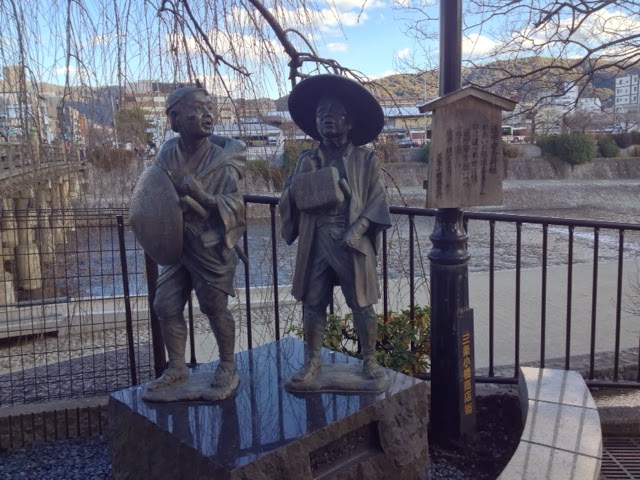 Here we find a small stream, no doubt connected to the Kamogawa, peacefully flowing by shops, restaurants, and inns. 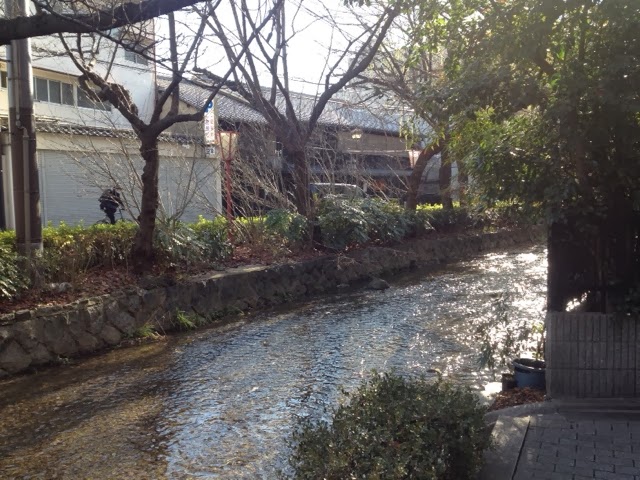 We duck down a narrow alley lined with lanterns, as Koji-San informs us that this is considered to be one of the most romantic places in Kyoto.

As we stroll by fine restaurants tucked into this quiet lane, sweethearts hold hands in the lantern light, and here and there when Koji-San isn’t looking (so as not to embarrass him, of course) we too factor among them. 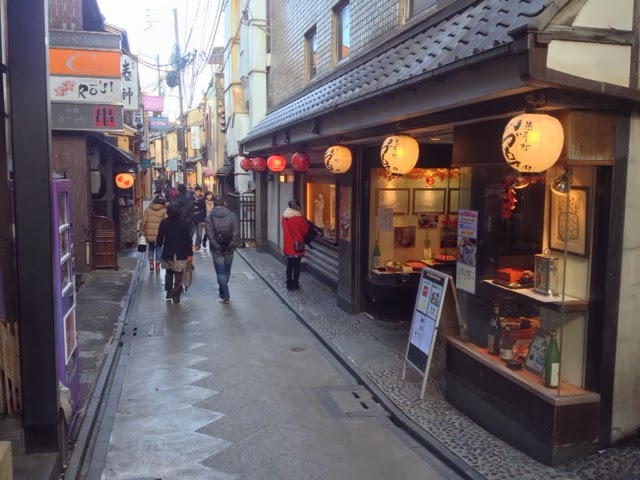 Wandering up through Gion, we begin to ascend a hill replete with antique architecture.

Though shops and restaurants still dot the streets, here we find residences, no doubt belonging to the sorts of folks who one finds in all countries living atop hills. I was warned that people in Kyoto are snobby, though in my experience Kyoto-Jin have been nothing of the sort.

However, if there are snobs to be found in Kyoto, I bet they live in the houses on this hill. 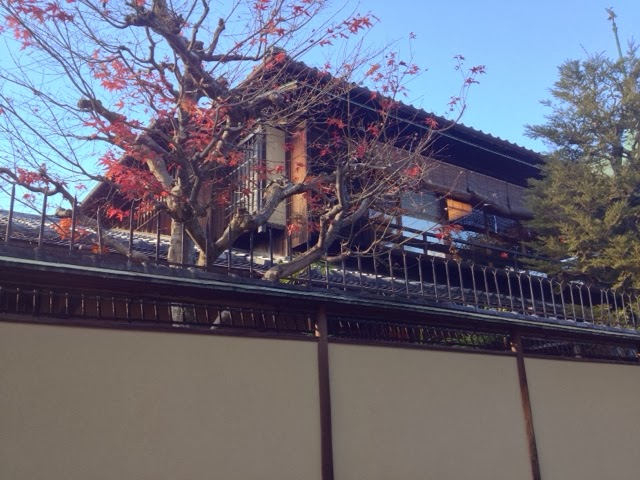 We wound our way to what is now a temple, of sorts, yet which was in former times the residences of Toyotomi Hideyoshi and his wife Nene-Sama back when Kyoto was still the feudal capital.

For those of you who are a bit rusty on your Samurai History, Toyotomi was the Big Cheese in Japan during the late 16th century. Nene-Sama was his wife, who he married out of love (a rare occurrence at that time in Japan) when he was a young man.

Toyotomi actually started out as a peasant foot soldier, and through military cunning, and probably some double-dealing reinforced by a silver tongue, he eventually rose to the status of Daimyo, which is one of the Japanese words for “Big Cheese.”

It was during his humble beginnings that he met, fell in love with, and married Nene-Chyan, then but a peasant’s 14 year-old daughter, and he a man of 26. 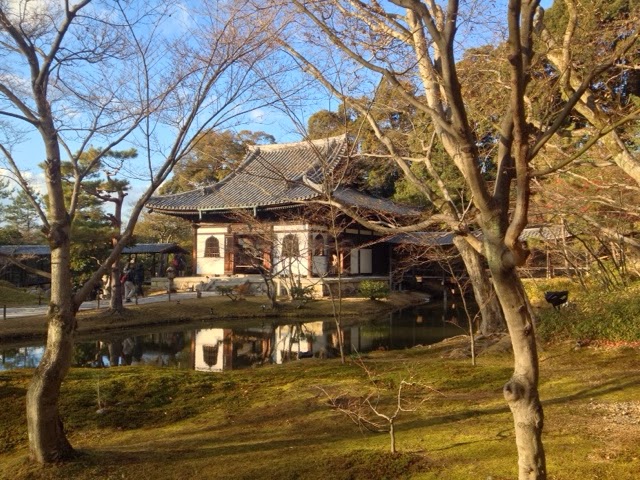 According to The Princess, Toyotomi was quite ugly.

“He looked like a monkey, and was bald,” she exclaimed.

When considering this, their age difference, and the fact that they were, at the time of their marriage at least, nobodies, one cannot help but believe that their marriage really was out of love.

Of course, this did not stop Toyotomi from exercising his Big Cheese Privileges, once he attained them, by acquiring several additional wives, but hey—who’s counting, right?! 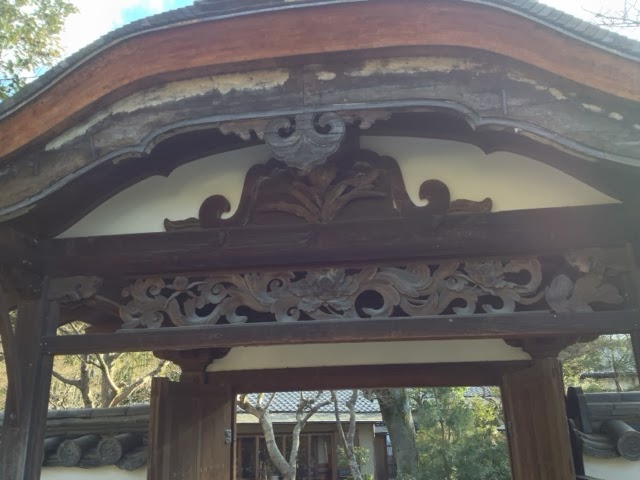 Toyotomi, perhaps owing to his humble beginnings, was a man who loved gold. Throughout his estate, countless objects were painted, inlaid, or otherwise plastered with gold. As impressive as all this sounds, I found his estate to be more opulent than tasteful.

Kinda like a samurai version of the Beverly Hillbillies.

But I guess that’s to be expected, all things considered. Coming from a poor background, such showiness probably helped secure the respect otherwise automatically granted by pedigree. 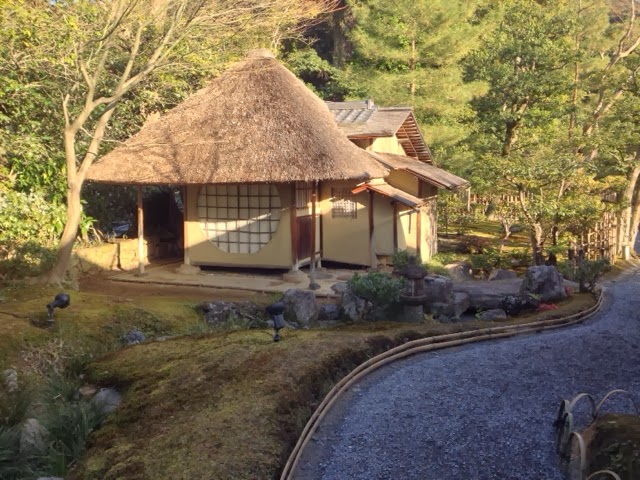 In addition to the effects of witnessing such relics of antiquity, I was equally impressed with the ways in which modern technology had been seamlessly and unobtrusively integrated within them. Lights of no small caliber lay concealed behind bamboo screens, or sat tucked beneath flawlessly antiqued iron tiles. 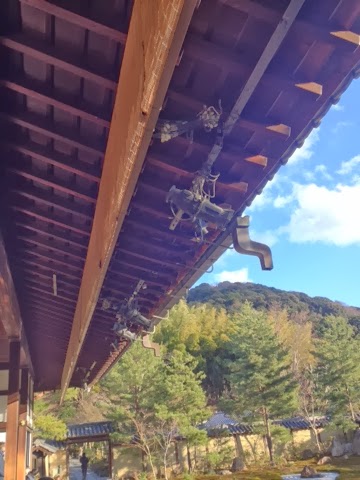 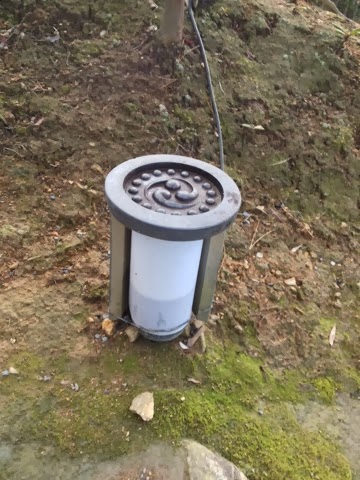 Among the many ancient structures upon the estate were Toyotomi’s own quarters, a teahouse run at the time by the great Tea Master Rikyu, and a stunning shrine honoring Toyotomi’s ancestors, built from the repurposed, gold-festooned remains of the warship which Toyotomi had commanded during his naval battles with China.

Other portions of his ship were similarly repurposed elsewhere on his estate. 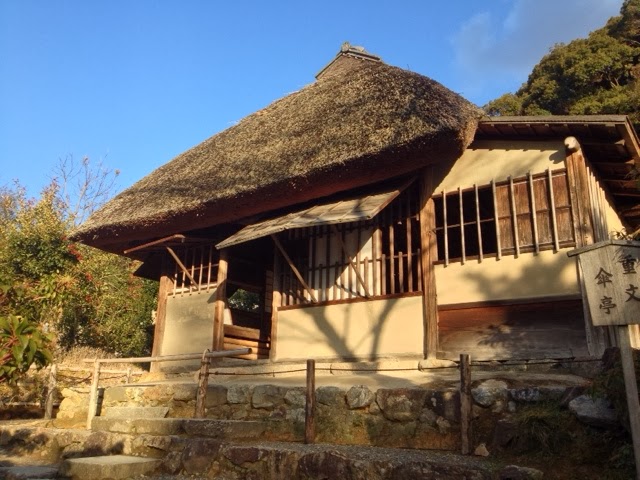 Within Toyotomi’s ancestral temple, the paintings of mythical figures and legends which graced the ancient bark of the ship had long since begun to fade.

Though photography was expressly forbidden, I asked one of the curators if I could photograph the donation box into which visitors cast their coins before giving thanks through prayer to Japan’s founders.

She agreed, and I carefully moved in to frame my shot, capturing only the box, it’s slats worn bare from the countless coins cast upon them. 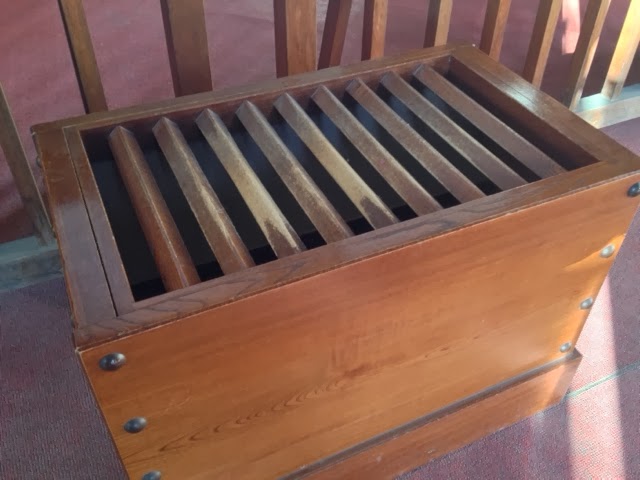 Aside from the damage which flash photography can cause to ancient works, places such as these are among Japan’s national treasures.

As Kyoto had been spared from bombing during World War II (specifically because there existed at one point an intention to nuke it, along with Hiroshima, instead of Nagasaki–not kidding), these structures were basically the Real McCoy—carefully maintained and restored over generations.

The roof of Rikyu’s teahouse had been replaced 37 times, we were informed, but the walls and floors were the very same which Toyotomi sat within more than four hundred years ago. 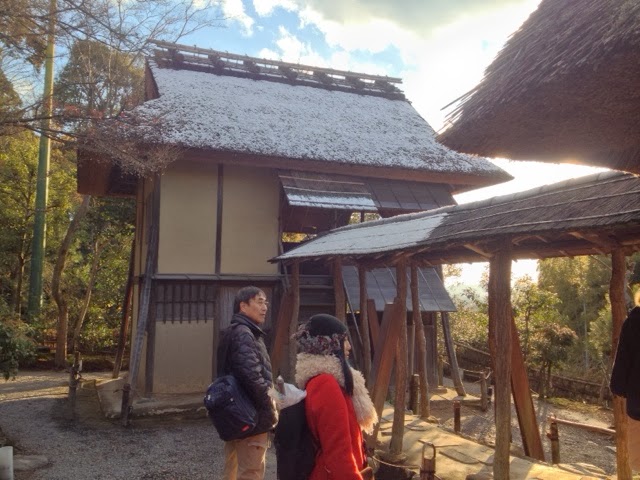 We passed through a lane bordered with ginormous bamboo, and headed out toward the estate of Nene-Sama. Don’t let anyone convince you that everything is smaller in Japan.

The bamboo is NOT SMALLER. 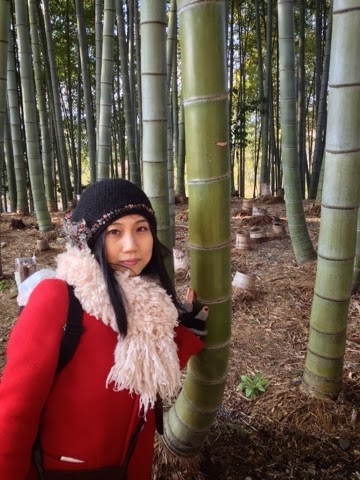 Nor was the Buddha of Unspeakable Magnitude on the other side of the lane, for that matter 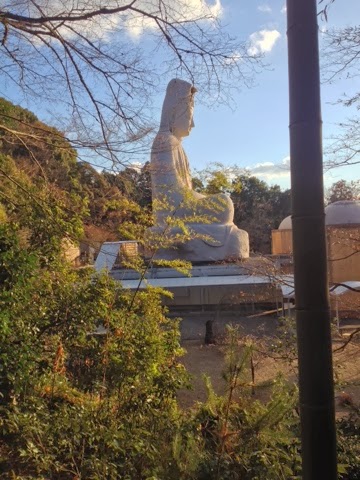 We moved on, and discovered a row of curious ornaments. Apparently, turning these spinning decorations, each enscribed with a Buddhist koan, or prayer, is equivalent to reading a scroll of Buddhist teachings in its entirety.

To fully understand why, chances are you will need to have already attained enlightenment. That’s the way the simultaneously existing and nonexisting crumbling cookie is reborn, I guess. 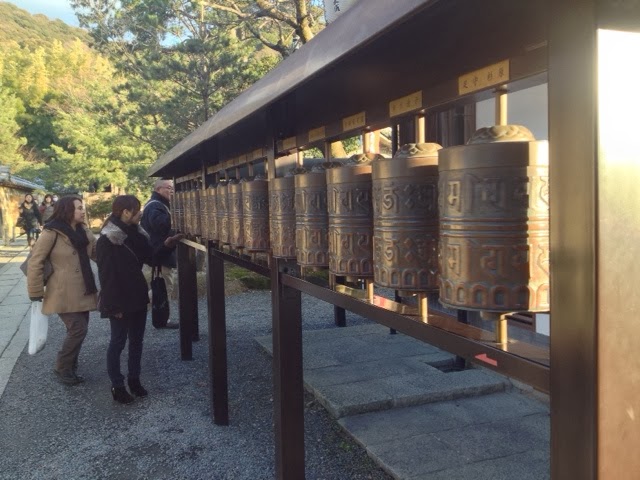 Along the way we encountered a helpful Shinto cow diety purported to remove unwellness from your body.

You simply touch the cow statue at whatever point on its body corresponds with the place on your body which needs fixing, and—hey presto!—the friendly diety will assist to remove the trouble.

The official medical value of this treatment I will leave to other scholars to determine. 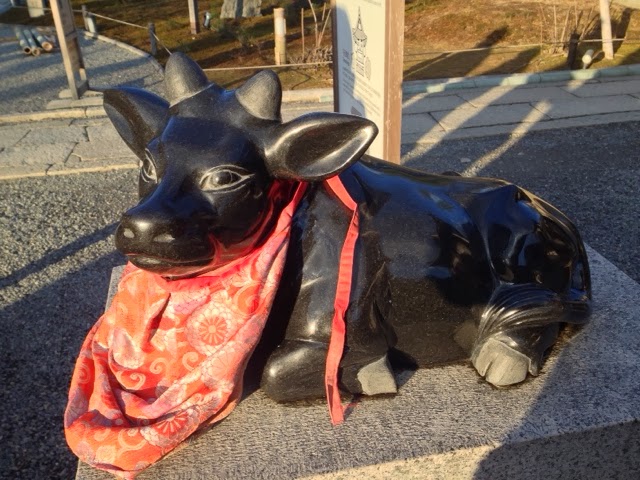 We moved along to Nene-Sama’s estate. Fortunately, Nene-Sama’s taste in decor did not equal her taste in men. Unfortunately, we were inside her magnificently gorgeous estate the whole time, and there was no photography allowed. 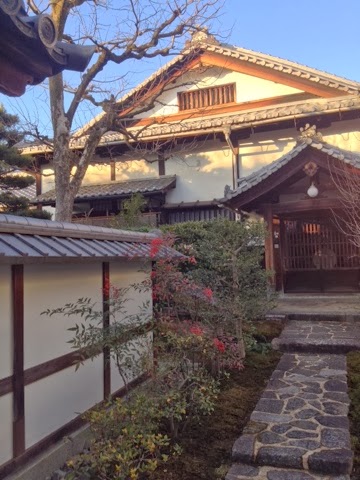 We left the estate toward a lane lined with rickshaws, and passed a lovely couple dressed in winter kimonos sitting hand in hand upon an ornate bench. As we walked by them, I exclaimed to Hisachan in Japanese, “Ah, that princess is beautiful, isn’t she!”

I glanced back to examine the effect this had on the lovely couple for whom it was intended, and saw to my satisfaction the young lad smiling as the lady blushed. 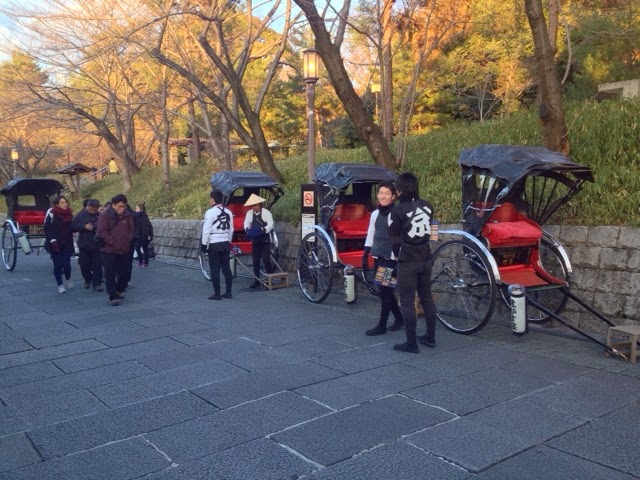 Up the lane, we even saw a Geisha strolling our way.

Even Japanese folks, upon sighting a Geisha, gasp and exclaim aloud, as one who sees a rare and beautiful bird flutter unexpectedly before them. To request a photo from her would have been to put her on the spot, and yet to merely take a picture uninvited seemed rude.

I opted for a safe middle ground, and again uttered aloud something to the effect of, “Isn’t she beautiful!” as I snapped my shot.

With a level of grace and pride fully fitting her station, she silently glided by. 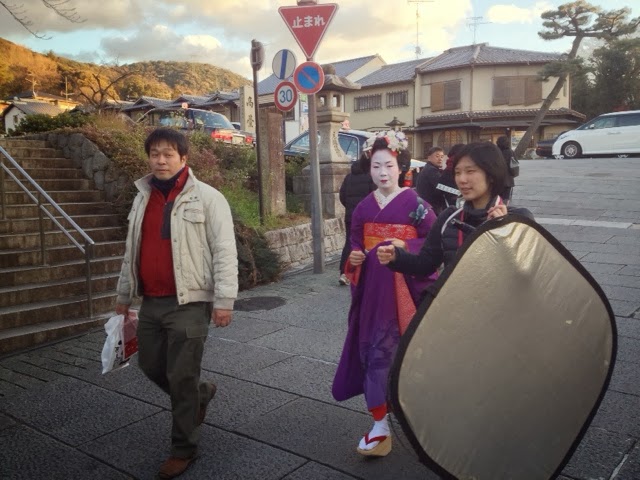 Too worn out to proceed to Osaka Castle as planned, and with a five hour road trip awaiting us the next morning, we grabbed dinner at Kyoto Station, and returned to Koji-San’s dormitory for an early rest. 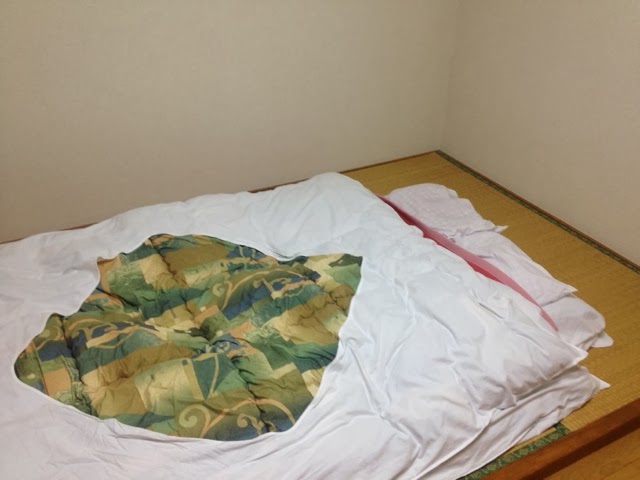