This particular shrine, called Gokoku Jinja, has no specific Kami, but rather commemorates those who perished in the wars of Japan’s past, up to and including the victims of the atomic bombs. A place to honor former lives.

This particular shrine, called Gokoku Jinja, has no specific Kami, but rather commemorates those who perished in the wars of Japan’s past, up to and including the victims of the atomic bombs.

A place to honor former lives.

Of course, unlike America, which has been constantly at war since its inception, Japan has not been to war since WWII ended, and in fact no longer even has an army (though it does boast a heavily militarized “Self Defense Force,” but that’s another matter). 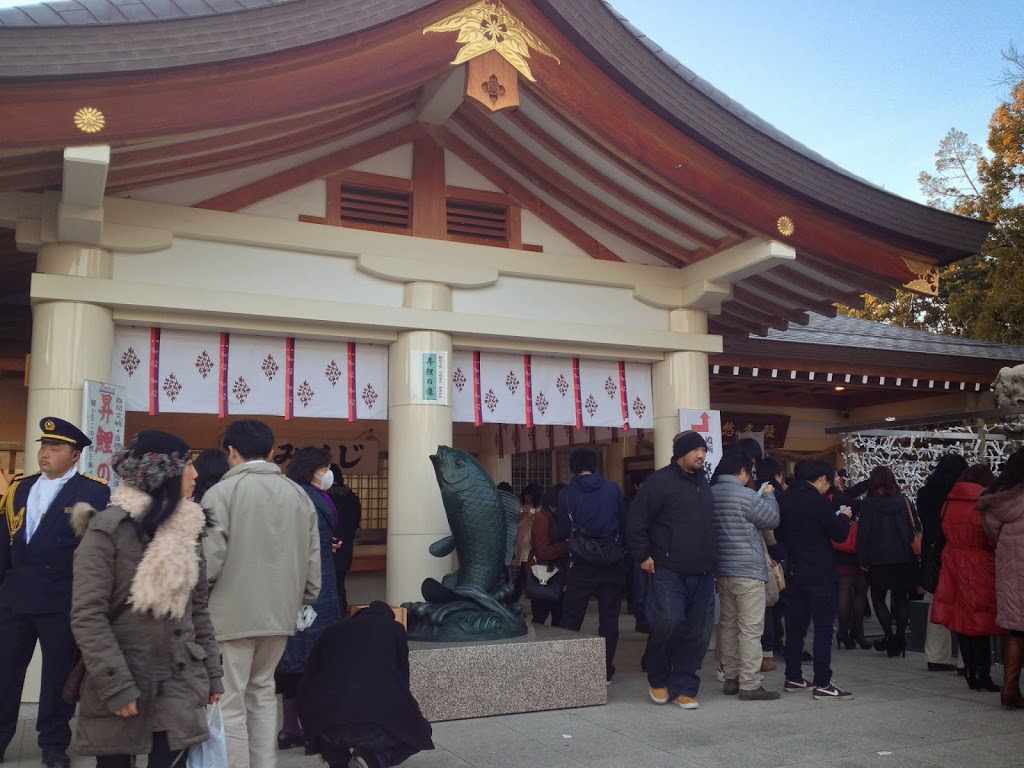 Though founded in the late 1800’s, this shrine, like all historical buildings in Hiroshima—with one very important exception (which we will soon explore)—was built after 1945. Not only the people of Hiroshima, but their history, too, was destroyed in that terrible blast.

Together, the Princess and I went up to the main part of the shrine, threw in our five-yen, bowed twice, clapped twice, prayed and bowed, as per protocol.

During this time I wondered, as a Western atheist, what kind of prayer I should say. Mostly I thought about how, even though I’m technically an American, my family history isn’t from the States. In fact, during WWII, my ancestors were in Europe having a Really Bad Time.

Yet thinking about being exempt from responsibility to the atomic bomb victims made me feel like I was missing the point. “I” versus “The Other.” “I didn’t do it. They did it. Those people. Not me.” I was thinking like a Westerner.

The fact is, we are all part of the human group, and humans did this. We did this. And by association, I did this.

“Domo arigatou gozaimasu, thank you.” I said as my prayer, “Moshiwake gozaimasen, there is no excuse.” This last phrase is one of the humblest apologies in the Japanese language, and used only at times of greatest deference. 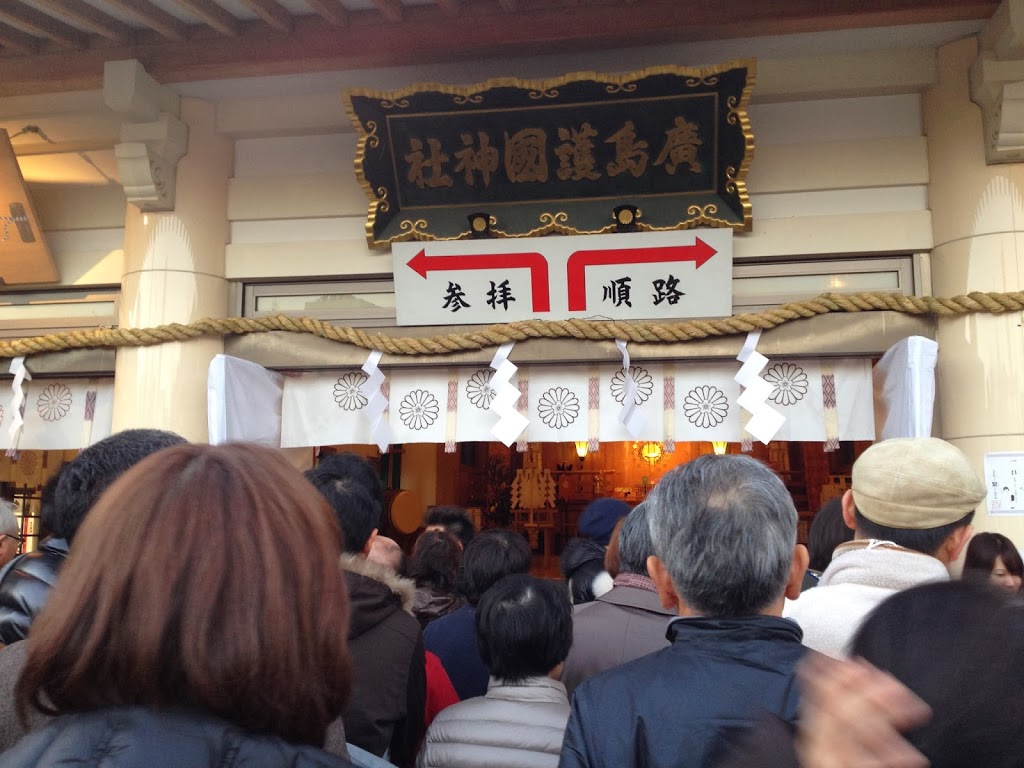 Within the shrine, we found beautiful carp statues which we of course prayed to for good luck.

As it turns out, the Carp is one of the official symbols of Hiroshima, and in fact their baseball team is even named “Hiroshima kaapu,” or “Hiroshima Carp.” 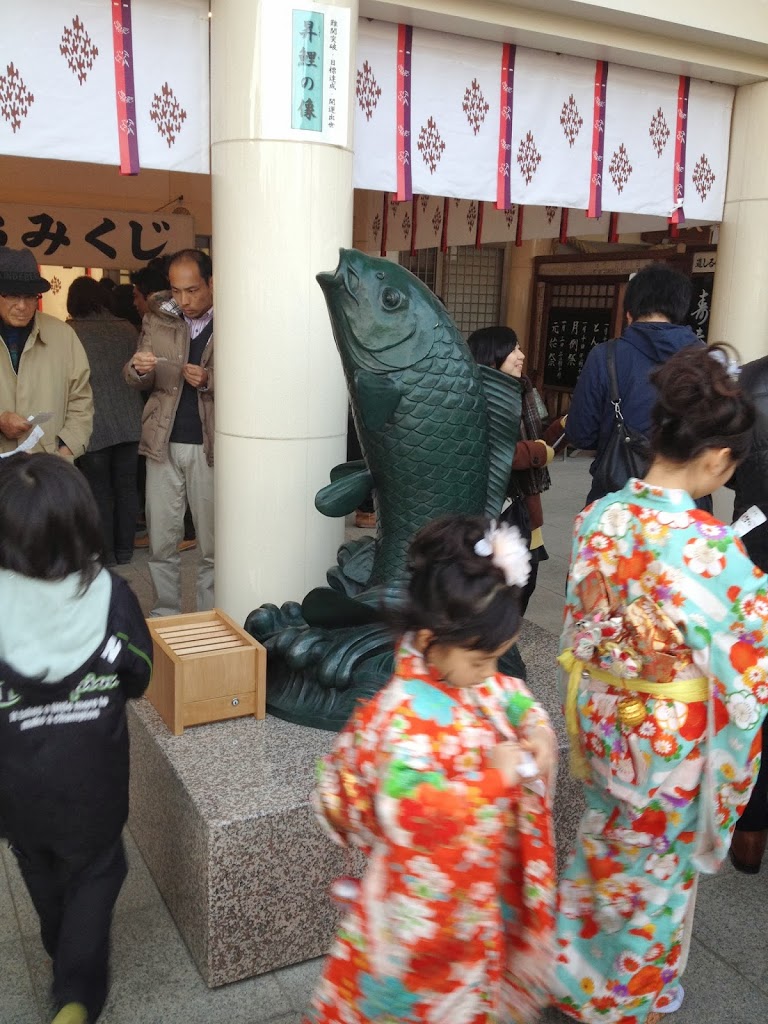 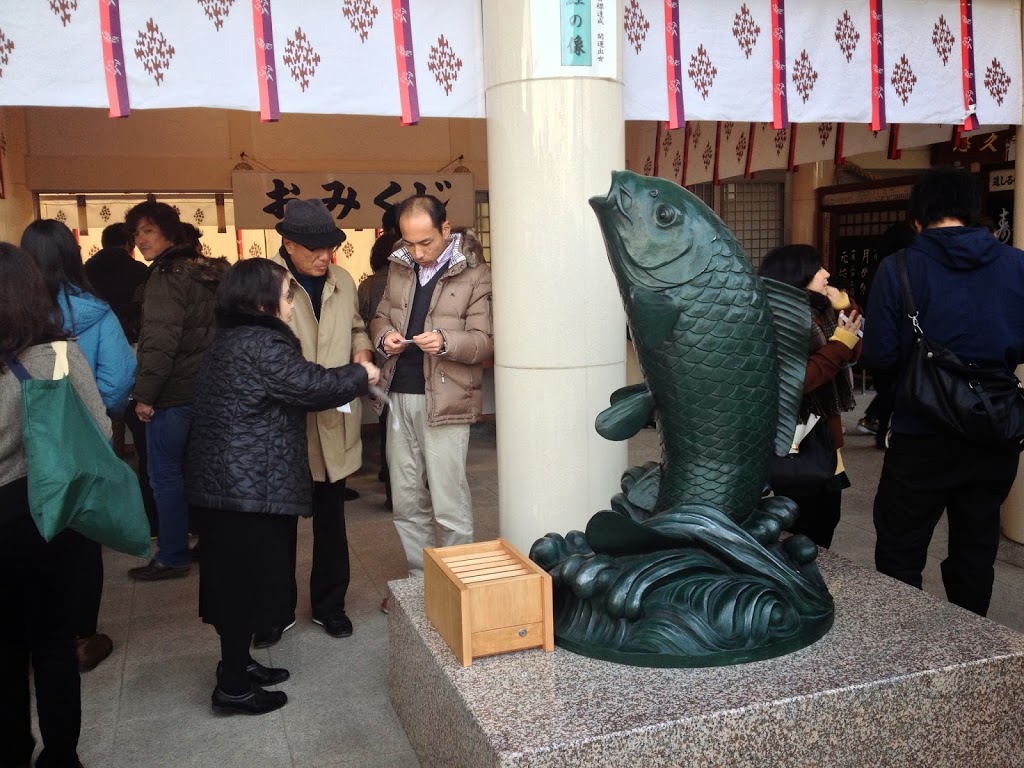 The two “kaapu” together represent happy lovers, and so we decided to pray to them twice, just for good measure. 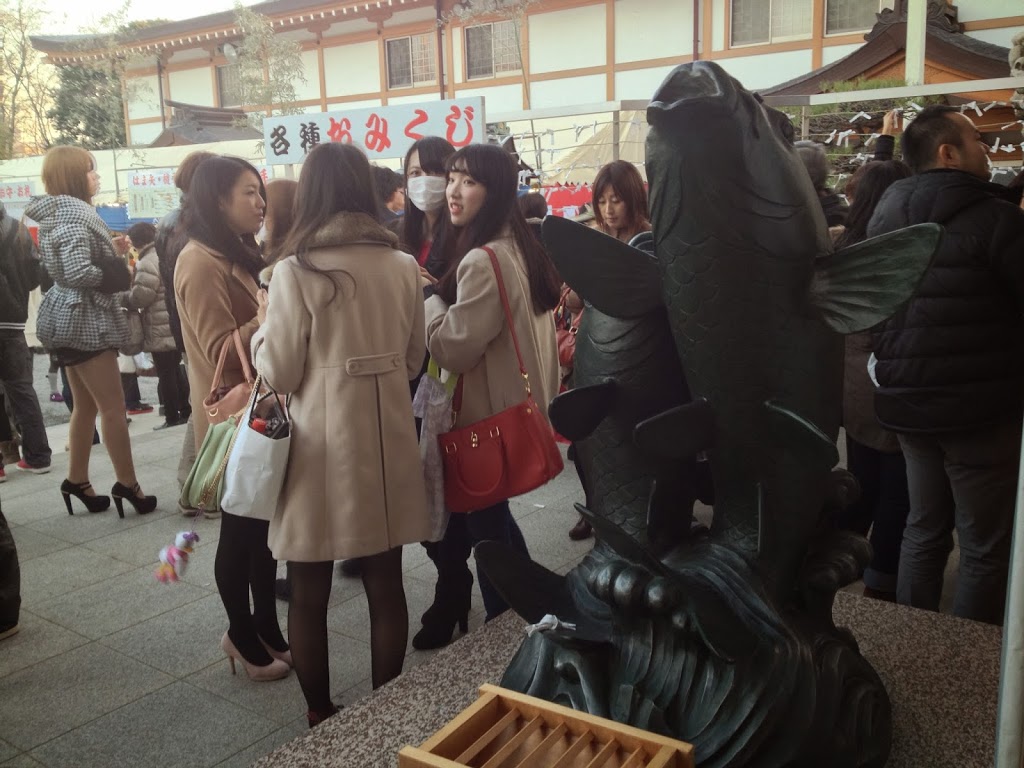 Stiletto heels? An hour spent wandering around a gravel lot? The Samurai-Foot fears not these things. 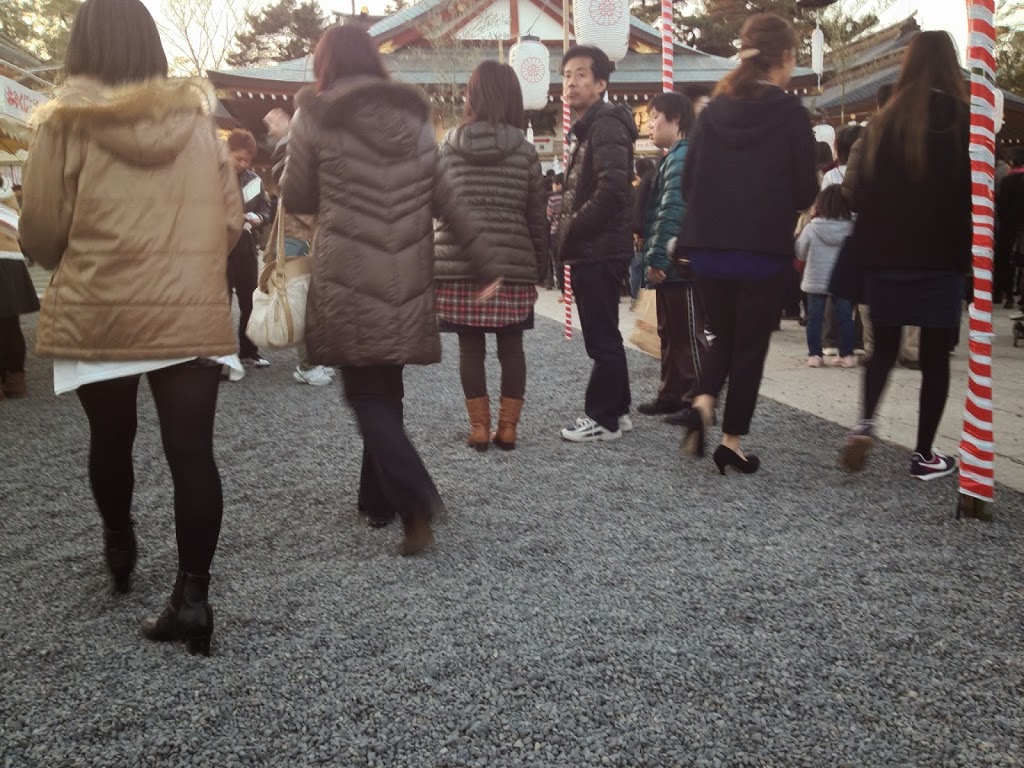 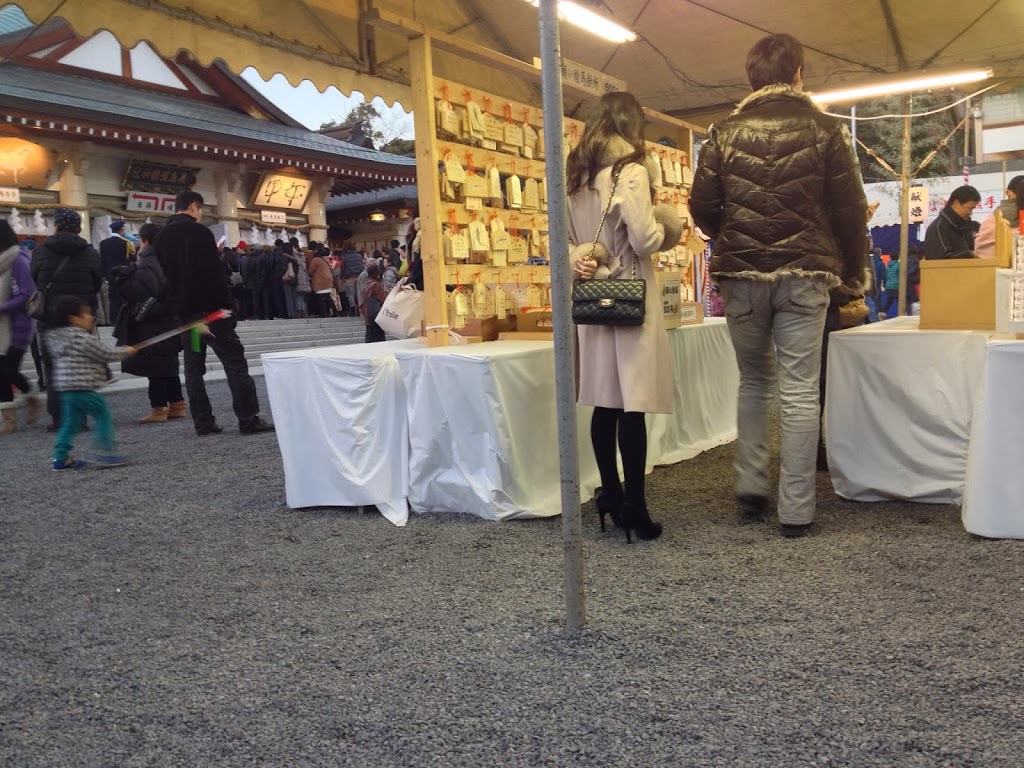 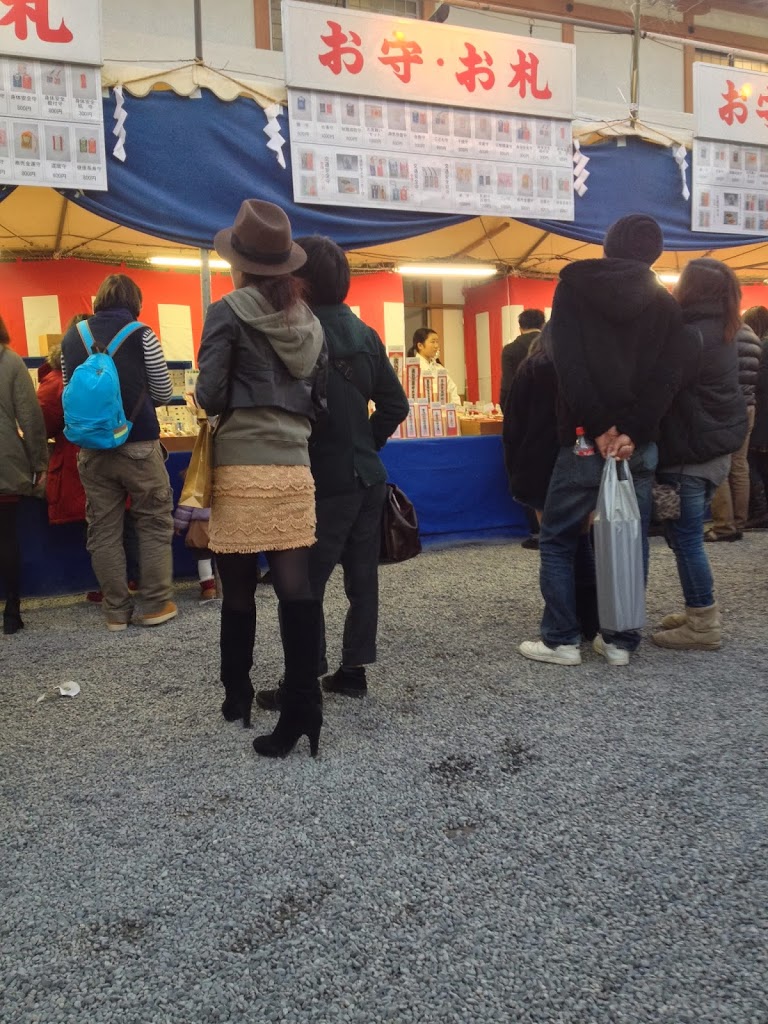 On our way back, we stumbled upon another victim of the atomic bomb—and one which, oddly, I had not thought about prior to actually seeing one in person.

Mangled, burned, and propped up with ropes and staves—Hisachan and I found a tree which had survived the atomic bomb. And you know, when I thought about it in that moment, I realized I hadn’t seen one old tree the whole time I had been in Hiroshima. 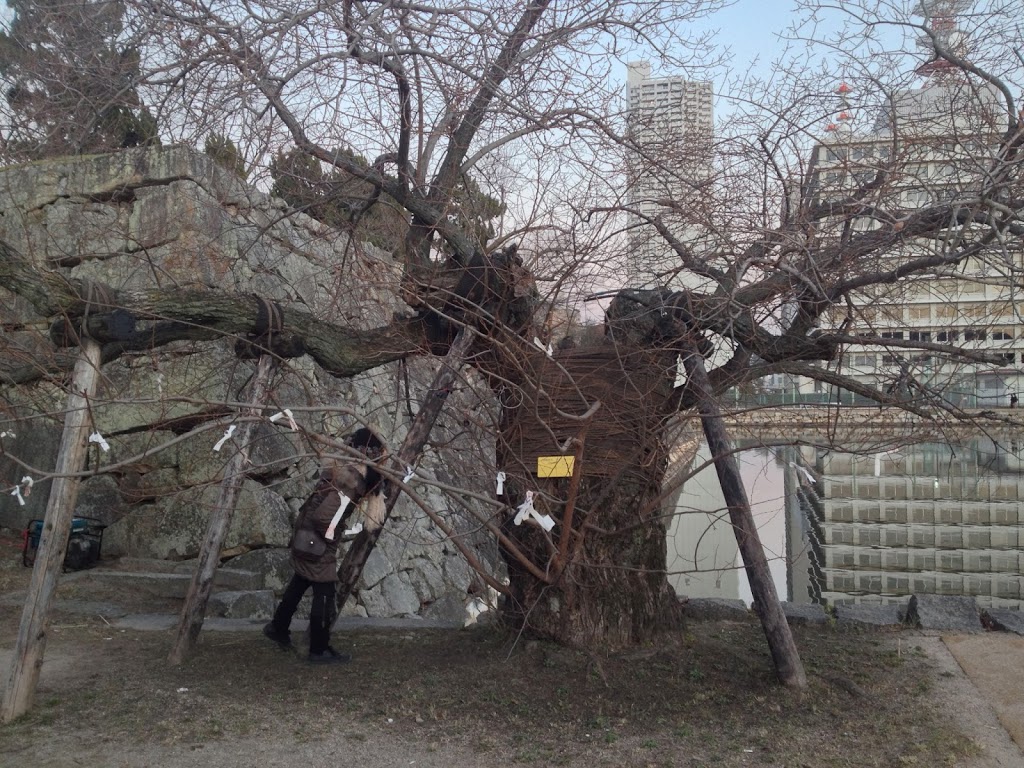 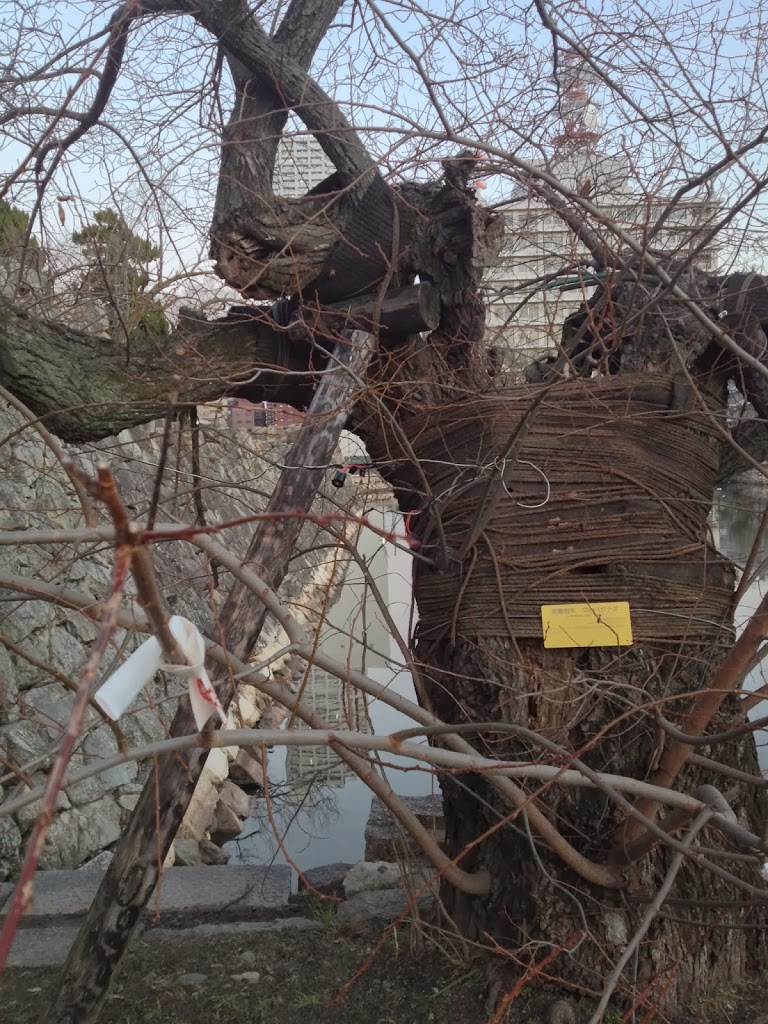 Across the lane we found another survivor. 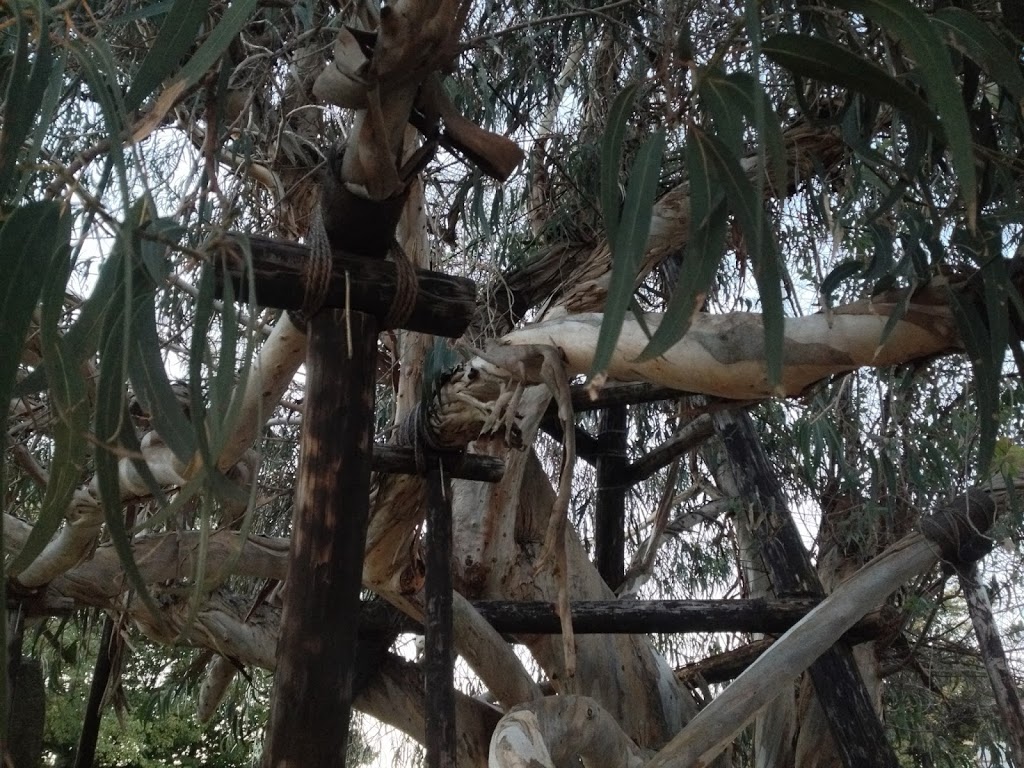 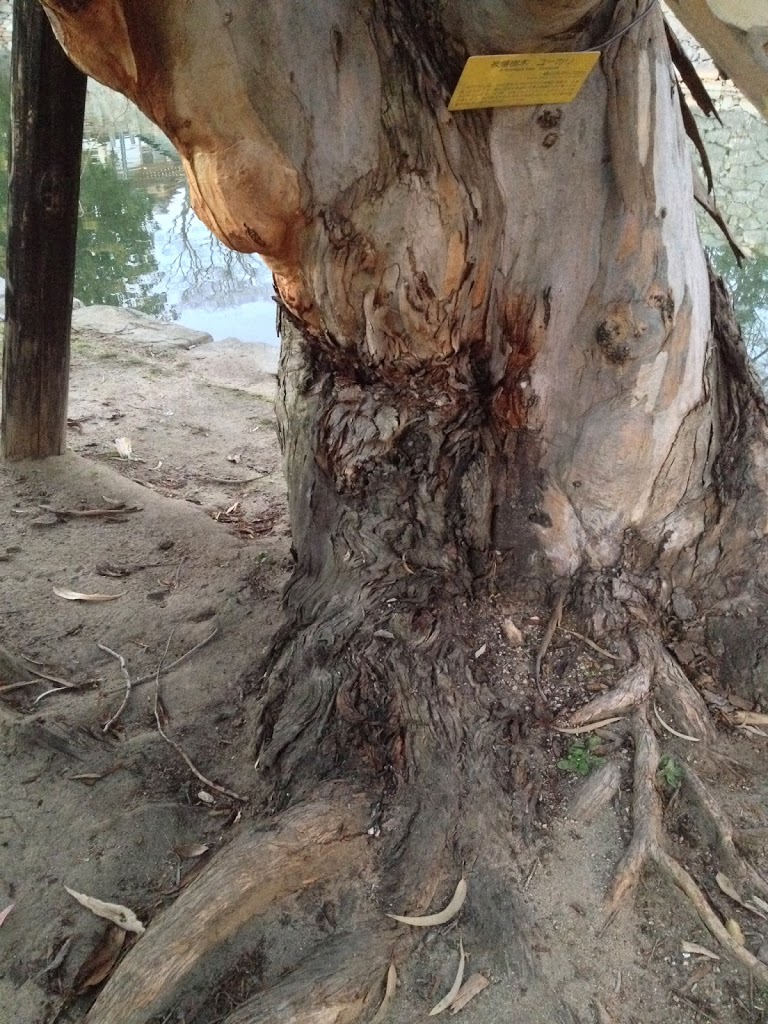 As it turns out, there are only three trees remaining within the blast radius which predate August 6th, 1945. They all stand on the castle grounds, honored by commemorative signs. As we inspected their shattered limbs, I found myself wondering how magnificent they must have looked in their former lives, and how strong they are to have survived until now.

We passed across the beautiful bridge which extends over the moat of the Hiroshima Castle grounds. The ramparts perfectly rebuilt. 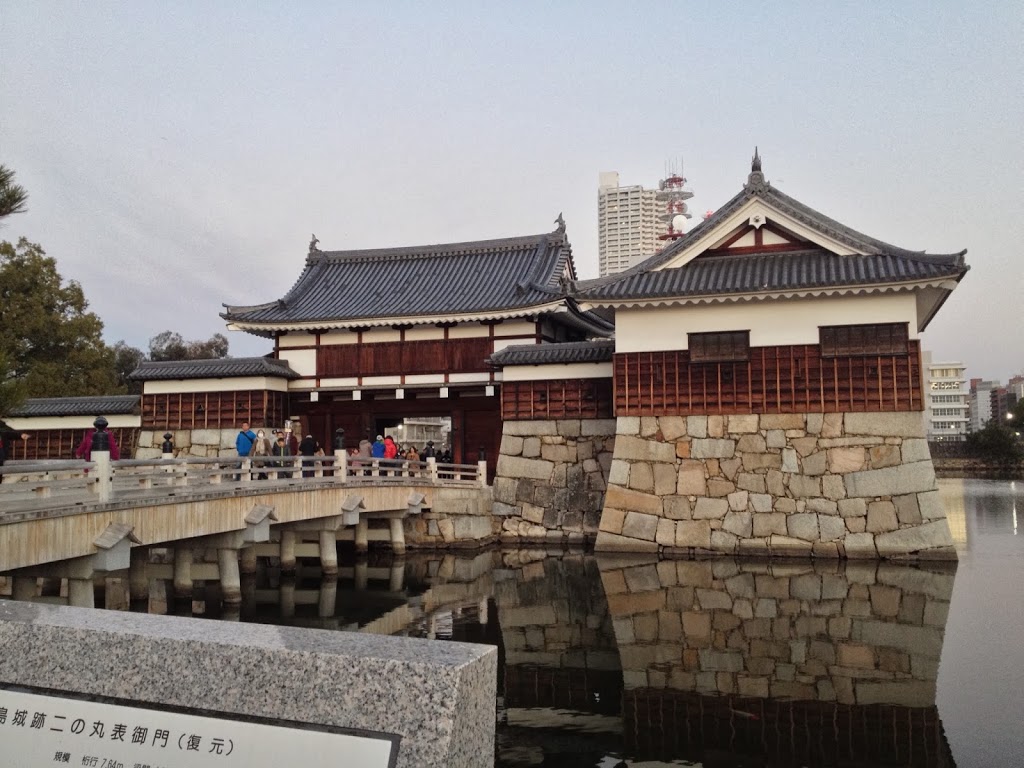 On the way home, we stopped by the Hiroshima Prefectural Art Museum, where Hisachan had once worked as a receptionist.

Though it was closed, it was nice to see a place from her past. I smiled as I imagined her, dressed in a museum uniform, talking to visitors. 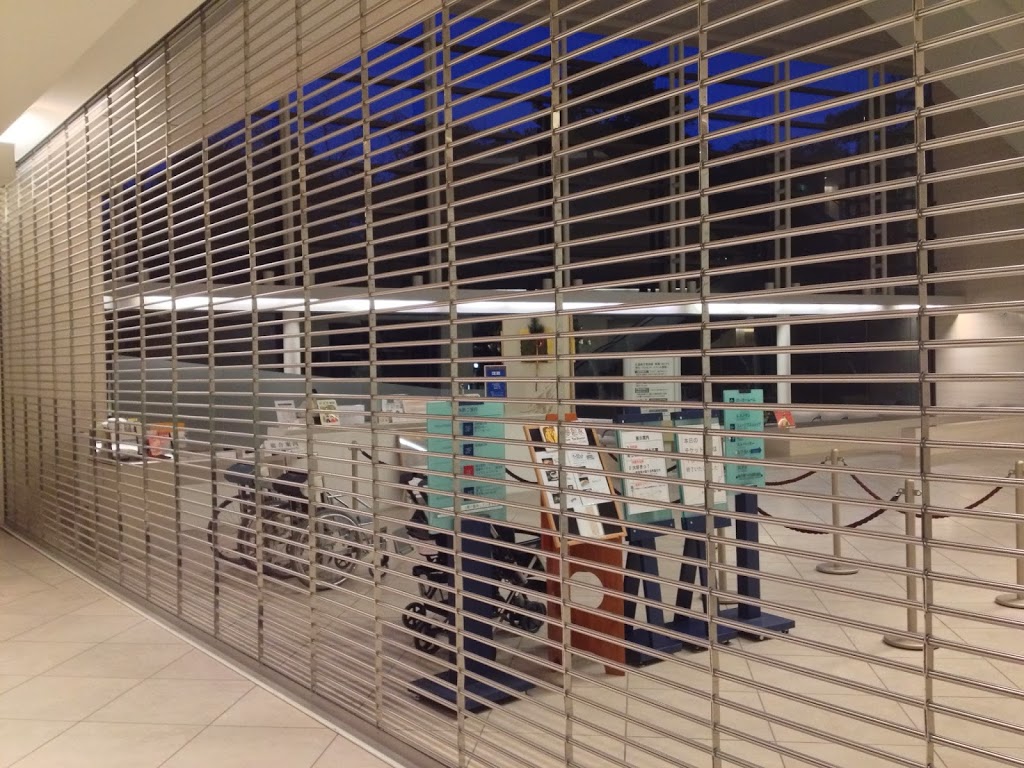 Outside the museum, lanterns glowed softly in the fading twilight. 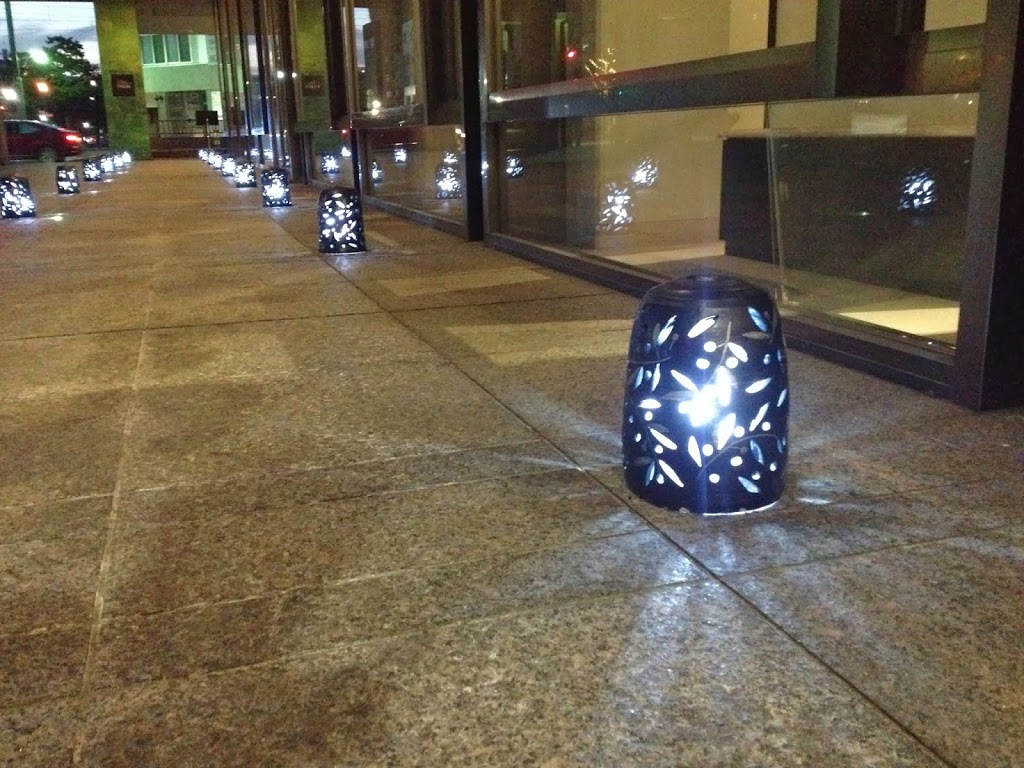 With a few hours until dinner, we decided to wander back through downtown on our way home. But our discoveries there will have to await our next entry…

0 comments on “Former Lives” Add yours →