***Mt. Misen, Part IV***
With morning light falling fresh, the five of us trudged our weary limbs down the pathways of Mt. Misen.

With morning light falling fresh, the five of us trudged our weary limbs down the pathways of Mt. Misen.

Above us lay the mountaintop where we had witnessed the first sunrise of the new year; below us lay the sea, over which we were destined to sail, by ferry boat, back to the mainland of Honshu. 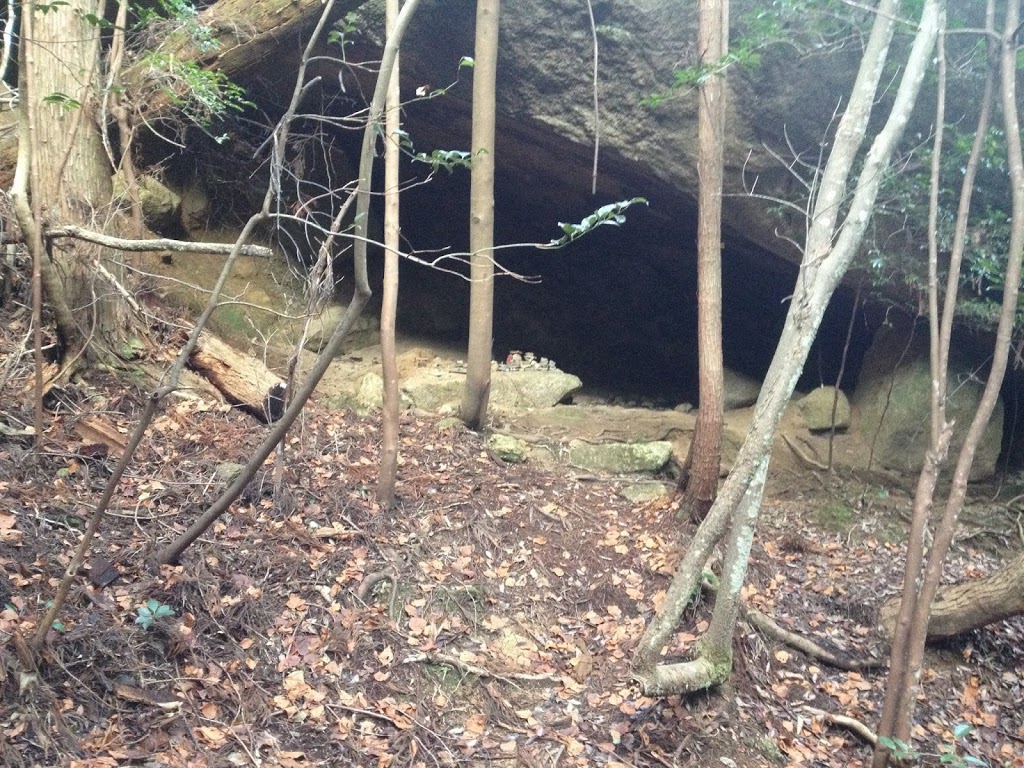 Between daylight explorations of downtown Hiroshima, midnight shrines for New Year’s Eve, and our sunrise vigil on New Year’s morn, we had now been awake for nearly twenty-four hours.

Weary, cold, and pumped full of sugar, we descended to the sea. 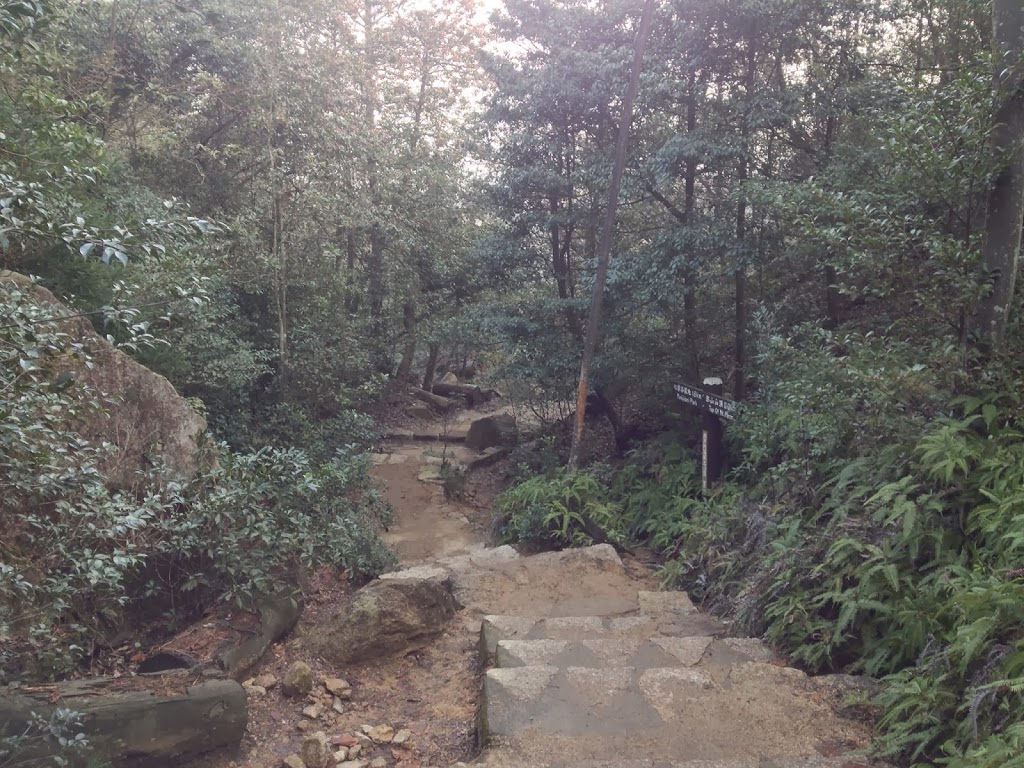 Though our feet had trod over portions of them the night prior, our eyes had yet to be fully acquainted with the rugged expanses of Mt. Misen’s trails. Now, with daylight streaming through the leaves overhead, we found long, steep tracts of crude steps, fashioned from mismatched stones of every shape and size, winding down the mountainside.

In places, these earth-hewn steps had been formed with something approaching regularity, while in others mere fragments, sunken into the mold, provided only the vaguest semblance of stairs.

They were rough, difficult, and tiring, and we launched ourselves down them with reckless rapidity. 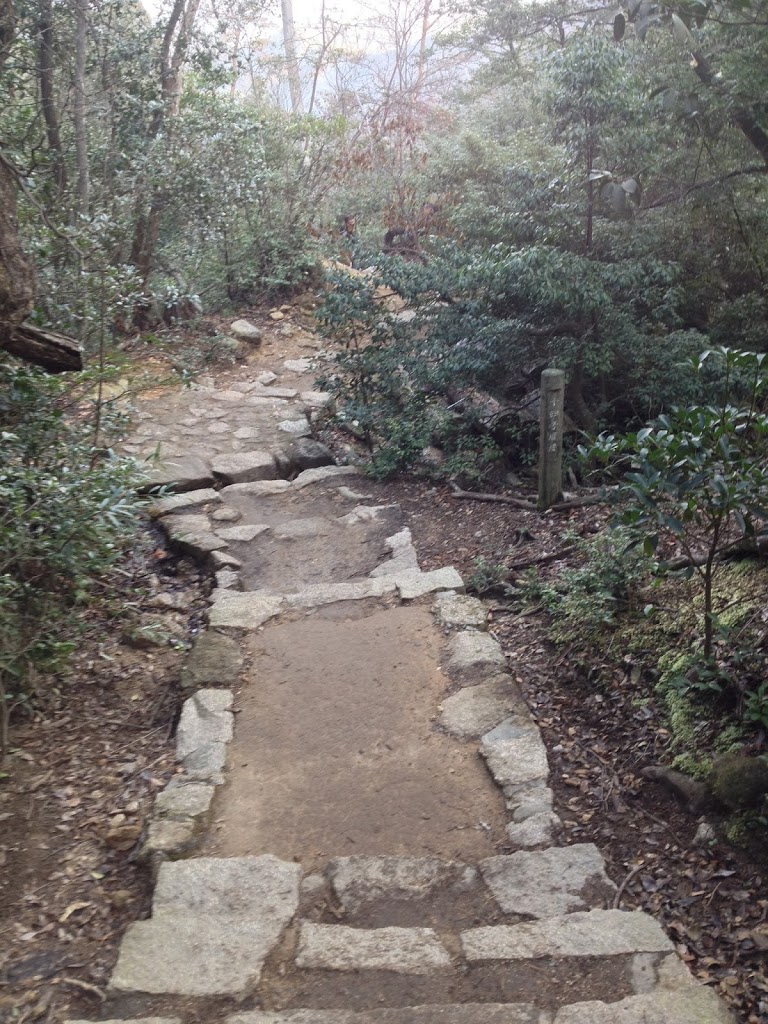 By the time we attained the bottom, we had scampered over a full three kilometers of those rough mountain passes, and could rightfully add physical exhaustion to our damage total. 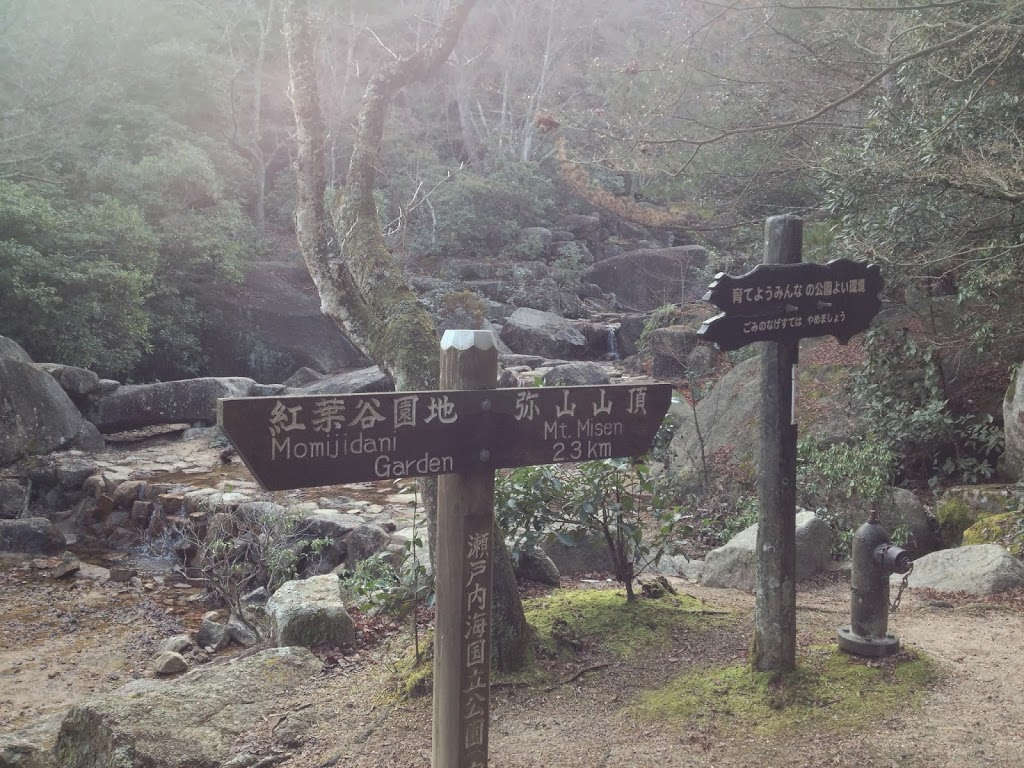 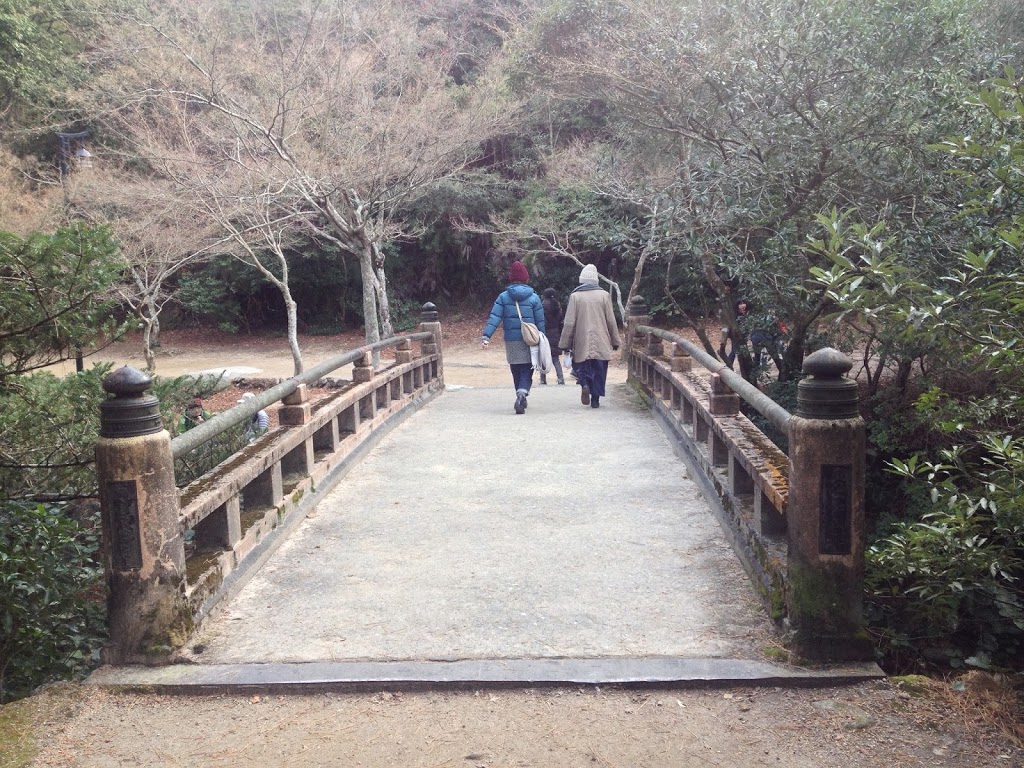 Here we found a lovely park situated beside a mountain stream, where congregations of deer, disturbed more or less constantly by New Year’s revelers, had weathered their own sleepless night on Mt. Misen.

One of them even let me pet her for exactly the amount of time necessary to confirm that I did not have food. 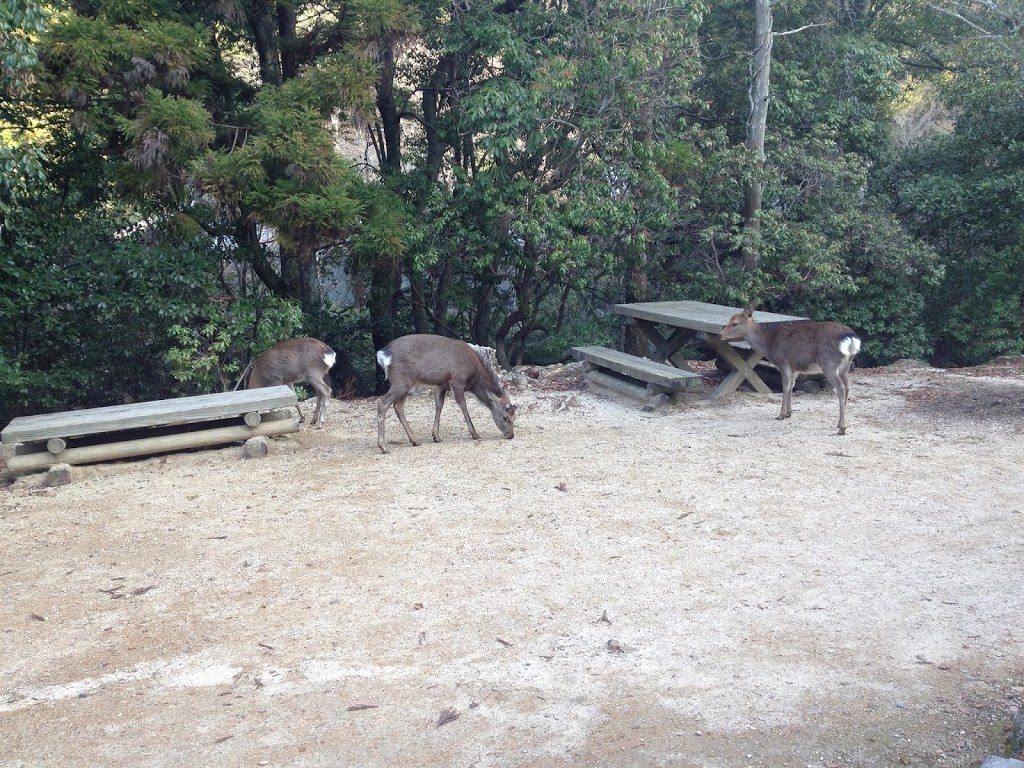 Soon we reached the rear buildings of Itsukushima Shrine, and wound our way to the shore. 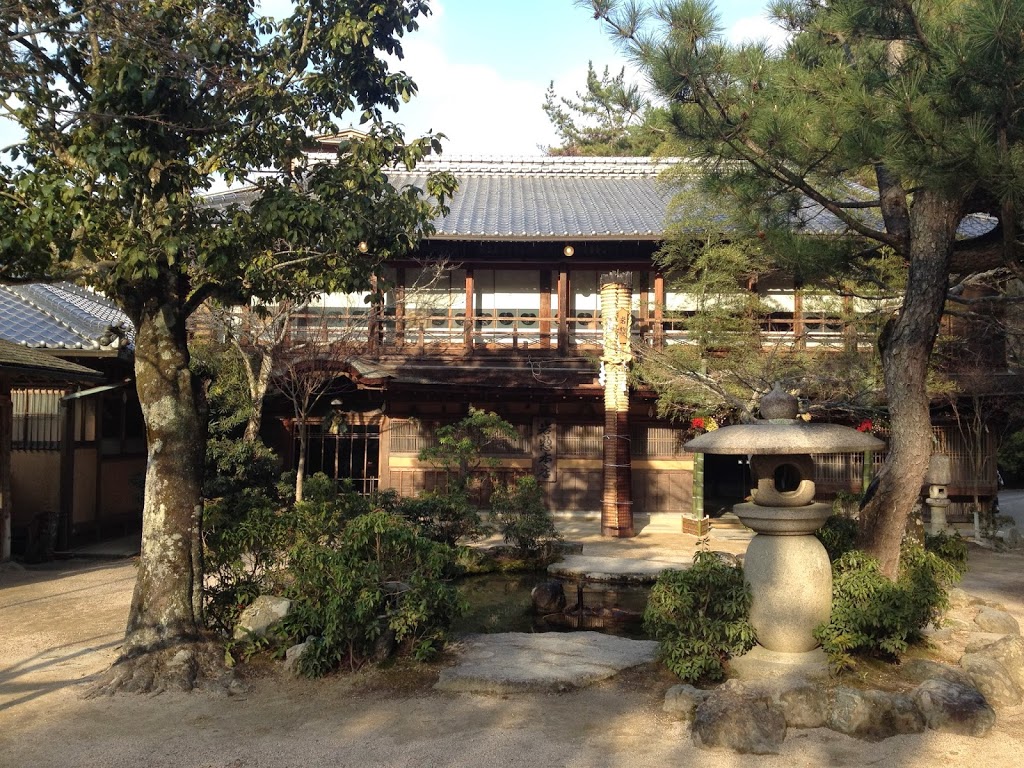 Along the way, we passed shops displaying local crafts of exquisite skill and beauty. 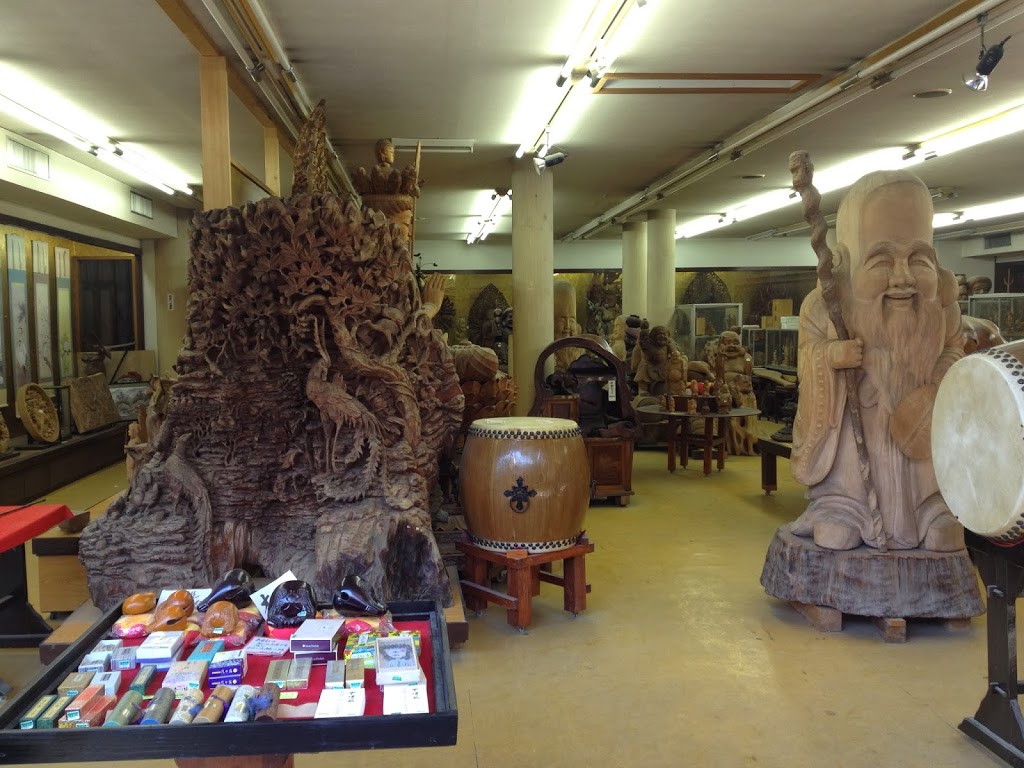 As we approached the main shrine building—the same which we had passed through the night before—we found the tide returned, and those places which had been but barren tracts of dampened earth lay whelmed beneath the glistening swells of the sea. 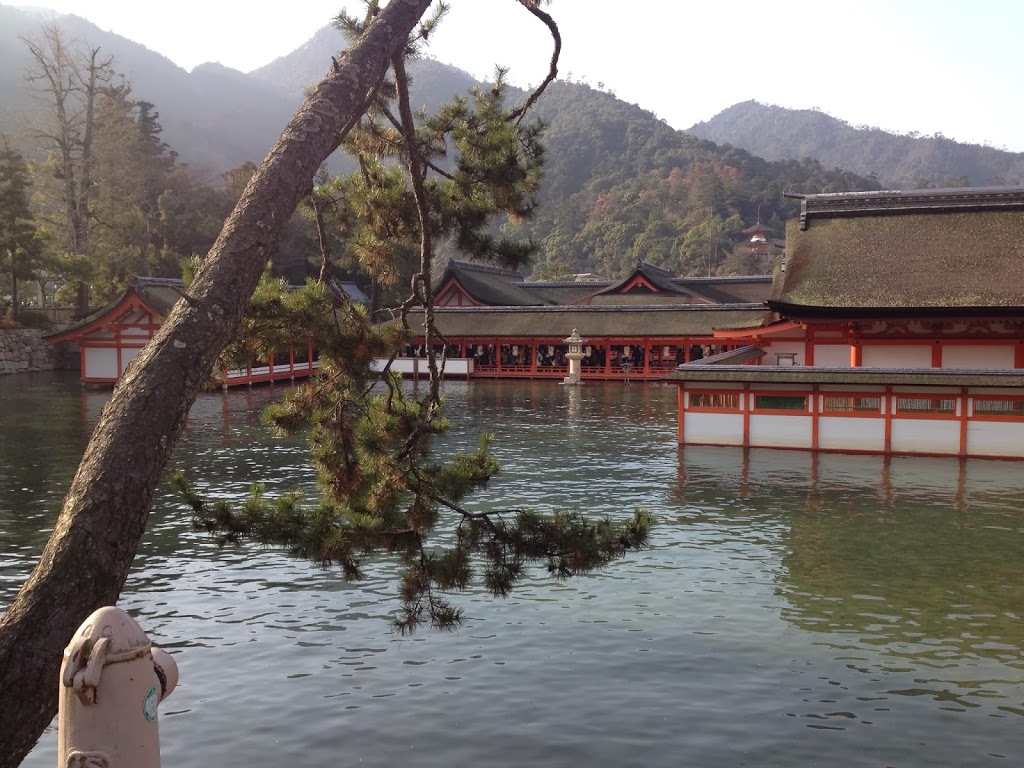 The pagoda of the nearby Temple towered high above us, its red layers swept back against white clouds and blue sky. 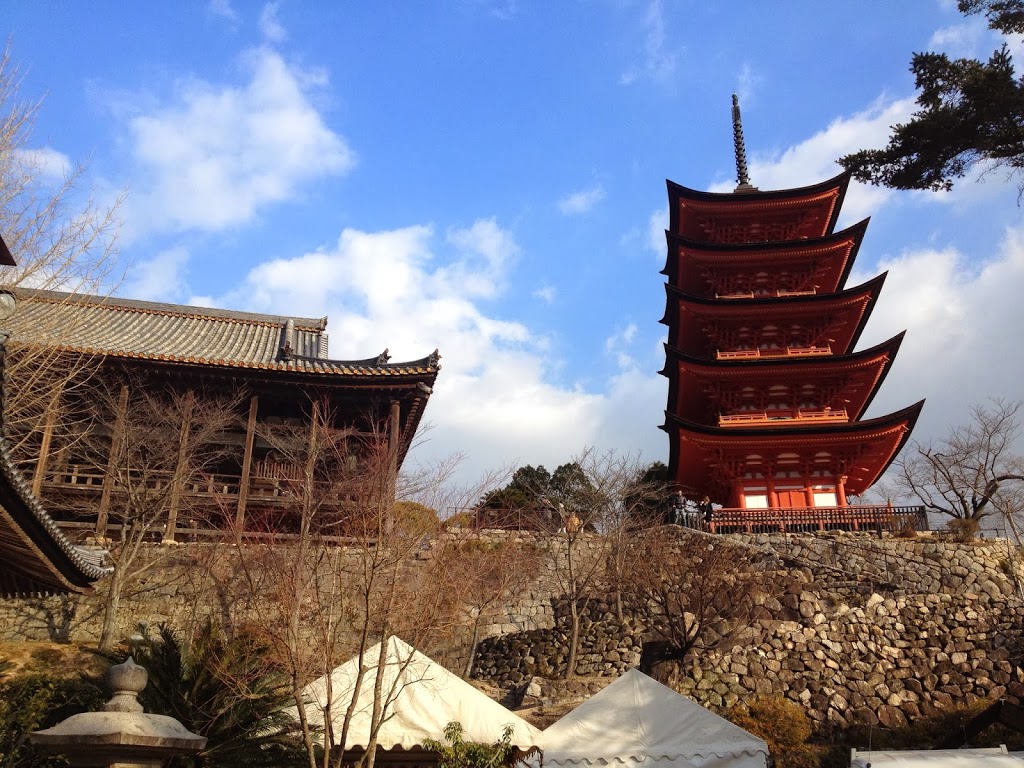 Now countless thousands flocked to the shrine to pay their New Year’s visits, with families, friends, and sweethearts thronging to Miyajima by the boatful. 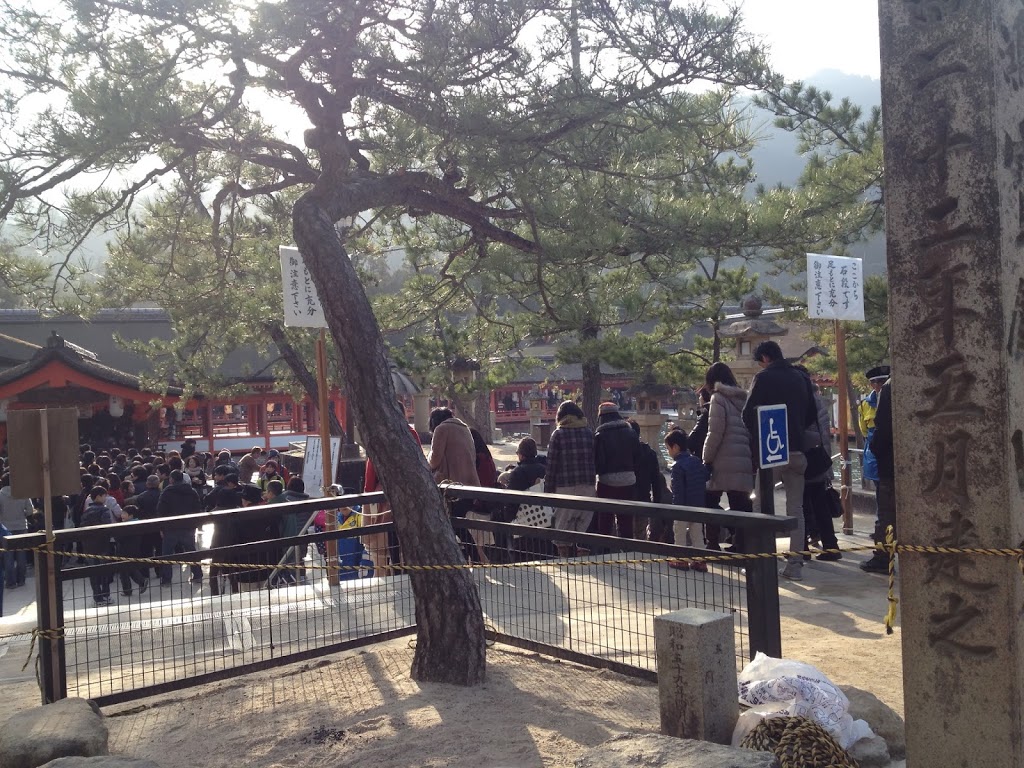 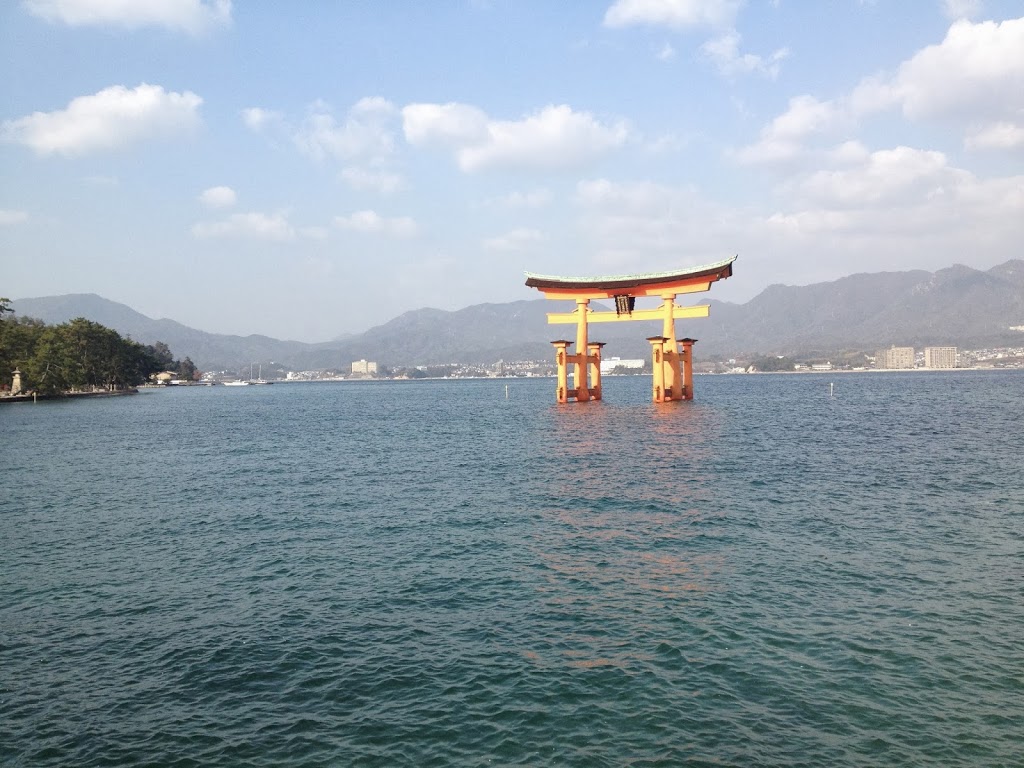 Whether from my own sleep deprivation or simply the overpowering aesthetics of the scene, I cannot say, but more and more I began to feel like I was watching a documentary film about Miyajima rather than trodding its paths in person.

Between the passing crowds of Shrine visitors, and the stunning beauty of the iconic gate rising above the sea, the experience felt overwhelmingly surreal. 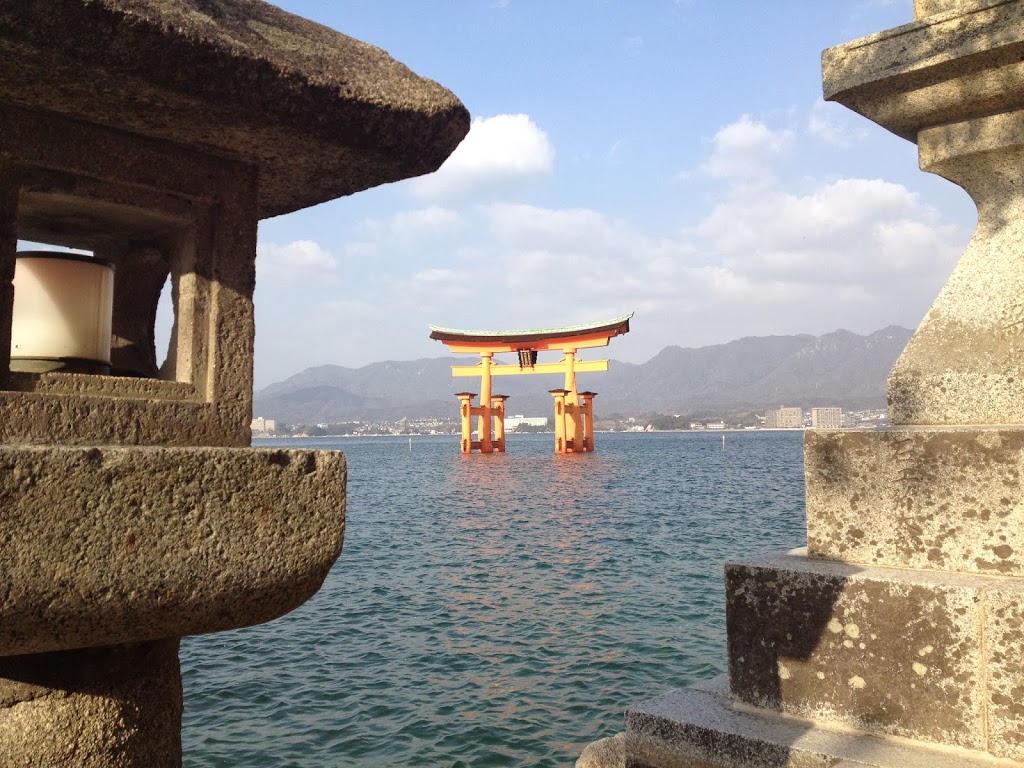 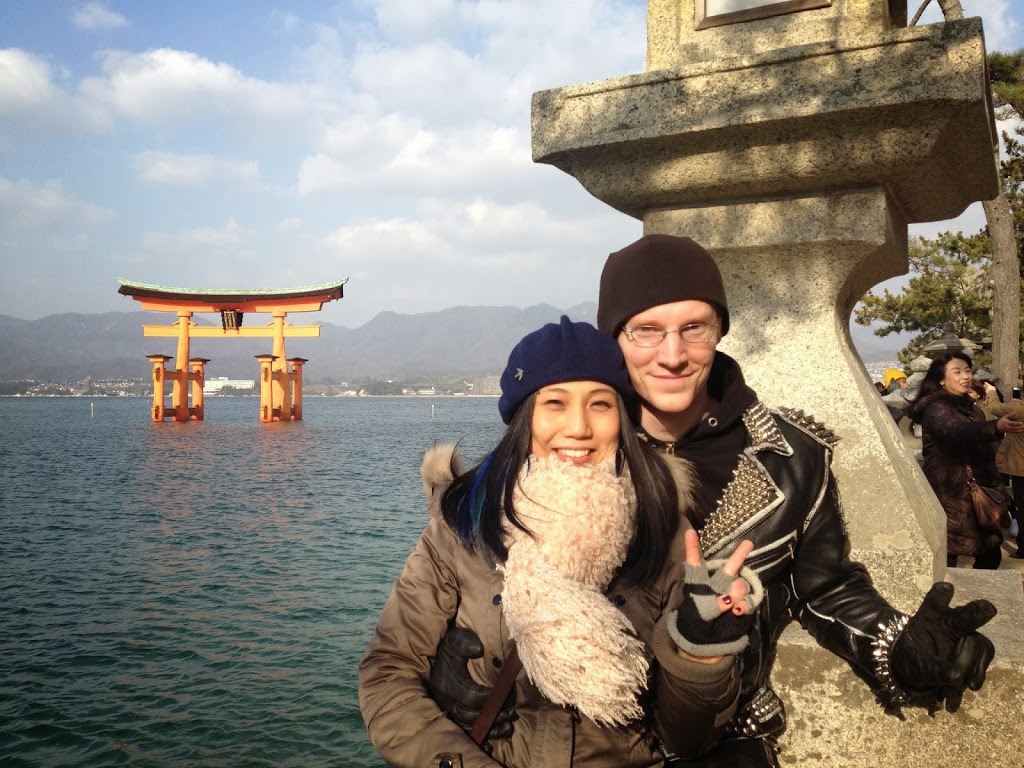 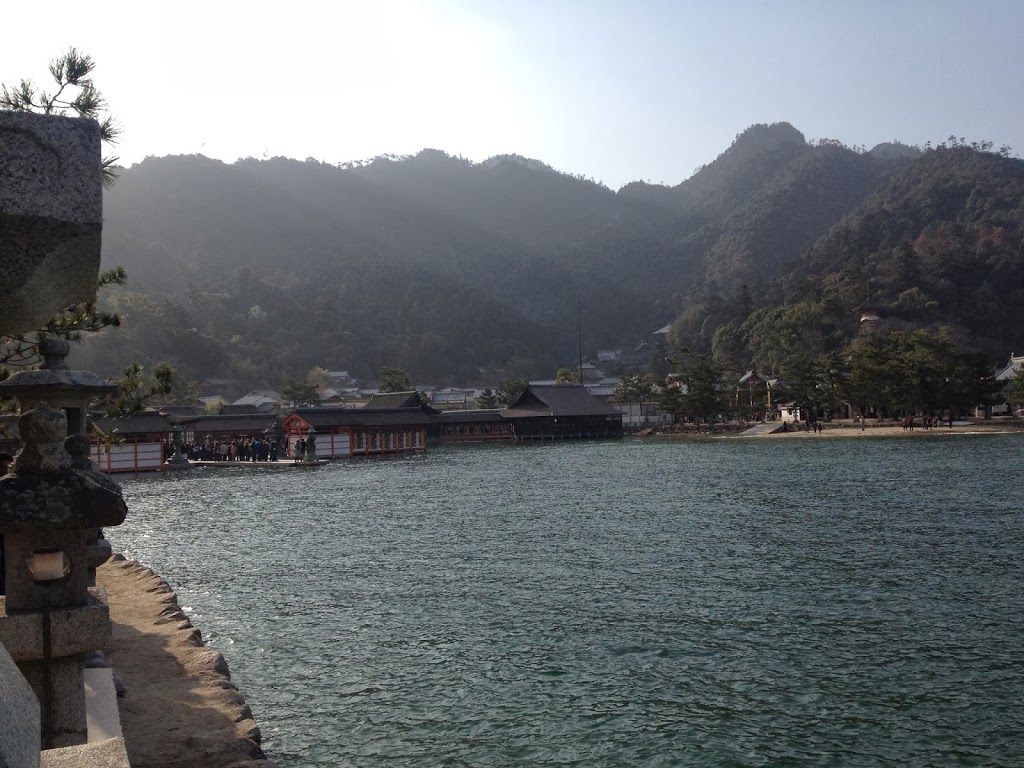 Like me, you may have noticed at some point that Japanese people always walk in small steps, almost with a subtle hopping motion, while Westerners surge forward with a stride.

Navigating the congested throngs at Miyajima, I realized why this is.

The hop directs your momentum upward, the stride forward. In tightly crowded spaces, the hop can halt you on a dime, while the stride leaves you crashing into the person in front of you. The Princess and her companions hopped along through the crowd, and I, unable to do otherwise, hopped along with them.

I felt that I connected in that moment with one portion of the bedrock of what it is to be Japanese. Something deeply cultural which differed entirely from the West. I was not an important individual, I was one part of an important whole. I understood, even if only a little, that day on Miyajima between the sky and sea. 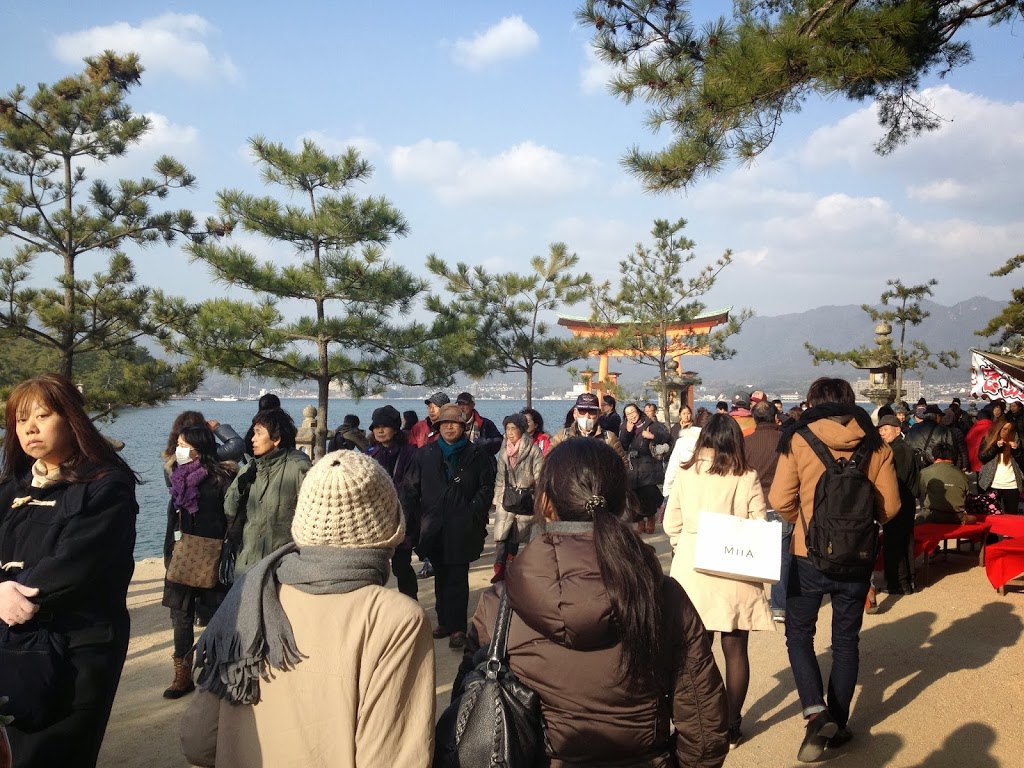 We soon hopped on past the houses of the villagers who live upon the island. Small shops and eateries too lined the way. 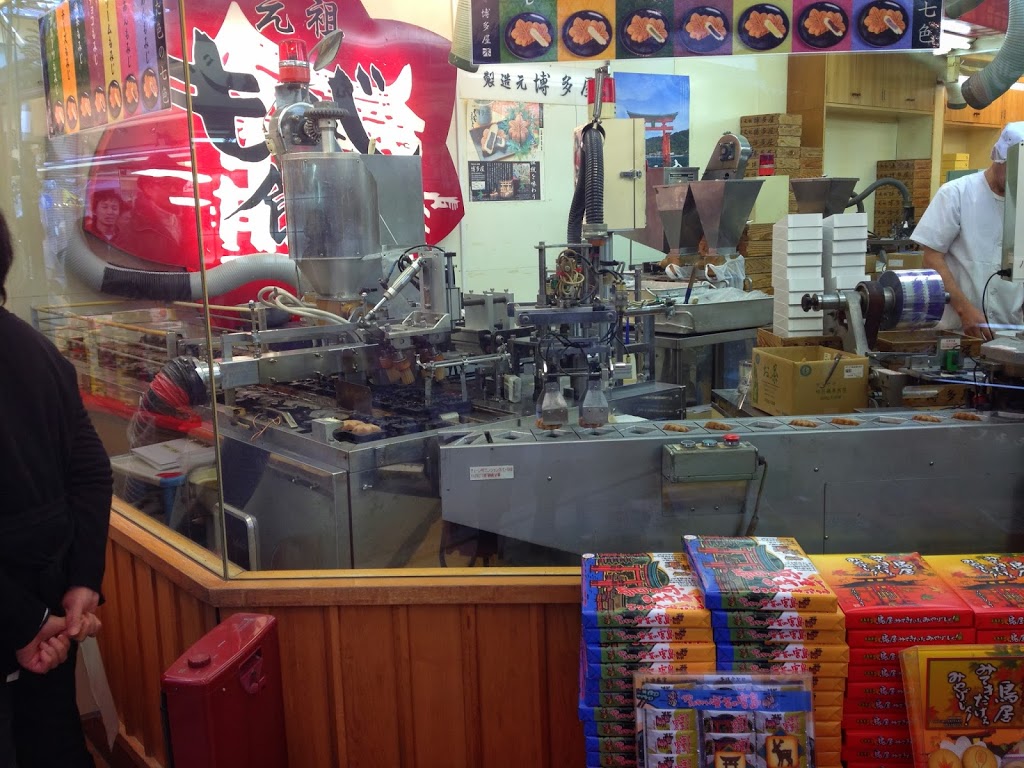 We even found the biggest ass-paddle I’ve ever seen. This must be the one Inari comes after you with if you show up in a shrine with dirty hands.

It was around this time that our sunrise rejoinder of nothing but refined sugar began rapidly wearing off.

In truth, I recall thinking that this was by far and away the most weary I had ever been at any point in the history of my life. I had been awake for over twenty-four hours, had climbed down a mountain on foot, had not eaten anything substantial in the past eight hours, and all the while constantly translating between English and Japanese. I was exhausted in every way imaginable.

I distinctly remember being on the very real verge of laying down next to the deer on the side of the road and giving up entirely. This was not so much a possibility which I was considering, but rather a necessity which I was struggling desperately to avoid.

I am not even kidding.

Mere moments before my impending collapse, we happened upon an udon shop serving lunch, stumbled through the doors, and more or less sank into a table. 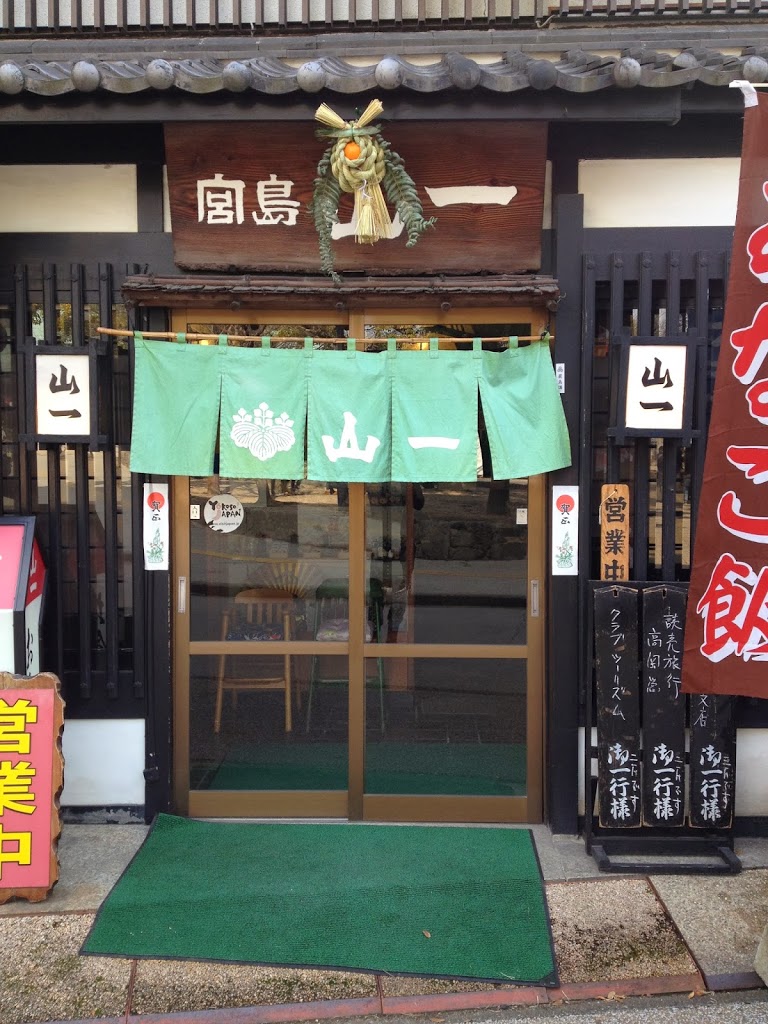 I ordered Kitsune-Udon, the delicious tofu udon dish, and the others likewise made their noodle-laden selections. Tea was brought to the table, hot enough to cauterize a bullet wound of course, and we all sipped at or blew into our cups as our temperature tolerances dictated.

From this point onward, I genuinely began drifting in and out of consciousness, often in the midst of actions and conversations. At least twice I nodded off with udon noodles suspended from my chopsticks, and was once awakened by the sound of my teacup as its bottom, still clenched in my sinking hand, struck the tabletop.

At one point, I even awoke from one of these little naps, and urgently asked The Princess “Where’s Miki-Chyan??”

Miki-Chyan, as it turned out, was sitting directly beside me on the same bench. 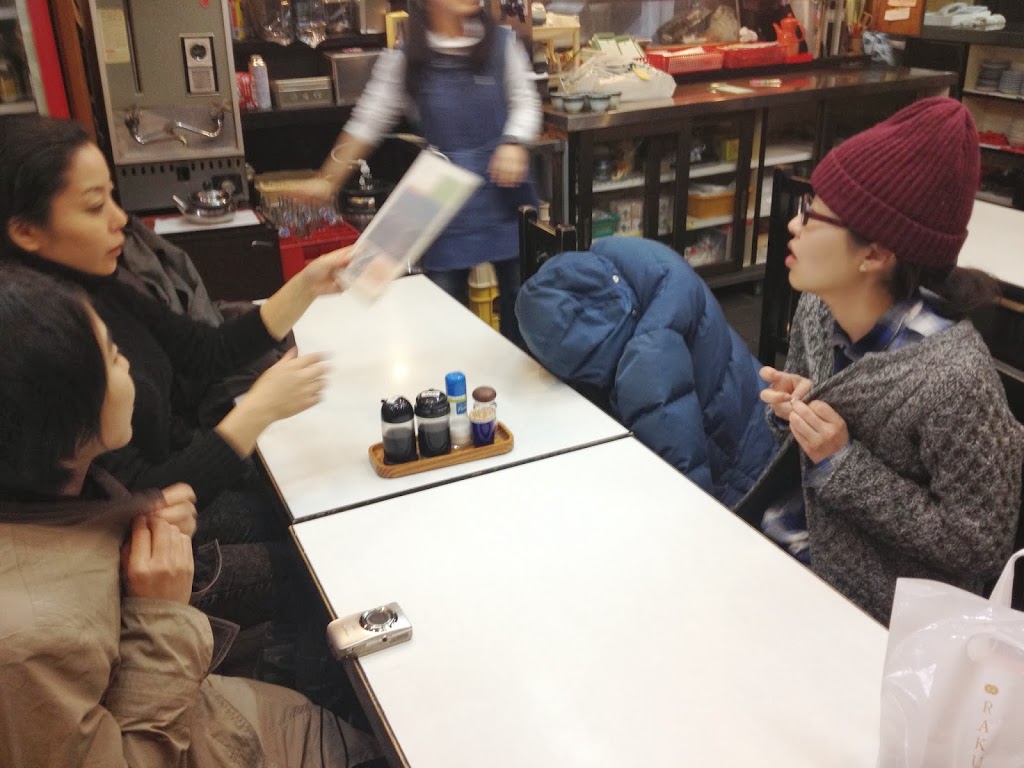 To my credit, I was not alone in these struggles. Yet fortunately, between the five of us, one or more of us managed to be awake at any given moment, and thus we were able to successfully exit Miyajima without having to bed down with the deer.

Departing the udon shop, we passed a Temple or Shrine (I’m not sure which), displaying Japanese flags as a New Year’s decoration. Remarkably, these were the only Japanese flags I saw while in Japan, including Kansai Airport.

Unlike Americans, who enjoy affixing the damned flag to every godforsaken place possible, the Japanese, for whatever reason, don’t feel the same need to constantly remind the citizenry that they are, in fact, still in Japan. I wonder if it’s because they didn’t steal any of it from anyone else in recent memory?

Except Okinawa, I guess. But I digress… 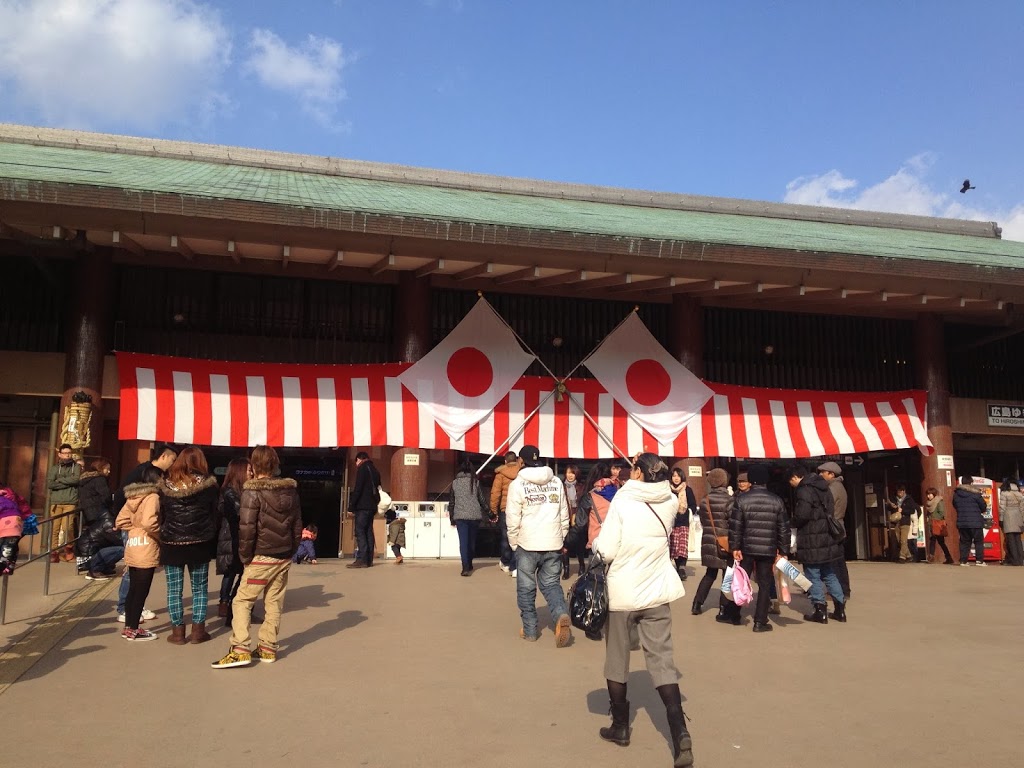 The ferry arrived beneath a soft blue sky, and carried us over the sea to Honshu. 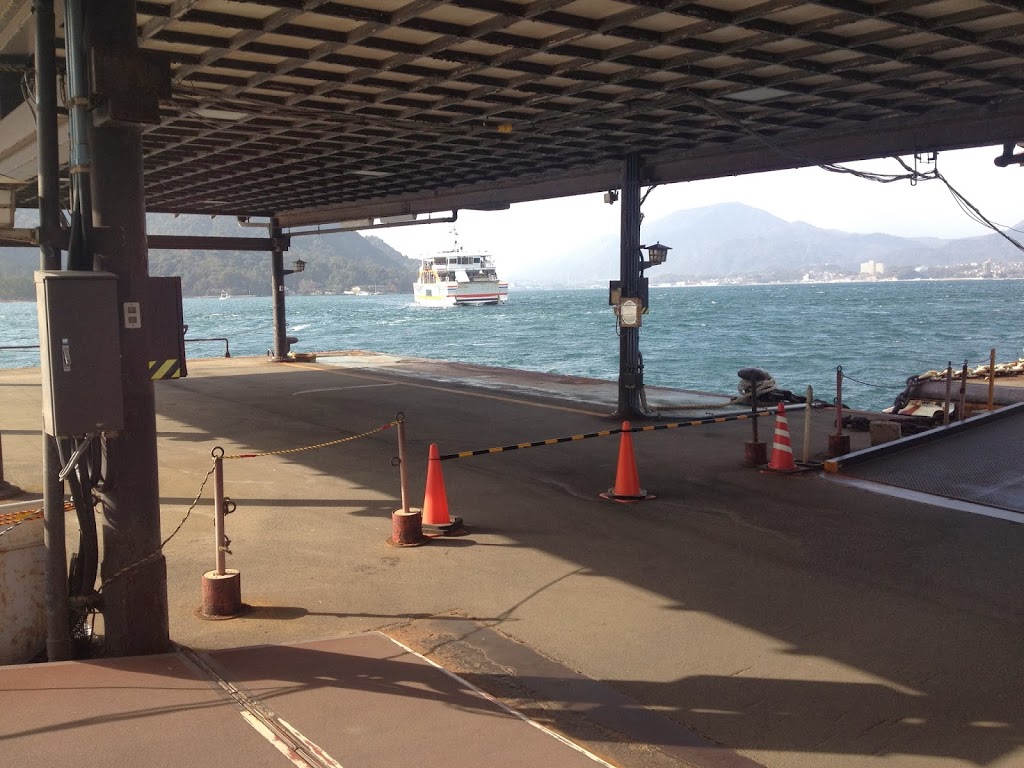 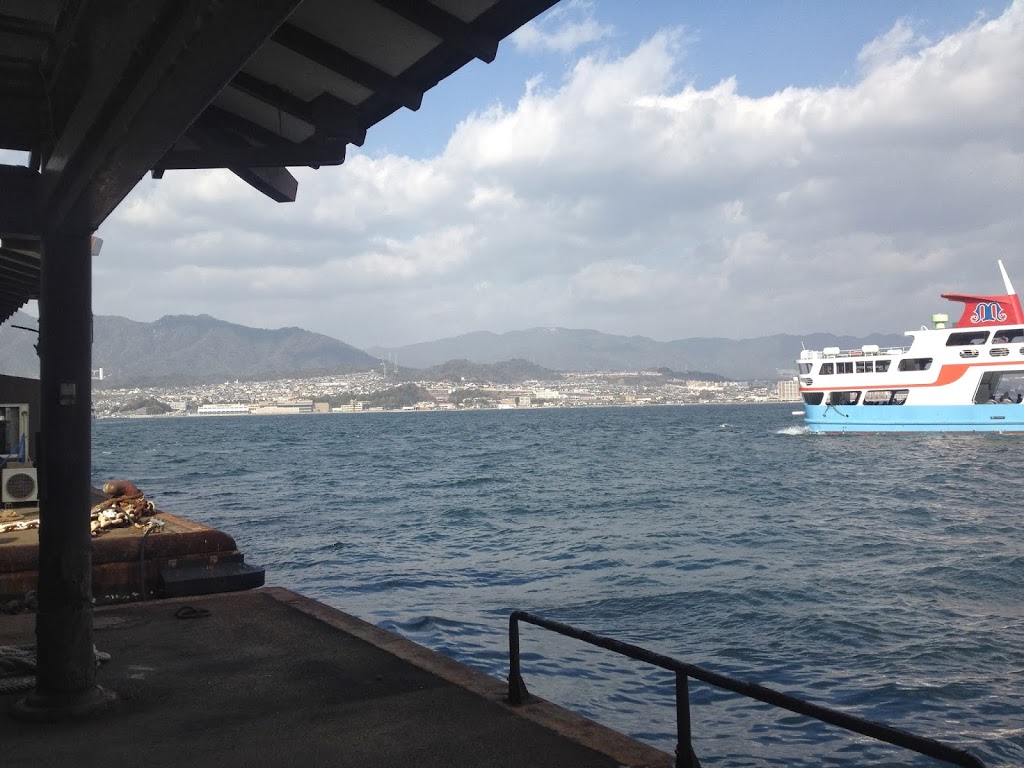 After this, I was too tired to remember to take photos, and recall only fragments of our journey home. We exited the ferry, and boarded a train bound for Hiroshima.

Miki-Chyan and Asa-Chyan each filtered off of the train at their respective stops. Hisachan tucked herself into a seat on the train from which she did not stir until we reached Hiroshima, while Piro-Chyan and I stood near the doors, clinging to the rings which dangled from the ceiling.

I recollect Piro-Chyan unsuccessfully attempting to pull her scarf around herself with one hand while hanging onto a ceiling-ring with the other. I grabbed the end of her scarf and tucked it around her. She seemed surprised by this, but thanked me. “Arigatou.”

Others around us, too, struggled to stay awake, having themselves probably also just watched the sunrise. I remember thinking that the visibly-drowsy lady in front of me didn’t have much to hang onto where she was standing. Shortly after this, I was startled from an unintentional slumber when she fell over onto me. I pulled her up off the floor of the train even as she feebly and profusely apologized.

“Daijyoubu, daijyoubu, it’s all right,” I said, “minna-san wa sugoku tsukareta desu kara… It’s because we are all tired…” My simple words, which placed her in a group of other tired people, provided her with an excuse and comforted her greatly. It is of utmost importance to the Japanese to be part of a group. And unlike Americans, they will NEVER come up with their own excuses for anything.

Though Piro-Chyan witnessed this event, The Princess had slept through it entirely.

Somehow we made it home and ate breakfast. Or maybe it was lunch. Fuck knows. I nodded off between spoonfuls of whatever it was I was eating, until the last bite was finally gone.

That night we would eat Osechii-Ryori, the special New Year’s bento, with Hisachan’s family—but our afternoon belonged to the Land of Nod alone.

Hisachan and I set an alarm for sometime around 5pm, and together plummeted into the deepest gulfs of slumber.

0 comments on “Between Sky and Sea” Add yours →